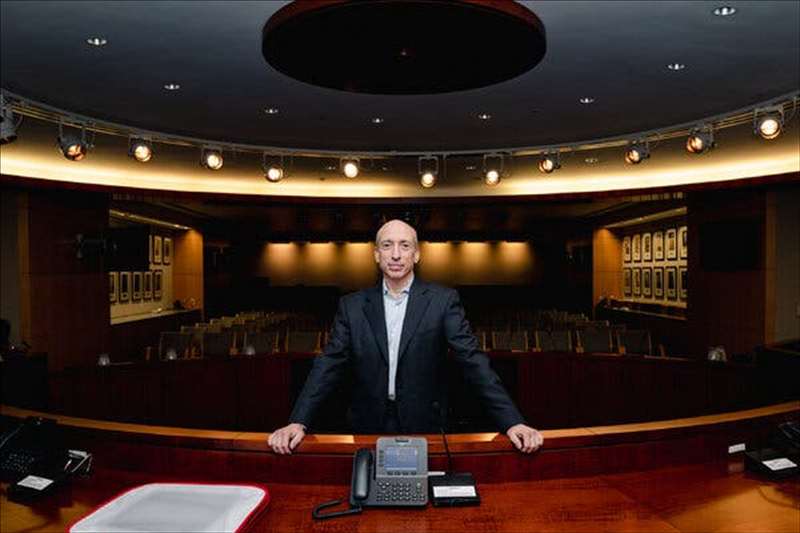 Gary Gensler, the chair of the S.E.C., is at the center of a reckoning over the future of cryptocurrency after the implosion of FTX.

David Yaffe-Bellany, who writes about the crypto industry, reported this story from Washington.

The meeting didn’t go well. Mr. Bankman-Fried, the chief executive of the Bahamas-based crypto exchange FTX, wanted approval from the S.E.C. to offer cryptocurrencies in the United States without the threat of a fine for violating securities rules.

Mr. Bankman-Fried was joined on the call by FTX staff as well as business partners at the stock exchange IEX, who began walking Mr. Gensler through a PowerPoint presentation. At about the second slide, Mr. Gensler cut them off and launched into a roughly 45-minute lecture on his vision for crypto regulation, preventing any further discussion, three people familiar with the conversation said.

“People love a nemesis,” said Sheila Warren, who runs the Crypto Council for Innovation, an industry lobbying group. “He certainly has drawn some of that, almost seemingly deliberately.”

Mr. Gensler declined to answer questions about his handling of FTX.

“There were a lot of entrepreneurs that grew up in this field and chose to be noncompliant,” Mr. Gensler said in an interview last month at the S.E.C. headquarters in Washington. “We will be a cop on the beat.”

Mr. Gensler’s central claim is simple: For all their novel attributes, most cryptocurrencies are securities, like stocks or other investment products. That means the developers who issue cryptocurrencies must register with the U.S. government and disclose information about their plans. In Mr. Gensler’s view, exchanges like Coinbase and FTX, where customers buy and sell digital coins, should also have to obtain S.E.C. licenses, which come with increased legal scrutiny and disclosure obligations.

The crypto industry has fought the government’s efforts to classify digital assets as securities, arguing that the legal requirements are overly burdensome. Even before FTX’s collapse, the debate was reaching an inflection point: A federal judge is expected to rule in the coming months in a lawsuit brought by the S.E.C. that charges the cryptocurrency issuer Ripple with offering unregistered securities. A victory for the government would strengthen Mr. Gensler’s hand, establishing a precedent that could pave the way for more lawsuits against crypto companies.

A former Goldman Sachs partner, Mr. Gensler became one of the most aggressive financial regulators in Washington after the 2008 recession. As chairman of the Commodity Futures Trading Commission, an agency that regulates the financial markets, he helped carry out the 2010 Dodd-Frank Act, which aimed to protect consumers and rein in Wall Street.

Behind closed doors, Mr. Gensler has been equally aggressive. “I’ve heard about other groups going in and getting in arguments,” said Perianne Boring, the founder of the Chamber of Digital Commerce, a crypto advocacy group. “You want to have a fight, you can have one.”

“I was hopeful that an M.I.T. professor who had studied cryptocurrency would have some semblance of fairness about him and not be a complete sociopath,” said Jeremy Kauffman, chief executive of LBRY, which the S.E.C. sued last year.

The basis for Mr. Gensler’s claim that cryptocurrencies are securities is a legal analysis known as the Howey Test, which the Supreme Court outlined in 1946. Under the framework, a financial product is deemed a security when it offers the chance to invest in a “common enterprise” with the expectation of profiting from the efforts of others.

“It’s just straightforward,” he said in the interview last month. “The rules are on the books already.”

Within the agency, Mr. Gensler’s approach has sometimes led to frustration, two people familiar with the S.E.C. said. In meetings, staff members have pointed out the difficulty of extending federal securities law to cover crypto exchanges, one person said. Other S.E.C. employees have complained that Mr. Gensler hasn’t moved aggressively enough, another person said, with exchanges like Coinbase and FTX having avoided significant fines.

But much of the criticism has been opportunistic, said Lee Reiners, a crypto expert who teaches at Duke University Law School.

“If you don’t like him, you don’t like the current S.E.C., then of course you’re just going to blame him, regardless of the facts,” Mr. Reiners said. “If Sam Bankman-Fried tried to get a meeting with the S.E.C., and Gary Gensler said absolutely not, I’ll never talk to you, the Republicans would’ve gone ballistic prior to the collapse.”

In public remarks shortly after FTX imploded, Mr. Gensler argued that too many crypto companies performed multiple financial roles at the same time — like running an exchange and making trades, an apparent reference to the close relationship between FTX and Alameda.

“Why we often separate these things out is so that the public is better protected about the inherent conflicts,” he said. “It’s really important to make sure that this field comes in, gets registered, gets regulated.”

“Not liking the answer from the S.E.C.,” he shot back, “doesn’t mean there isn’t guidance.”