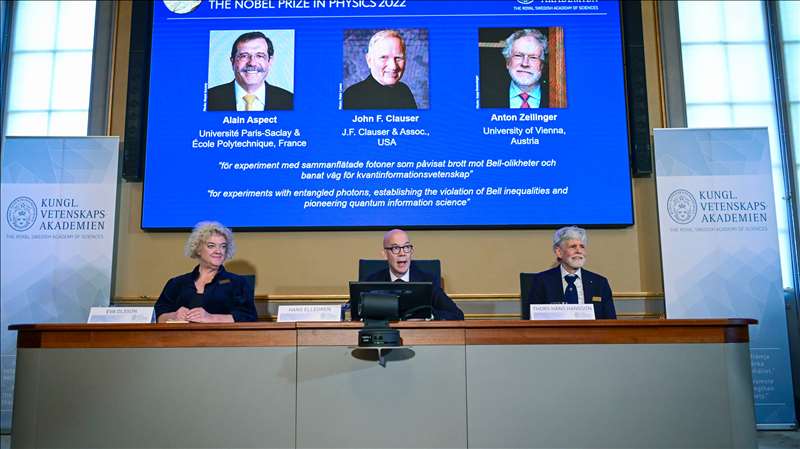 Alain Aspect, John F. Clauser and Anton Zeilinger were recognized for their experiments in an area that has broad implications for secure information transfer and quantum computing.

Three physicists whose works each showed that nature is even weirder than Einstein had dared to imagine have been named winners of the 2022 Nobel Prize in Physics.

John Clauser, of J.F. Clauser and Associates in Walnut Creek, Calif.; Alain Aspect of the Institut d’Optique in Palaiseau, France; and Anton Zeilinger of the University of Vienna in Austria, will split a prize of 10 million Swedish kronor.

Their independent works explored the foundations of quantum mechanics, the paradoxical rules that govern behavior in the subatomic world. In experiments conducted over the last 50 years, they confirmed the reality of an effect that Albert Einstein had disdained as “spooky action at a distance.” Measuring one of a widely separated pair of particles could instantaneously change the results of measuring the other particle, even if it was light-years away. Today, physicists call this strange effect quantum entanglement, and it is the basis of the burgeoning field of quantum information. When the award winners were announced on Tuesday, Eva Olsson, a member of the Nobel Committee for Physics, noted that quantum information science had broad implications in areas like cryptography and quantum computing.

Quantum information science is a “vibrant and rapidly developing field,” she said. “Its predictions have opened doors to another world, and it has also shaken the very foundation of how we interpret measurements.”

As Daniel Kabat, a physics professor at Lehman College in New York, explained recently, “We’re used to thinking that information about an object — say that a glass is half full — is somehow contained within the object.” Instead, he says, entanglement means objects “only exist in relation to other objects, and moreover these relationships are encoded in a wave function that stands outside the tangible physical universe.”

In a conversation with the Nobel committee Tuesday morning, Dr. Aspect said he had been looking for a limit on quantum mechanics but had not found it.

“I am accepting in my mental images something which is totally crazy,” he said.

Quantum mechanics arose in the early decades of the 20th century, a period often called the Second Scientific Revolution, as scientists tried to understand the inner lives of atoms. Its centerpiece was the uncertainty principle, enunciated by Werner Heisenberg in 1927, which states that certain types of knowledge — of a particle’s position and velocity, for example — are incompatible: The more precisely one property is measured, the blurrier and more uncertain the other becomes.

Einstein, though one of the founders of quantum theory, rejected it, saying famously, God did not play dice with the universe.

In a 1935 paper written with Boris Podolsky and Nathan Rosen, he tried to demolish quantum mechanics as an incomplete theory by pointing out that by quantum rules, measuring a particle in one place could instantly affect measurements of the other particle, even if it was millions of miles away.

This was a philosophical argument about the nature of reality until 1964, when John Stewart Bell, a theoretical physicist at CERN who also was skeptical about the claims of quantum mechanics, described — but did not perform — an experiment that could test whether Einstein or quantum mechanics was right.

Dr. Clauser, who has a knack for electronics and experimentation and misgivings about quantum theory, was the first to perform Bell’s proposed experiment. He happened upon Dr. Bell’s paper while a graduate student at Columbia University and recognized it as something he could do.

In 1972, using duct tape and spare parts in the basement on the campus of the University of California, Berkeley, Dr. Clauser and a graduate student, Stuart Freedman, who died in 2012, endeavored to perform Bell’s experiment to measure quantum entanglement. In a series of experiments, he fired thousands of light particles, or photons, in opposite directions to measure a property known as polarization, which could have only two values — up or down. The result for each detector was always a series of seemingly random ups and downs. But when the two detectors’ results were compared, the ups and downs matched in ways that neither “classical physics” nor Einstein’s laws could explain. Something weird was afoot in the universe. Entanglement seemed to be real.

At the time, most physicists weren’t interested in arguing about the meaning of quantum mechanics, as they were busy using it to build atomic bombs and transistors.

“He had to have a lot of stick-to-itiveness to publish his result,” Dr. Kaiser said on Tuesday.

In an interview with the American Institute of Physics in 2002, Dr. Clauser admitted that he himself had expected quantum mechanics to be wrong and Einstein to be right. “Obviously, we got the ‘wrong’ result. I had no choice but to report what we saw, you know, ‘Here’s the result.’ But it contradicts what I believed in my gut has to be true.” He added, “I hoped we would overthrow quantum mechanics. Everyone else thought, ‘John, you’re totally nuts.’”

The catch in Dr. Clauser’s discovery and the quantum mechanical description of this spooky action was that the correlations only showed up after the measurements of the individual particles, when the physicists compared their results after the fact. Entanglement seemed real, but it could not be used to communicate information faster than the speed of light.

Dr. Clauser spent much of the decade worrying about what loopholes he might have overlooked. One possibility, which was called the locality loophole, was that the laboratory instruments might have been leaking information to each other.

In 1982, Dr. Aspect and his team at the University of Paris tried to outfox Dr. Clauser’s loophole by switching the direction along which the photons’ polarizations were measured every 10 nanoseconds, while the photons were already in the air and too fast for them to communicate with each other. He too, was expecting Einstein to be right.

Dr. Aspect’s results put entanglement on the map as a real phenomenon that physicists and engineers could use. Quantum predictions held true, but there were still more possible loopholes in the Bell experiment that Dr. Clauser had identified and which needed to be closed before quantum physicists could declare victory over Einstein.

For example, the polarization directions in Dr. Aspect’s experiment had been changed in a regular and thus theoretically predictable fashion that could be sensed by the photons or detectors.

It was then that Anton Zeilinger — a professor at the University of Vienna, who with his group has emerged as perhaps the leading ringmaster of quantum trickery — picked up the baton. In 1998, he added even more randomness to the Bell experiment, using random number generators to change the direction of the polarization measurements while the entangled particles were in flight.

Still, there remained other possible sources of criticism or bias, including some over free will and whether the experimenters or the experiments had been influenced by underlying causes. In recent years, Dr. Zeilinger and his collaborators have been performing “Cosmic Bell” experiments by using fluctuations in the light of distant objects called quasars billions of light-years from here as random number generators to set the detector directions.

By now, as scientists have done more experiments with entangled particles, entanglement is accepted as one of main features of quantum mechanics and is being put to work in cryptology, quantum computing and an upcoming “quantum internet” to the tune of more than a billion dollars a year. One of its first successes in cryptology is messages sent using entangled pairs, which can send cryptographic keys in a secure manner — any eavesdropping will destroy the entanglement, alerting the receiver that something is wrong.

In 2017, Dr. Zeilinger used this technique with entangled photons beamed from a Chinese satellite called Micius to have an encrypted 75-minute video conversation with Jian-Wei Pan of the Chinese Academy of Sciences, one of his former students.

When receiving the Nobel Prize on Tuesday, Dr. Zeilinger acknowledged the more than 100 young people who had worked for him over the years and described receiving the award as “an encouragement to young people.”

Though he acknowledged that the award was honoring the future applications of his work, he said, “My advice would be: Do what you find interesting, and don’t care too much about possible applications.”

However, with quantum mechanics, just because we can use it, doesn’t mean our ape brains understand it. The pioneering quantum physicist Niels Bohr once said that anyone who didn’t think quantum mechanics was outrageous hadn’t understood what was being said.