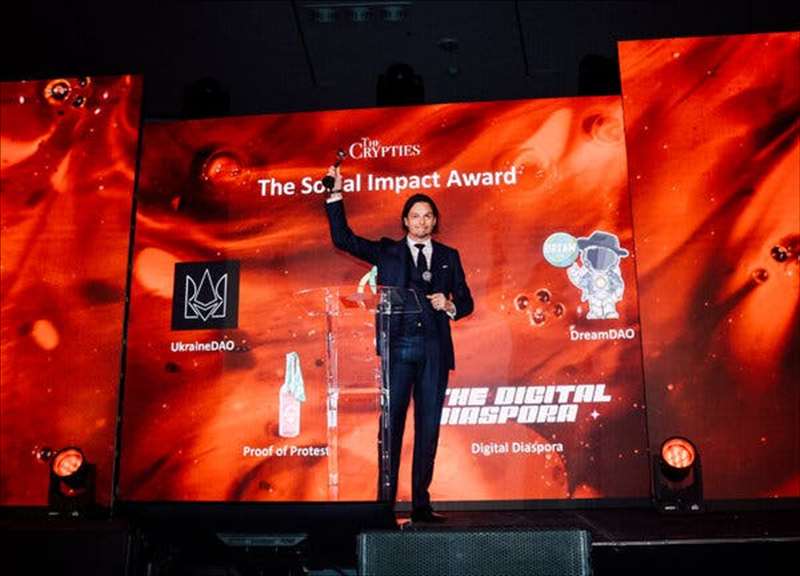 The Crypties was intended as a gala evening in Miami to celebrate the currencies of the future. It turned out to be more of a roast.

MIAMI — It was not the ideal time for a celebration of the cryptocurrency industry. But the hall was booked, the guests had arrived, and so the show went on.

By night’s end, they would learn the winners in 10 categories, including NFT Project of the Year and Metaverse Project of the Year. The event was organized by Decrypt Studios, a film and production company financed by Joseph Lubin, a co-founder of the cryptocurrency platform Ethereum.

The red carpet outside the venue wasn’t exactly teeming with photographers, but what were the organizers going to do if not try to make the best of things?

“In the financial markets, there’s always risk,” said Alanna Roazzi-Laforet, the founder of Decrypt Studios, who stood in the corner of a large cocktail area on the Forum’s second floor, sipping a hurricane.

The dress code was Black Tie Optional. But in an industry where anything other than sweatpants is considered formal, and the person hired as the gala’s M.C. was Josh Ostrovsky, the comedian known as The Fat Jewish, the emphasis fell squarely on optional.

At around 7 p.m., a D.J. played Avicii’s remix of Coldplay’s “A Sky Full Of Stars,” accompanied by a violinist who goes by the name Tamara. Waiters served miniature lobster rolls. The guests’ cocktail chatter alternated between gallows humor and proselytizing about the inevitable transformation of humankind through next-gen tech.

Josh Thompson, who runs two companies that use the blockchain to spur community activism, Gotham Labs and Civics Unplugged, was among the attendees. One minute, he was introducing himself to a reporter as none other than Mr. Bankman-Fried. The next, he was saying that, despite a disastrous year for cryptocurrency, the industry’s future looked bright indeed.

“It’s my anticrypto crypto project,” she said. “The technology is here. It’s not going away, but a lot of the gambling-addicted degenerates are. I think that’s a good thing.”

Moments later, guests headed upstairs to a white domed space that looked like an art-deco planetarium. On the stage, a trio of massive LCD screens displayed volcanolike images meant to conjure an idea about the disruptive metaverse. EDM was still blaring when a voice boomed from the speakers.

“Good evening, Miami,” it said. “Where is Sam Bankman-Fried?”

Moments later, The Fat Jewish walked onto the stage and launched into a searing monologue. “This event is in Florida, the home of the natural disaster,” he said. “And tonight, we’re going to celebrate a man-made one: cryptocurrency.”

“Your skeptical friends and your out-of-touch parents have told you that cryptocurrency was a passing fad and that all of these coins one day would be totally worthless,” he continued. “Right? But tonight, here at the Faena Forum, we defiantly say, ‘Only some of them!’ Right? Am I right?”

But first, The Fat Jewish said, he was going to take a page from the Oscars playbook and start with an in memoriam tribute to all the celebrities whose entries into the crypto space over the last year seemed to augur its decline.

“They might not be dead,” he said. “But their dreams of striking it rich in crypto definitely are.”

As it turned out, the person who presented the first Cryptie award was Avery Akkineni, the president of another one of Mr. Vaynerchuk’s companies, Vayner3. In what was definitely not the evening’s warmest exchange, Ms. Akkineni strode onto the stage, gave a terse acknowledgment to The Fat Jewish and defended her boss, Mr. Vaynerchuk, calling him a “complete pleasure” to work for.

Several awards were given out to people who are doing things on the blockchain that run in contrast to the much publicized get-rich-quick schemes.

In his remarks from the stage, Mr. Calderon professed hope that people would not chase overnight successes but would play “the long game” and “walk a straight line.”

It was hard to know what to make of such utopian talk when, moments later, The Fat Jewish returned to the stage and implored people in the audience to scream out the stupidest things they had bought, back when crypto was going “straight to the moon.” Someone at the back of the room yelled out: “A zebra!”

At each place setting was a small black jewel box containing an unusual party favor: a tiny diamond stud. There was also an authenticity card, complete with a QR code. With a click of a phone camera, guests landed on a webpage thanking them for having “stuck around for the bear,” meaning the bear market, and for having attended the first Cryptie Awards, which aims to be an annual gala. The message further promised that each diamond had been “tested, measured, weighed, labeled and packaged for shipment.”

“Nothing,” Mr. Cheng said, laughing. “Same as your crypto!”