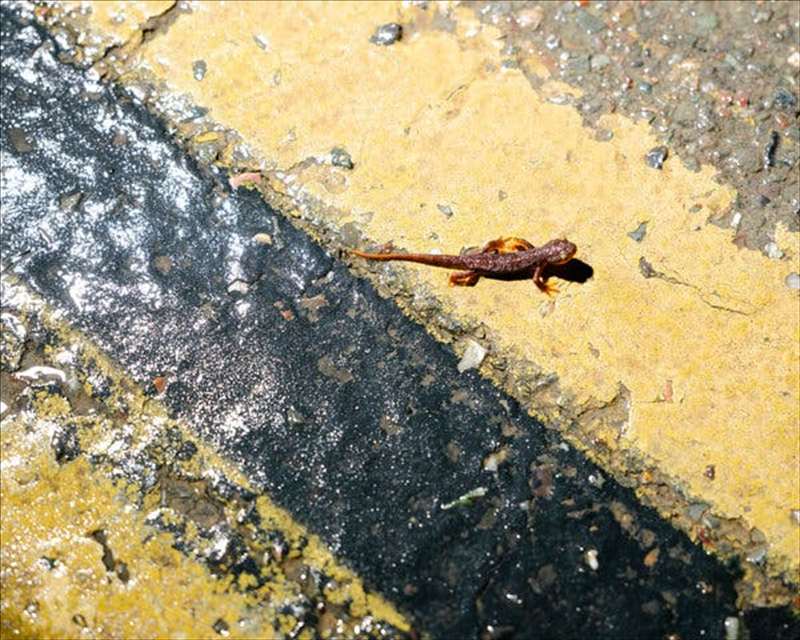 Salamanders get a little help across the road from some two-legged friends in Northern California.

But north of San Francisco, the town of Petaluma was spared the worst of the storms. There, the rain has been a boon for newts. The torrential downpours spurred thousands of California and rough-skinned newts to emerge from their burrows and set out in search of a lake, stream, pond or puddle to breed in. And for the first time in many years, the newts have a plethora of water bodies to choose from.

For the past four years, volunteers have spent their winter nights shepherding newts across a one-mile stretch of Chileno Valley Road, a winding country road in the hills of Petaluma. They call themselves the Chileno Valley Newt Brigade, and their founder, Sally Gale, says they will keep showing up until the newts no longer need them.

On a warm, wet evening in early December, Ms. Gale and her fellow brigaders gathered to do what they do best: save newts. Wearing reflective vests and armed with flashlights and buckets, Ms. Gale and her brigaders split up into groups and began scouring Chileno Valley Road. The conditions were perfect for newts. It had just rained and the temperature was a brisk 55 degrees.

The volunteers knew it was going to be what they call “a big night.” As expected, dozens of wriggling, tiny orange bodies began appearing on the road. The newts were coming from both sides of the road. While some were adults headed to nearby Laguna Lake to breed, most were juveniles who were leaving the lake for the first time.

“This road is right in their migratory path,” Ms. Gale said. Although the road is in a rural area nestled between farms and forests, it gets enough traffic to pose a serious threat to the newts. “It’s important to build safe passages for all kinds of animals, whether it’s a little tiny newt or a big beautiful mountain lion,” Ms. Gale said.

Even though the Chileno Valley Newt Brigade surveys this road nearly every night during newt breeding season, which runs from November through March, hundreds of newts die on Chileno Valley Road each year.

Four years ago, Ms. Gale, who runs a cattle ranch in the area, was driving home from dinner with her husband when she spotted several newts trying to cross the road. Concerned for their safety, Ms. Gale got out of the car and started moving them out of harm’s way. As she walked, she noticed the flattened bodies of dozens of newts that had been run over. The experience inspired her to start the newt brigade, which has since amassed dozens of dedicated members.

On busy nights, as many as 24 volunteers gather on the road to spend their evening shepherding newts to safety.

“It’s such a huge cross-section of people, and we haven’t met a bad one yet,” said Katie Brammer, a graphic designer and newt brigade captain. Among her fellow volunteers are schoolteachers, students, naturalists, business owners and retirees.

Ms. Brammer and her husband, Rick Stubblefield, have been newt brigade captains for just over a year. They say it’s the charisma of the newts that got them hooked on helping.

“California newts are quite endearing,” Ms. Brammer said. “They hold onto your hand as you’re carrying them across the road.”

Once the documenting is done, they pick the newt up with gloved hands, place it into a bucket and transport it to the side of the road it was headed toward. They also document any dead newts they find and scrape their remains off the road using spatulas.

As they ferry newts from one side of the road to the other, the volunteers often converse with their passengers. “They talk to each newt they pick up and say ‘hello there’ and ‘I’m going to carry you across the road,’” Ms. Brammer said. “I love hearing it.”

On that brisk December evening, after two hours on patrol, the Chileno Valley Newt Brigade had transported 452 live newts and disposed of 54 dead ones, a ratio the volunteers were happy to see.

Since Thanksgiving, the group has helped nearly 6,000 newts complete their migration. They have also documented just over 1,300 newts killed by cars. Ms. Gale is proud of the work she and her fellow brigaders do, but she knows it’s not a perfect solution.

“We know that improving our roads to allow safe passage for amphibians will cost millions,” Ms. Gale said, “but we intend to raise whatever amount is needed to save the newts and other imperiled creatures.”