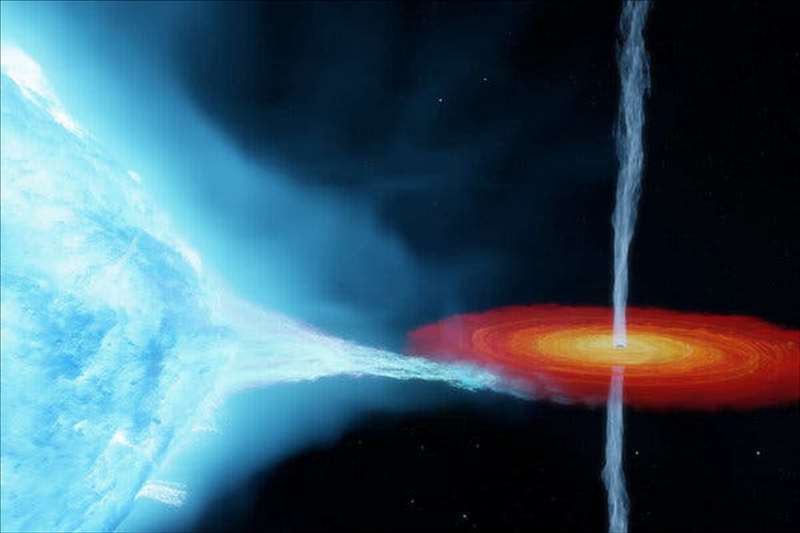 Cygnus X-1, one of the first identified black holes, is much weightier than expected, raising new questions about how such objects form.

One of the biggest and first known black holes in the Milky Way galaxy is more massive than astronomers thought, a team of scientists announced on Thursday. The finding throws a wrench into long-held models of how massive stars evolve on the way to the ultimate doom.

Cygnus X-1, an unseen, X-ray-emitting object, and a fat blue star called HDE 226868 circle each other every 5.6 days. Cygnus X-1 was one of the earliest celestial sources of X-rays ever discovered, in 1964, when astronomers began lofting cosmic Geiger counters into space, and one of the first to be considered as a possible black hole. The X-rays are produced by gas that is heated to millions of degrees as it swirls around the cosmic drain.

With a mass originally estimated at 15 times that of the sun, Cygnus X-1 is one of the most massive and most luminous of the X-ray binary systems known in the Milky Way.

New measurements have now raised that figure to 21 solar masses. The makeover does not change the overall perception of the cosmos; Cygnus X-1 is still a black hole, an almost science-fictional manifestation of Einsteinian weirdness in celestial reality. But the details of how Cygnus X-1 became a black hole are now in doubt.

“A significant change in the mass of such a classic and historical astronomical source is a big deal (at least to astronomers),” Daniel Holz, a theoretical astrophysicist at the University of Chicago who was not part of the study, wrote in an email.

Also by email, James Miller-Jones of the International Center for Radio Astronomy Research at Curtin University in Australia wrote: “We realized that a 21-solar-mass black hole was too massive to form in the Milky Way with the best existing estimates of the amount of mass lost by massive stars in stellar winds.”

As one of the papers recounts, the story of Cygnus X-1 starts in the dim past with a pair of massive blue stars orbiting each other. The bigger of the two stars evolved faster, expanded and began spilling hydrogen gas onto its companion star. What remained of the primary star, which started out in its prime with a mass of 55 or 75 times that of the sun, shed more of its mass in fierce stellar winds as its core kept burning. Finally, having exhausted all of its thermonuclear fuel, the spent star collapsed into a black hole.

Since then, the black hole has been feeding, pulling in gas from its puffed-up neighbor, which, with roughly 40 solar masses, has a lot to give, according to Dr. Miller-Jones.

The new measurement of the mass of Cygnus X-1 was serendipitous. “We had not set out to remeasure the distance and black-hole mass,” Dr. Miller-Jones said. “But when we had analyzed our data, we realized its full potential.”

In the spring of 2016, Dr. Miller-Jones and his group spent six days observing Cygnus X-1 with the National Radio Astronomy Observatory’s Very Long Baseline Array, a nationwide network of antennas operated out of Socorro, N.M. They were trying to investigate the connection between X-ray-emitting gas flowing into the black hole and high-speed radio jets shooting out of it.

But part of the process allowed them to triangulate the distance to Cygnus X-1, increasing it from about 6,000 light-years to a little over 7,000. Interestingly, Dr. Miller-James noted, this also brought the distance into better agreement with early results from the European Space Agency’s Gaia space telescope, whose measurements had been in mild tension with the previously accepted distance.

When that change in distance was factored into the calculations of luminosity and mass, the black hole’s estimated mass grew by about 40 percent, to 21 solar masses.

That was exciting, Dr. Miller-Jones said, but it was not until he talked to a theoretical colleague, Ilya Mandel of Monash University, that he appreciated the full implications of what they had done.

The new estimate of mass put Cygnus X-1 above a kind of magic threshold. Astronomers know of a few dozen black hole X-ray binary systems in the Milky Way and nearby, all of which have imputed masses of less than 20 times that of the sun. That apparent limit suggested that it was hard for black holes to grow more massive, at least from the collapse of stars.

“When the very first GW detection turned out to be a binary composed of two black holes, each of approximately 30 solar masses, it came as a profound shock to many in the community,” wrote Dr. Holz, who is part of a large team studying those results.

The contradiction was glaring. The LIGO results suggested that, in general, black holes were more massive than the X-ray results suggested. Much of what is assumed about stellar evolution comes from imagining the details of the cosmic winds that strip mass from dying stars as they sputter out and become black holes. The new results suggest that astronomers need to pare back their calculations of how stars lose their mass.

“Having revised the mass of the black hole in Cygnus X-1 upward,” Dr. Miller-Jones said, “we realized that we would need to revise downward the mass-loss rate of massive stars in order to explain our measurements. This was the key insight that led us to write this paper, demonstrating the power of scientific collaboration, bringing a diverse range of skills together to attack an interesting problem.”

Dr. Holz said he was not worried on behalf of the astronomers. The astrophysics of stellar evolution is very complicated, he noted, offering many knobs to turn in the calculations to help the results make sense. “As for making a black hole of this mass, my guess is that stellar modelers will be able to accommodate it without too much trouble,” he said. “They are a very creative bunch!”