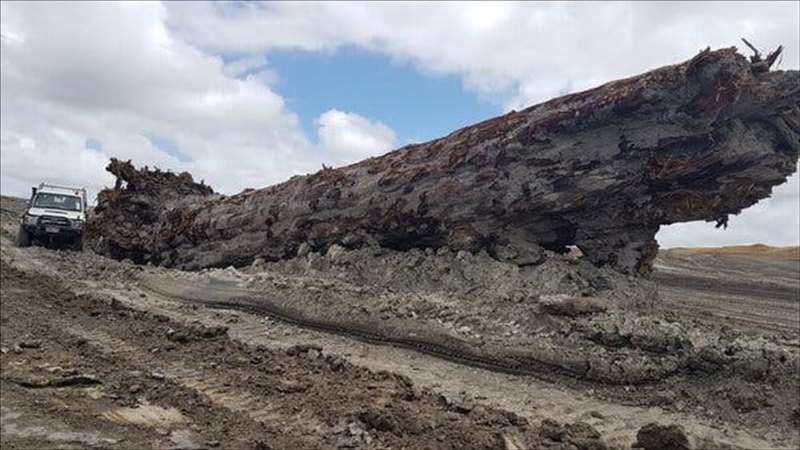 A shift in Earth’s poles 42,000 years ago may have drastically altered the planet’s climate, scientists have found — and they’re naming the period after the author Douglas Adams.

Through it all, one giant kauri tree stood tall — until, after nearly two millenniums, it died and fell in a swamp, where the chemical records embedded in its flesh were immaculately preserved. That tree, unearthed a few years ago near Ngawha Springs in northern New Zealand, finally allowed researchers to fit a tight timeline to what before had seemed like an intriguing but only vaguely correlated series of events.

What if, the researchers posited, the crash of the magnetic field spawned the climatic changes of that era? And to think that the Ngawha kauri tree had borne witness to the whole thing.

By comparing tree-ring age data and radioactive carbon concentrations from that kauri tree and three others of similar vintage to recent dating information derived from two stalagmites in the Hulu caves in China, Dr. Turney and his 32 co-authors were able to pinpoint when the tree lived and died. That gave them what they call a “calibration curve,” allowing them to convert radiocarbon dating from that period into calendar years.

Scientists across disciplines said the kauri data were a dazzling addition to the radiocarbon canon and were long awaited.

“For a radiocarbon person, the kauri records are just amazing,” said Luke C. Skinner, a paleoclimatologist at the University of Cambridge, who was not involved in the study. He said the fossil kauri trees were the main way for scientists to get at radiocarbon information from so long ago.

The tree lived through a lengthy disintegration of the magnetic field, a period known as the Laschamp excursion, when the magnetic poles attempted unsuccessfully to switch places. As a result, Dr. Turney and his co-authors were able to use the new data to describe more precisely when that excursion happened and trace what else was going on, including the bizarre climate and extinctions.

“It was suddenly, gosh, these things actually are happening simultaneously around the world, all at the same time,” Dr. Turney said. “It was just an extraordinary revelation.”

That discovery unlocked a multipronged thought experiment. Earth’s magnetic field, which is constantly being generated deep within the planet’s molten outer core, protects against dangerous galactic and solar rays. Were all those peculiar climatic, biological and archaeological phenomena 42,000 years ago linked to the wasted magnetic field? Had its collapse altered the course of life on Earth? And what about other disturbances of the magnetic field, including that time 780,000 years ago when the magnetic poles actually did switch places?

Scientists have been trying to find answers to these questions since the fact of magnetic pole reversals was established several decades ago. Consequently, this latest endeavor has drawn immense scrutiny.

“It’s pretty brave,” said Catherine G. Constable, a geophysicist at the Scripps Institution of Oceanography in San Diego, who was not involved in the study.

Using cutting-edge global climate model simulations that allowed for chemistry interactions, Dr. Turney and his colleagues used the timeline generated by the kauri tree to try to find out what the climate was like during the excursion.

The data revealed “modest but significant changes in atmospheric chemistry and climate,” according to the paper. Among them: a slightly depleted ozone layer; slightly increased ultraviolet radiation, particularly near the Equator; a jump in tissue-damaging ionizing radiation; and auroras as close to the Equator as the 40th Parallels of latitude, which would run through the middle of the continental United States in the Northern Hemisphere and through the bottom tip of Australia in the south.

Adding a period of low sun activity, known as grand solar minima, into the mix produced more dramatic effects. A peculiar, century-long series of deposits of beryllium-10 isotopes has been identified in ice cores from Greenland, dating from the Laschamp excursion 42,000 years ago. Such isotopes are created when cosmic rays batter the upper atmosphere; in the geological record they indicate times when Earth experienced a diminished magnetic field and, sometimes, solar changes.

In the more extreme computer scenario, with solar effects factored in, ultraviolet radiation rose by 10 to 15 percent from the norm and ozone declined by about the same amount. Those effects cascaded through the climate system, Dr. Turney said:

The simulations suggest that the weakened magnetic field caused some of the climatic changes of 42,000 years ago, and that those changes may have had wider impacts: prompting the extinction of many large mammals in Australia, hastening the end of the Neanderthals, and perhaps giving rise to cave art as humans hid for long periods to avoid skin-damaging ultraviolet rays, the authors proposed.

In fact, the effects were striking that the researchers have given a new name to the years leading up to the middle of the Laschamp excursion. They call it the Adams Transitional Geomagnetic Event.

“The Adams Event appears to represent a major climatic, environmental and archaeological boundary that has previously gone unrecognized,” the team writes, concluding, “Overall, these findings raise important questions about the evolutionary impacts of geomagnetic reversals and excursions throughout the deeper geologic record.”

The new name is a homage to the British humorist Douglas Adams, author of “The Hitchhiker’s Guide to the Galaxy” and the book and radio series “Last Chance to See,” about extinction. It is also a nod to Mr. Douglas’s famous line that “the answer to life, the universe and everything” is 42 — which Dr. Turney said reminded him of the timing of the magnetic episode 42,000 years ago.

“It just seems uncanny,” he said, laughing. “How did he know?”

The interpretation is destined to create controversy. Some scientists who read the paper expressed admiration for the breathtaking linkages across disciplines.

“One of the strengths of the paper, just from the perspective of its scholarly work, not necessarily the analytical science that it does, is just the degree to which it stitches together all of these disparate sources of information to make its case,” said Jason E. Smerdon, a climate scientist at the Lamont-Doherty Earth Observatory of Columbia University in New York, who was not involved in the study. He called it a “tour de force.”

Likewise, James E.T. Channell, an emeritus professor of geophysics at the University of Florida, who was not involved in the study but was a peer reviewer, said that scholars had been stymied for half a century by the question of whether a waning magnetic field affects life. The paper opens up new avenues of research.

“If we knew enough about the timing of excursions, then perhaps we could relook at the problem,” he said.

But other scientists said the sweeping analysis left them wondering whether there were other explanations for some of the phenomena during the Laschamp excursion.

“It’s opening a can of worms rather than resolving a set of questions,” Dr. Skinner said.

Like several others interviewed, he worried whether the Adams Event nomenclature would lead to confusion in the scientific literature, and whether it was necessary. But he praised the paper for stimulating discussion.

“I’m certainly more excited about this topic today than I was yesterday,” he said.