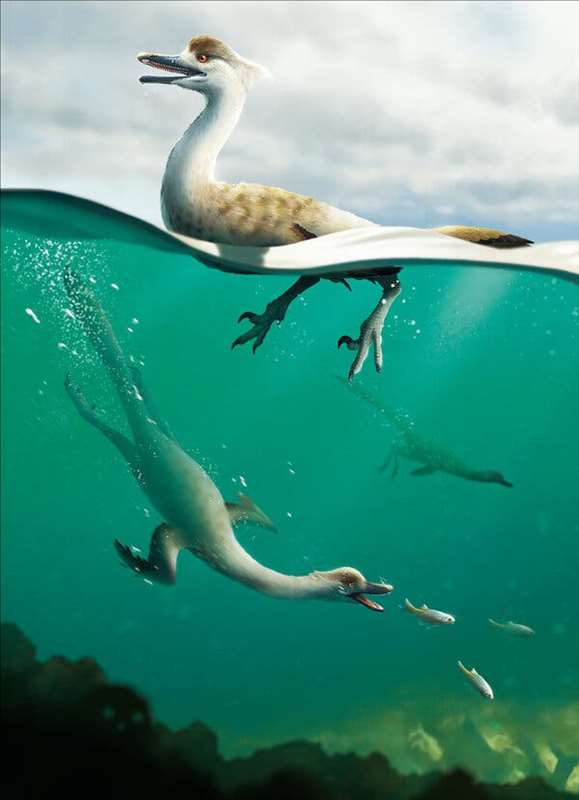 The duck-size animal’s body was streamlined for pursuing prey underwater, researchers say. Other paleontologists say more work is needed to confirm the finding.

Birds, the only group of dinosaurs still alive today, have evolved to make themselves at home in just about everywhere, from digging underground burrows to soaring above the oceans for thousands of miles without stopping. And then there are penguins, which plunge a quarter-mile deep into icy waters in search of food.

The new duck-size dinosaur was at first overlooked. In 2008, Robin Sissons, then a master’s student at the University of Alberta, was on a dig in Mongolia’s Gobi Desert when she noticed a “string of white bits poking out of the rock.” After she shared a photo of what she had seen with her colleagues over lunch, they went to the spot and ultimately transported the fossil to South Korea for further study. (The fossil has since been returned to the Mongolian Academy of Sciences.)

“After preparation in Korea, a whole skeleton came to light,” said Yuong-Nam Lee of Seoul National University, who led the expedition and is an author of the new study. “The specimen was so delicate but beautifully preserved. Instantly, we realized it was something important.”

The researchers found that the fossil had a mouth full of more than 100 tiny, sharp teeth and a long, slender neck. These features pointed to a dinosaur that spent time by the water, Dr. Lee said, with teeth, packed at the front of the snout, capable of hanging on to slippery, thrashing fish.

“Although the rib cage was not completely preserved, the rib orientation and shape clearly indicate that this animal had a streamlined body, as penguins do,” Dr. Lee said. This made the rib cage the smoking gun: Not only was this dinosaur feeding on fish, the researchers said, but it had a sleek body perfect for diving. The name they chose for it reflects this claim: Natovenator polydontus, “swimming hunter with many teeth.”

If the researchers are correct, Natovenator is among the first dinosaurs (besides birds) to dive for its dinner. But some other paleontologists are skeptical.

Lindsay Zanno, a paleontologist at the North Carolina Museum of Natural Sciences, said that she’s also keen to see further studies. “The time is right, now that we have several animals we think might be semiaquatic, to take a broader look at anatomical correlations with this lifestyle in living and extinct taxa,” she said.

Dr. Zanno noted that a potentially diving dino helps flesh out scientists’ understanding of how theropod dinosaurs, from Natovenator to T. rex to the pigeon outside your window, became so incredibly diverse, which is “the million-dollar question.” Answering it may involve overturning paleontology’s tendency to assume dinosaurs were landlubbers.

“Finding semiaquatic dinosaurs means that the ecological diversity was very high in dinosaurs, and it could change our prejudice about the lifestyle of dinosaurs,” Dr. Lee said. “More than 30 different lineages of tetrapods have independently invaded water ecosystems. Why not for dinosaurs?”