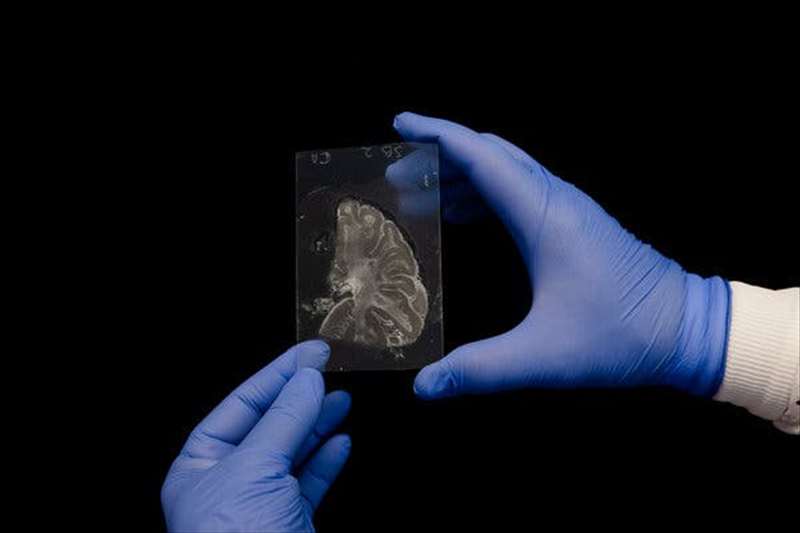 A 2019 scientific breakthrough and recent studies have given leading researchers optimism that C.T.E. could soon be detected in blood samples or via brain scans.

SHICKLEY, Neb. — Chris Eitzmann seemed to excel at everything until he didn’t.

He parlayed a Harvard football captaincy into an invite in 2000 to Patriots training camp. After bouncing around the N.F.L., Eitzmann retired from pro football in 2002, got an M.B.A. from Dartmouth and worked at several big financial firms in Boston, where he and his wife, Mikaela, had four children.

Chris had loved mountain biking, running and lifting weights, but he quit exercising and drank to excess. After a move to Mikaela’s family farm back in their home state of Nebraska two years later, Chris’s behavior became more alarming. He would disappear for long stretches of the day and neglect his work. His drinking got worse, and she said he would sometimes drive drunk.

In December 2021, Chris Eitzmann was found dead in his Boston apartment of alcohol poisoning at 44. Almost a year later, doctors at Boston University found that he had C.T.E., a disease that can still only be diagnosed posthumously. Mikaela said that knowing whether her husband had the disease while he was alive would have markedly changed the final years of his life.

“If he had known that it really was something, and not just this endless vacuum of not knowing, if he had an idea that he could have grabbed on to, that clarity and understanding would have been so valuable,” she said.

Without treatment options, a C.T.E. diagnosis could provide only clarity for former players such as Eitzmann who have reason to believe they may be affected. But it could eventually help current players make risk assessments about when to give up tackle football and help former players seek treatment.

Researchers are hoping that a series of recent breakthroughs will help speed up the development of a test for C.T.E. in the living.

Currently, the only way to accurately diagnose C.T.E. is to stain brain samples and examine them under microscopes to look for the presence of the specific tau proteins associated with C.T.E.

But if ongoing studies pan out, there could be a test for C.T.E. in the living in as few as two years, according to one leading researcher. The future of testing for C.T.E. hinges on developing ways of identifying the protein without requiring brain samples. So, scientists in multiple research institutes worldwide are working to identify biomarkers for the disease that can be seen in samples of blood, saliva or spinal fluid or by using brain imaging scans.

Additionally, Alzheimer’s diagnostics have advanced to the point at which blood tests are now on the market, and companies that have developed those tests are now looking to create a similar blood test for C.T.E.

As part of the wide-ranging project, doctors from the N.I.H. are tracking 120 former N.F.L. players, 60 former college players and 60 people with no history of repetitive head impacts to see if they show symptoms of C.T.E. Beginning in 2016, participants underwent a three-day examination that included neuropsychological and neurological assessments and were asked to detail their histories of brain trauma, lifestyle and other health factors such as genetics in a comprehensive look at their health.

The participants are now undergoing follow-up exams remotely to see if they demonstrate any C.T.E. symptoms or if those symptoms have progressed, and researchers hope that changes in their tests — which include spinal taps, blood analysis and neuroimaging scans — will help them identify biomarkers for C.T.E. The multidisciplinary group of 50 researchers from nearly a dozen institutions globally are already publishing some of the findings from the three-day exams.

“I now feel we are much closer to having fluid biomarkers, and in particular blood-based biomarkers, that will play an important role in diagnosing C.T.E. in life,” said Robert Stern of Boston University, the lead investigator for the project.

The long search to identify C.T.E. biomarkers reached a watershed moment in 2019, when a group identified that the tau proteins specific to C.T.E. were distinct from those in Alzheimer’s disease and other tau-based neurodegenerative diseases.

Researchers have been developing radio tracers for use in studies of football players and others with head trauma to see if those tracers bind to the tau protein associated with C.T.E. and inflammation in the brain.

“We are getting very close to advancing new radio tracers in humans to image the tau that is more prevalent in C.T.E.,” said Neil Vasdev, a radiochemist at the University of Toronto and the director of the CAMH Brain Health Imaging Centre, who is developing several promising radio tracers that focus on identifying the C.T.E. tau protein. “I like to think that we’re within two to five years, not 10 years” of developing a test for C.T.E. in the living.

Doctors leading C.T.E. research have for years said that a diagnostic test for the living was five to 10 years away. The expectation that the finish line is moving up marks a significant change in forecast for research that is complicated by a relatively small sample size of study participants and the need for long-range studies. But identifying tracers that can be seen on PET scans could lead to diagnosing C.T.E. before its symptoms are apparent.

“In principle, this should make it possible to seek to diagnose these deposits at an early stage,” Goedert said. “You have to be able to identify people who have some of these deposits in their brains before they have symptoms.”

Still, doctors like Gil Rabinovici at the University of California, San Francisco, have hit stumbling blocks to employing tracer technology. Rabinovici’s work examines how one tracer, MK-6240, attaches to C.T.E. tau in the brain of several dozen former N.F.L. players. The signal from those radio tracers thus far has been weak.

“It is quite difficult because you don’t know if they have C.T.E. in life, and if you use the scan, you can’t immediately say ‘aha’ and have a level of truth in the scan,” he said.

The good news, Rabinovici said, is that the tau proteins in Alzheimer’s and C.T.E. have more similarities than differences, so researchers can use some of the same techniques for tests.

“I don’t think we need to start from scratch,” he said. “That’s where I’m cautiously optimistic we’ll find a tracer that works.”