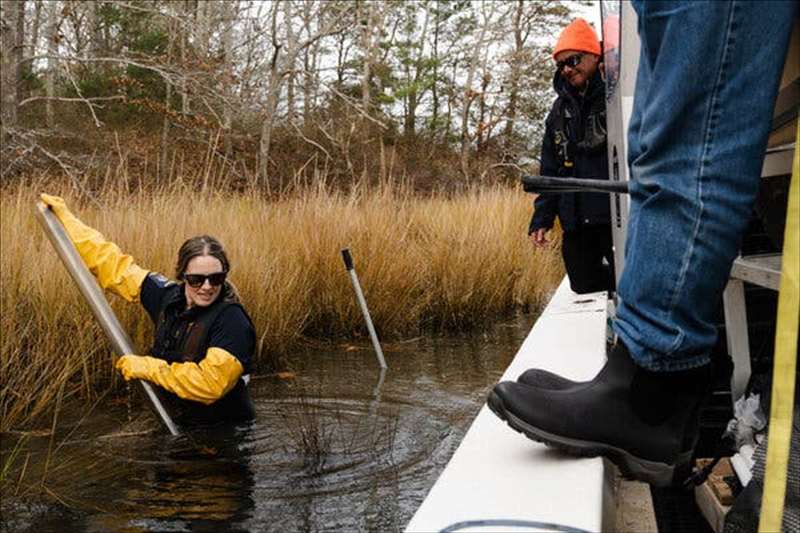 Climate change is contributing to electric-green algae blooms. Massachusetts wants a cleanup of the antiquated septic systems feeding the mess, but it could cost billions.

MASHPEE, Mass. — Ashley K. Fisher walked to the edge of the boat, pulled on a pair of thick black waders, and jumped into the river to search for the dead.

She soon found them: the encrusted remains of ribbed mussels, choked in gray-black goo that smelled like garbage and felt like mayonnaise. The muck on the bottom of the Mashpee River gets deeper every year, suffocating what grows there. It came up to Ms. Fisher’s waist. She struggled to free herself and climb back aboard.

“I did not think I was going to sink down that far,” said Ms. Fisher, Mashpee’s director of natural resources, laughing. Her officers once had to yank a stranded resident out of the gunk by tying him to a motorboat and opening the throttle.

The muck is what becomes of the poisonous algae that is taking over more of Cape Cod’s rivers and bays each summer.

The algal explosion is fueled by warming waters, combined with rising levels of nitrogen that come from the antiquated septic systems that most of the Cape still uses. A population boom over the past half-century has meant more human waste flushed into toilets, which finds its way into waterways.

More waste also means more phosphorus entering the Cape’s freshwater ponds, where it feeds cyanobacteria, a type of algae that can cause vomiting, diarrhea and liver damage, among other health effects. It can also kill pets.

The result: Expanding aquatic dead zones and shrinking shellfish harvests. The collapse of vegetation like eelgrass, a buffer against worsening storms. In the ponds, water too dangerous to touch. And a smell that Ms. Fisher characterizes, charitably, as “earthy.”

Together, the changes threaten the natural features that define Cape Cod and have made it a cherished destination for generations.

In response, and after several lawsuits filed by environmentalists, Massachusetts has proposed requiring Cape communities to fix the problem within 20 years, through a mix of upgrading the septic tanks used by homes that aren’t connected to city sewer systems, and by building new networks of public sewer lines.

Local officials say the plan would run into the billions of dollars and push housing costs beyond the means of many residents.

“It is physically, financially and logistically impossible for us to meet that standard,” Robert Whritenour, town administrator of Yarmouth, one of the largest towns on the Cape, told state officials during a December public hearing in Hyannis. “It’s simply unfair.”

Massachusetts must now decide whether to move ahead with the mandate, and risk driving some people from their homes, or weaken the proposed rule, and allow the waters of Cape Cod to degrade even further. The decision could be a model, or maybe just a warning, for other coastal communities facing similar predicaments as the climate warms and overwhelms infrastructure built for an earlier age.

“I can barely pay my mortgage,” Paul Haley, a Cape resident who said he lives on a fixed income, told state officials at the Hyannis meeting. “If I have to put in a new septic system, I have to leave.”

Mashpee has about 15,000 full-time residents, no main street, and no historical district. What it does have, in abundance, is waterfront.

The town is bounded by Waquoit Bay to the west, Popponesset Bay to the east and Nantucket Sound to the south, speckled by freshwater ponds and sliced by rivers, with marshland and cedar swamps throughout. Its name is derived from a Native phrase meaning “great water.”

The oysters that grow here are part of the tribe’s diet, heritage and revenue — the shellfish catch can bring in hundreds of thousands of dollars a year.

But the concentration of nitrogen in the Mashpee River can reach three times the maximum safe threshold established by state officials, according to readings from 2021.

And the average August water temperature in Popponesset Bay jumped from 68.2 degrees Fahrenheit in 2007 to 76.5 degrees this year. The main culprit is climate change, Ms. Fisher said. But she added that the rising muck has also created a feedback loop accelerating that change, because sunlight warms the river faster as it gets shallower.

So the algae have thrived. Their blooms suck up oxygen, suffocating the vegetation around them, and then decompose, layering the riverbed with gunk, killing oysters. The shellfish that survive are smaller, and the area where they can grow is shrinking.

The shellfish harvest “is a form of economic sustenance,” Mr. Oakley said. “It’s a way for us to connect to our culture.”

The ecological toll of the Cape’s reliance on septic systems is not limited to the shoreline. Cape Cod is dotted with freshwater kettle ponds that were formed by glaciers. One of Mashpee’s largest is Santuit Pond, roughly 170 acres of water surrounded by houses set on hills dotted with beech and scrub pine. In winter, the pond looks pristine, much the way it might have appeared to Henry David Thoreau when he walked the Cape in 1849.

For much of the rest of the year, it is a foul-odored, neurotoxin-laden, electric-green mess.

“Warning! Closed — no swimming. Swimming may cause illness!” reads a metal placard by the boat launch. A nearby sign helpfully instructs how to identify a toxic bloom of cyanobacteria, a type of algae, noting it “can look like foam, scum, mats, or paint on the surface of the water.”

Lest any would-be swimmers remain tempted to give it a go, the signage is insistent. “If you see a bloom, stay out of the water and keep your pets out of the water. Do not fish, swim, boat, or play in the water.”

Andrew McAdams lives on the shore of the pond with his two stepchildren, 13 and 11. He said he doesn’t have to tell them to avoid the water. They can see what it looks like, which is reminder enough.

The pond isn’t poisonous all the time, Mr. McAdams said. Only when it’s warm outside, which of course happens to be the time when his children would most like to use it.

The algae blooms in Santuit and other ponds are fueled by phosphorus, which, like nitrogen, is a component in human urine.

If towns like Mashpee installed a sewage system that would collect waste from homes and clean it at a treatment facility, the amount of phosphorus and nitrogen entering the ponds, estuaries and the bay would decrease, and the blooms would eventually fade.

It would be worth the cost, Mr. McAdams said. “You know how awesome it would be to take the kids out and go fishing?”

For local planners seeking a cheaper option than sewers, Brian Baumgaertel has a field full of human waste decomposing in tubs that might be of interest.

Mr. Baumgaertel is director of the Massachusetts Alternative Septic System Test Center, a county organization that does pretty much what its name suggests: He and his staff run sewage through a variety of contraptions, and see what comes out the other end.

A septic system is, in essence, a box in the ground, which holds whatever is flushed down a toilet. Solid waste settles at the bottom and is physically sucked out every few years. Liquid waste is sent into the ground, where gravity pulls it through the soil, removing harmful bacteria before it reaches the water table below.

Septic systems work well where homes are too sparse to justify expensive sewers and water treatment plants. About 95 percent of the Cape’s properties use them. But they don’t filter out nitrogen or phosphorus, which seeps into the groundwater and, eventually, bodies of water.

On a recent December afternoon, Mr. Baumgaertel removed the cover leading to an underground chamber. Inside, nitrate-heavy liquid waste flowed into a space filled with wood chips and bacteria. The carbon in the chips fuel the bacteria that turns the nitrogen into gas, a reaction manifested by small bubbles hissing on the surface of the subterranean goo. The nitrogen gas is released into the atmosphere.

Mr. Baumgaertel asked that the bubbling human waste not be photographed; he said the technology was proprietary.

Nitrogen-capturing septic systems like the one Mr. Baumgaertel was testing could be a solution for the Cape, a way to help repair the waters where development is not dense enough for sewer lines. The downside: They cost about $30,000, more than twice the cost of a basic septic system.

And the liquid released by advanced septic systems still contains five to eight milligrams of nitrogen per liter — too high to be the only solution for the Cape’s pollution problem.

The alternative is a sewer system and treatment plant, which would reduce the amount of nitrogen to three milligrams per liter or less, low enough that most of the bays could recover.

The catch is that a sewage system is even more expensive.

A few miles east of Mr. Baumgaertel’s field of septic innovation, a 55-ton excavator was lowering a concrete manhole into a freshly dug, 13-foot-deep trench, where it would be part of Mashpee’s first major public sewer project.

When completed after two years and at a cost of $64 million, the first phase of the sewer system will serve 439 single-family homes, about 5 percent of all households in Mashpee. The town’s plan is to eventually build sewers covering three-quarters of Mashpee, according to Ray Jack, the town’s wastewater project manager. He guesses it will cost as much as $450 million.

Mashpee officials had initially planned to spread that construction — and the expense — over 25 years. The new rule would force them to move faster.

“What they’re asking is, in my opinion anyway, an unreasonable timeline,” Mr. Jack said. “These costs are huge.”

It’s not yet clear who would pay the cost of the sewer installations and septic systems upgrades across the Cape necessary to meet the water standards proposed by the state. Some of the money could come from a tax on vacation rentals; federal and state money may cover some of the rest. But some of the cost is likely to come from residents, either by purchasing new septic systems or paying higher property taxes.

Christopher Kilian is a lawyer at the Conservation Law Foundation, a nonprofit that sued the state and Mashpee, arguing that Massachusetts law makes it illegal for towns to allow septic tanks that directly or indirectly release pollutants, including nitrogen, into surface water. The foundation agreed to pause its lawsuit if the state finalized the new rule by the middle of January.

Mr. Kilian said arguments about the high cost of cleaning the water are designed to justify inaction, and the priority should be fixing the problem.

But for all its glittering wealth along the shore, median household income on the Cape is $82,619 — lower than the state average. Almost one-third of the population is 65 or older.

The Nature Conservancy, an environmental group that has been working with Cape officials to address water problems, said the solution needs to be affordable, or it won’t be replicable elsewhere.

“We do need to be really, really careful that we’re not just making the Cape a place where incredibly wealthy people can go and enjoy their clean water,” said Emma Gildesgame, a climate adaptation scientist with the group. “It’s a really hard question.”