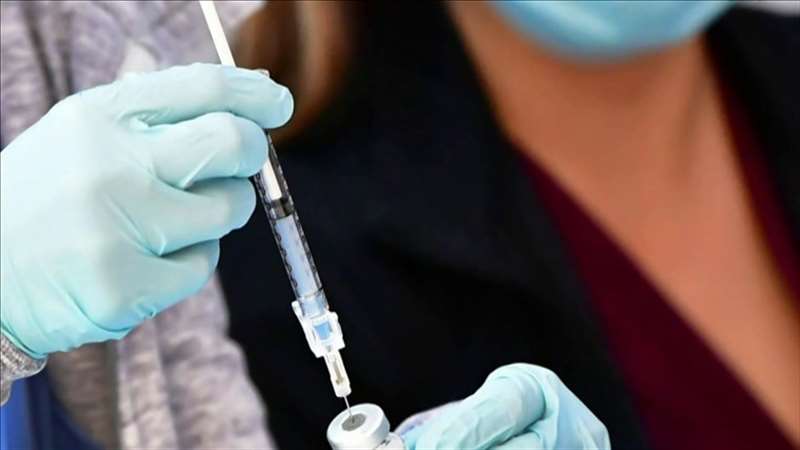 Little Juliette Berkhemer is a just few months away from finding out the truth about her grandparents — they don’t actually live in her mother’s cellphone.

For almost as long as Juliette has been alive, her only contact with her grandma and grandpa in Houston has been in FaceTime chats, said her mother, Becca Hoffman.

“She gets so excited when they call,” Hoffman said. “She wants to get on the phone and jabber away. She was just a few months old when my parents saw her, and then the pandemic happened. So this is how Juliette knows them, just from the phone.”

Excited grandmother Renee Hoffman said Juliette was just a newborn when she saw her — and her grandson, Vincent, now 7 — back in January 2020.

“I thought I would be seeing them again soon, and then Covid hit,” said Hoffman, 60.

Now, the Hoffmans are conspiring to fly back to New Jersey as soon as possible.

“Vincent already knows that we’re hoping to come, but Juliette doesn’t,” Renee Hoffman said. “She’s going to be so surprised. She thinks we live in FaceTime on the phone.”

There are legions of older Americans like the Hoffmans who, fearful of contracting Covid-19, were forced for over a year to go without hugs, without kisses, from their sons and daughters and grandchildren.

The CDC acknowledged the pain in its first federal public health guidance about how people who have gotten both doses of the Pfizer or Moderna vaccines or the single-dose Johnson & Johnson vaccine can return to some semblance of normal life.

“For example,” the CDC wrote, “fully vaccinated grandparents can visit indoors with their unvaccinated healthy daughter and her healthy children without wearing masks or physical distancing, provided none of the unvaccinated family members are at risk of severe COVID-19.”

Those were words Renee Hoffman feared she would never hear.

Becca Hoffman said she was feeling very stressed out when her parents visited in January 2020, in the dead of winter.

“I felt like I didn’t enjoy it enough,” she said. “But I figured that in a couple months or so we’d see them again soon.”

Renee Hoffman said that when the pandemic hit, she and her husband, Ted, had been spending a lot of time with their other grandson, Aiden, who is now 6 and lives with his parents about an hour away in Conroe, Texas.

Renee Hoffman said that she and her husband decided early on to listen to the medical experts instead of the governor and that they have been diligent about wearing masks.

“I have to say I started wearing a mask right away, and I’ve not been sick one time,” she said. “Same goes for my husband. He has heart disease and needs a pacemaker, but that’s been put off because his doctor says it’s not safe for him to be in a hospital yet.”

Still, Renee Hoffman said, they felt like exceptions to the rule, and they watched in dismay as many people around them were lax about wearing masks and seemed uninterested in social distancing. Other families, she said, were getting together despite the CDC’s admonitions, and she acknowledged that that tested their resolve.

“The waiting and not being able to see my kids, to see my grandchildren, was starting to get to me,” she said. “It was getting to the point where I was thinking I don’t care if I get sick. I’ve got to see my kids.”

So the Hoffmans were ecstatic when the country got word in December that the Covid-19 vaccines were on the way.

“Last Friday, we got our first dose of Moderna, and we are getting our second dose on April 2nd,” Renee Hoffman said. “Our goal is to see Aiden by my husband’s birthday in June.”

And then, at some point, it will be off to New Jersey to see Vincent and Juliette, she said.

“Oh my God, we’re so excited and so very thankful, thankful that the vaccines are available,” she said.

Her voice cracking with emotion, she said that she has been running reunion scenarios with her kids and grandkids through her mind for months and that now that they suddenly seem possible, she can feel the excitement building.

In Jersey City, Becca Hoffman said she, too, is excited about being reunited with her parents. But the day-to-day reality of living in a cramped apartment with her husband and two kids has her perusing real estate listings in the New Jersey suburbs, and having to home-school her son doesn’t give her much opportunity to let her imagination roam.

And right now, she doesn’t dare fly anywhere with Juliette — and not just because of the Covid-19 threat. “She’s a spicy little girl,” Becca Hoffman said with a chuckle.

So in her mind, she said, it is summer when her parents come back in Jersey City.

“I have this vision of us hanging out across the river in Central Park, ” she said. “I would love to have them here.”