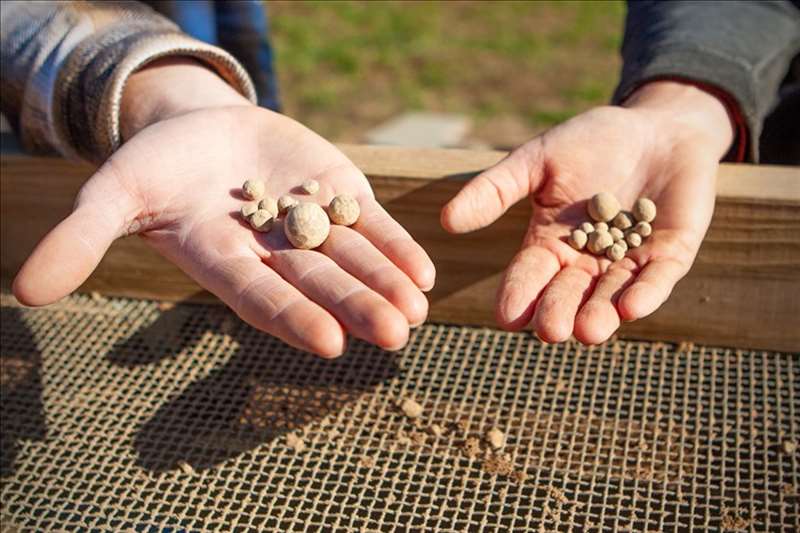 Buried underground in the middle of an open field, roughly a half-mile inland from St. Mary’s River, archaeologists have discovered the remains of Maryland’s earliest colonial site, a 387-year-old fort that was erected by European settlers in 1634.

“There are a lot of cross-colonial and cross-cultural things that we can learn,” Parno said. “Not just how we compare to other places, but how the colony expanded and those really complicated social and political relationships between Native populations and the colonists, and also between different groups of Native peoples.”

Parno said early excavations have indicated the site is well preserved. The fort was constructed of wood, which means that unlike with stone, brick and other types of masonry that can be uncovered, archaeologists instead have to look for clues in what remains in the soil.

“It’s kind of a mixture of art and science because you have to excavate and look at stains in the soil left behind by wood that was there in the past,” Parno said.

In March 1634, roughly 150 colonists sailed aboard two ships, Ark and Dove, to settle at St. Mary’s Fort. The site was active for more than 50 years, but it was later abandoned after the state capital migrated to Annapolis.

What’s currently known about St. Mary’s Fort has been mostly pieced together from historical records and correspondence in 1634 between the colony’s first governor, Leonard Calvert, and the man in England who helped finance the settlement, Richard Lechford.

In fact, it was Calvert’s own letters that caused some confusion during the search for St. Mary’s Fort. In one of Calvert’s dispatches, he described the fort as measuring 120 yards square with four bastions for protection.

But when archaeologists searched the field using ground-penetrating radar, they found the outlines of a structure that vaguely resembled what Calvert described — but not quite.

“We found a large, palisaded enclosure, but it wasn’t square,” Parno said. “It was rectangular and about 104 yards by 58 yards, so about 44 percent of the size of what Calvert described in his letter.”

Parno’s team also found only one circular bastion on one corner, rather than four. In 2019, a portion of the site was excavated and archaeologists sampled the remains. They found artifacts dating back to the early 17th century, which helped them confirm that they had indeed stumbled on the site of St. Mary’s Fort.

“At that point, we knew it wasn’t a later construction,” Parno said. “It was the palisaded enclosure we were looking for.”

Archaeologists are expecting to learn more about St. Mary’s Fort as larger sections of the site are excavated. Beyond the area’s rich colonial history, Parno said researchers are keen to understand how the land was used for thousands of years before European settlers landed on Maryland’s shores.

“The colony was in place for essentially 60 years, but for more than 10,000 years, people lived in or moved through this part of southern Maryland,” he said. “Why not expand and treat this whole field as a laboratory to investigate human experience in this part of the world over the course of thousands of years?”