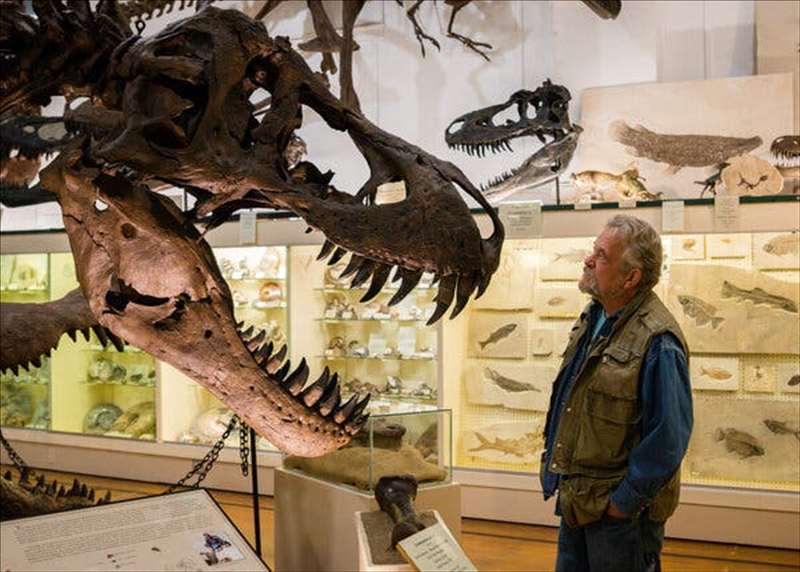 Fossils are a multimillion-dollar business, bringing legal disputes, nondisclosure agreements and trademarks to the world of paleontology.

HULETT, Wyo. — Crouching over a snow-dusted quarry that moonlights as a fossil hunting ground, Peter Larson pointed to a weathered four-inch slab peeking out from a blanket of white. A commonplace rock to the untrained eye, but an obvious dinosaur bone to Larson.

“That’s 145 million years old, plus or minus,” said Larson, a 70-year-old fossil expert and dealer, as he walked through an excavation site that had already yielded seven dinosaurs.

Among them were Elaine and Leslie Waugh, who raised sheep on their Wyoming property, not far from the Devils Tower National Monument, but who began to wonder what they should do about all the dinosaur fossils they kept finding in the dirt.

Fossil hunting has become a multimillion-dollar business, much to the chagrin of academic paleontologists who worry that specimens of scientific interest are being sold off to the highest bidders.

Larson, who seems to be involved in most dinosaur-world dramas these days, was examining a photograph of Shen when he realized that it seemed familiar: Its skull looked a lot like Stan’s. “The scars on Stan’s face are still there, the teeth are in the same position,” Larson said.

Larson’s company, the Black Hills Institute of Geological Research, retains intellectual property rights to Stan, selling polyurethane casts of the specimen for $120,000 each. After a lawyer for the Black Hills Institute raised the issue in emails and phone calls, Christie’s clarified its online marketing materials to note that Shen had been supplemented with replicas of Stan’s bones. On Sunday, Christie’s withdrew Shen from the sale altogether, saying it would “benefit from further study.”

Larson is either a famed fossil expert or an infamous one, depending on how one feels about the booming market for bones. He has been a central character in the introduction of dinosaurs to the auction market, and his nearly 50-year career has been marked by court battles over bones, an 18-month stint in federal prison after he was convicted of customs violations involving fossil deals abroad, a messy legal fight with his brother over their fossil company, and now a spat with an auction house over a high-profile sale.

Things were simpler at the beginning of his career, Larson said, when universities, museums and a smaller group of private collectors were the only ones who cared about buying pieces of natural history.

It was not until 1997, with the sale of Sue, that dinosaurs started to be viewed as potential centerpieces of auctions.

But for Larson, putting Sue on the auction block was not part of the plan.

Driving his pickup truck back from the fossil quarry in Wyoming, Larson recalled losing Sue.

The trouble had started in 1992, when Larson stepped out of the shower to find his fossil business in Hill City, S.D., blocked off with yellow tape and swarmed by F.B.I. agents. They had a search warrant demanding that the institute surrender Sue, known as the largest T. rex specimen ever found at the time.

The skeleton had been discovered two years earlier by Sue Hendrickson, then a volunteer excavator, who had stumbled upon bones sticking out from a cliffside on the Cheyenne River Reservation. As the Black Hills team — including Larson and his brother Neal Larson — finished the excavation of Sue, it gave the landowner, Maurice Williams, a check for $5,000.

But the U.S. government contended that Sue was, in fact, its property because the land where Sue was found was held in trust by the government. Williams also asserted that there had never been any deal for the fossil company to buy Sue: He disputed that the $5,000 was for the fossil, saying he had thought it was for access to the land.

Larson’s company sued the government to get Sue back, but after an appeals court ruled against the institute, Williams was ultimately allowed to put the skeleton up for auction in a sale brokered by Sotheby’s, which advertised it as a “highly important and virtually complete fossil skeleton.” The winning bidder was the Field Museum of Natural History in Chicago, which had financial backing from Disney and McDonald’s. The sale changed the field.

“People, especially wealthy people, realized, ‘Hey, I can buy one of these!’” said George Winters, the administrative director of a trade group Larson helped start that represents fossil dealers.

“I call them the dinosaur dreamers,” Larson said. “The people who had the idea that all you had to do is drive up to an outcrop, tie a log chain on a dinosaur’s tail, drag it out of the ground and sell it for millions.”

If Larson had his way, Stan, the company’s next big find after Sue, would have stayed on display forever at the company’s museum in Hill City, a former gold mining settlement near Mount Rushmore that bustles each summer with tourists and bikers drawn to the area for the annual Sturgis Motorcycle Rally.

Stan was discovered by an amateur paleontologist named Stan Sacrison. In 1992 the Black Hills Institute began the excavation, using a jackhammer, picks and shovels to dig it out of a butte in northwestern South Dakota. The next year, as the company continued work on the skeleton, the movie “Jurassic Park” opened in theaters, fueling popular interest in dinosaurs.

After the Black Hills Institute lost Sue, Stan became the pride of the company. The fossil toured Japan like a rock star. Casts of the skeleton were purchased by museums around the world. And because the specimen had so many original bones — 190 — Stan was ripe for scientific study.

But as with Sue, the sale of Stan was the resolution of a long legal battle.

In 2015 Neal Larson filed a lawsuit against his brother Peter and other leaders at the Black Hills Institute, claiming that he had been unlawfully fired from the company’s board. A judge sided with him. Peter Larson said the company’s lawyer at the time had the idea to offer Stan to Neal Larson to buy out his share of the company. At the time, no one realized just how valuable the fossil would prove.

“It was a shock that a fossil could go for that much money,” said Steve Brusatte, a paleontologist at the University of Edinburgh.

Many scientists are aghast at the growing commercial market, and increasingly anxious that scientifically important specimens will disappear into private mansions. Paleontologists are also concerned that the market could encourage illegal digging, and that American landowners — who, by law, generally own the fossils found on their land — would favor commercial fossil hunters over academic researchers.

“Ranchers who used to let you go and collect specimens are now wondering why they should let you have it for free,” said Jingmai O’Connor, a Field Museum paleontologist, “when a commercial collector would dig up the bones and split the profit.”

Fossil diggers and dealers in the commercial sphere counter that if not for them, these specimens on private land would be left to erode further, never to be found.

The United States is an outlier legally. Other dinosaur-rich nations, including Mongolia and Canada, have laws making fossils the property of the government. Thomas Carr, a paleontologist at Carthage College in Wisconsin, said he believed that the lack of protections for “natural heritage” puts scientists in the United States at a disadvantage.

Larson — who does not have an advanced degree, saying that he had started working on a doctorate in paleontology before withdrawing because of mounting legal bills and the lingering effects of the Great Recession — sees it as a good thing that the broader public is assigning this kind of value to fossils, which he has loved since he was 4 years old.

Unlike his brother, Peter Larson did not profit from the auction of Stan, but he does a brisk business in selling replicas of the fossil — the company retains its intellectual property rights, often sticking a “TM” at the top corner of the name Stan to note it is trademarked. And he recently finalized a deal that suggests the current bone bonanza extends beyond high-profile auctions: He has sold the Camarasaurus, Barosaurus and Brachiosaurus that his team unearthed on the Waugh land to a museum abroad. (Like many of his peers in the often secretive commercial fossil world, Larson signed a nondisclosure agreement barring him from sharing the buyer or price.)

“This is the first time when I’m not worried about paying the bills,” Larson said.

Christie’s said in its marketing materials that Shen was “54 percent represented by bone density,” a measure that some fossil experts questioned. Shen has about 79 original bones, the auction house noted. While the precise bone count for a T. rex is not known with certainty, and can vary depending on methodology, some scientists have estimated that a complete skeleton would contain 300 bones, and others 380.

Shen’s resemblance to Stan drew notice from experts in the field.

After Luke Santangelo, a lawyer for the Black Hills Institute, pressed Christie’s to be transparent in its marketing materials about just how much of Shen was a replica of Stan, the auction house added a note to its website: “Replica bones that were added to original bones (referred to as STAN™ elements) were created by, and purchased from, Black Hills Institute of Geological Research, Inc.”

It is common for T. rex fossils to be incomplete, and to be supplemented with casts. But the standards for measuring completeness — and disclosing it — tend to vary widely. Should it be by the number of bones? The size of the bones? How should fragments count?

The notion of completeness has taken on new importance as more people are trying to sell dinosaur fossils for prices that can hit eight figures.

At Larson’s preparatory lab in Hill City, the staff is cataloging the bones of the three long-necked dinosaurs that were found buried in the Waugh quarry and sold to a museum abroad.

Bones of the Camarasaurus, Barosaurus and Brachiosaurus were stocked on shelves and laid out on tables, waiting to be made display-ready: a scapula the size of the hood of a car, a nearly five-foot-long femur, a tail vertebra that felt as heavy as a bowling ball.

As part of its three-year project, the team has been peeling back the foil and plaster that encased the bones and blowing off the remaining dust and rock with targeted blasts of baking soda. The workers are gluing the broken pieces together like a massive prehistoric puzzle, filling cracks in the bones with epoxy resin.

“It takes thousands of hours to build a dinosaur,” Larson said.

Eventually the bones will be packed into crates, stabilized with the same kind of foam used to protect famous paintings, trucked out of South Dakota and put on a plane.