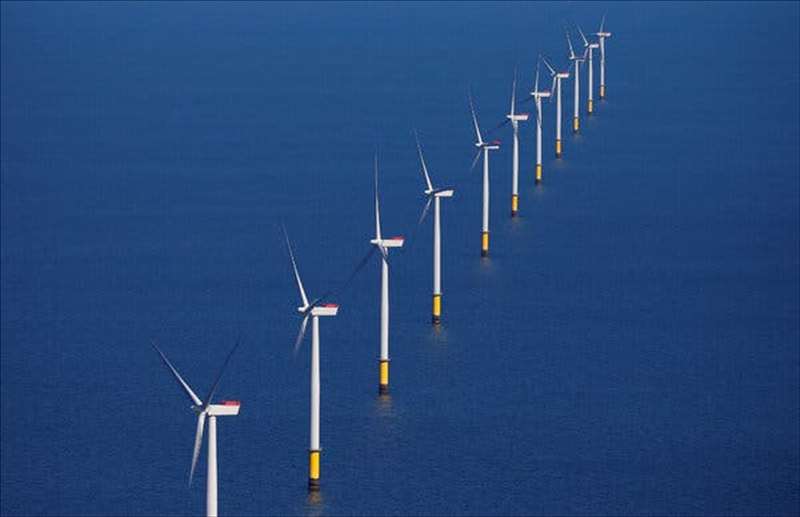 The plan sets a goal of deploying 30,000 megawatts of offshore wind turbines in coastal waters nationwide by 2030, enough to power 10 million homes. To help meet that target, the administration said it would accelerate permitting of projects off the Atlantic Coast and prepare to open up waters near New York and New Jersey for development. The administration also plans to offer $3 billion in federal loan guarantees for offshore wind projects and invest in upgrading the nation’s ports to support wind construction.

“We have an enormous opportunity in front of us to not only address the threats of climate change, but use it as a chance to create millions of good-paying, union jobs,” said Gina McCarthy, the White House national climate adviser.

As part of the announcement, the administration designated an area of shallow water between Long Island and the New Jersey coast as a priority offshore wind area, a first step before issuing new leases to wind developers. New York and New Jersey have committed to procuring a combined 16,500 megawatts of new offshore wind power by 2035 to help meet their targets for cutting global warming emissions.

Vineyard Wind is one of 13 offshore wind projects along the East Coast under some form of federal review, and the Interior Department has estimated that as many as 2,000 turbines could be rotating in the Atlantic Ocean by 2030. The White House on Monday said the offshore wind plan would avoid 78 million metric tons of carbon dioxide emissions.

Republicans said they were skeptical of Mr. Biden’s promise of “green jobs.” They have criticized his earlier moves to suspend new oil and gas leases and revoke permits for the Keystone XL pipeline, claiming those moves were responsible for killing jobs in their states.

“Here we go again with the promise of ‘green jobs,’” said Thomas J. Pyle, the president of the Institute for Energy Research, an organization that supports the use of fossil fuels. “If the government wants to create jobs, they would do it faster and more efficiently if they just got out of the energy business altogether.”

These Eastern states have set aggressive goals to get more electricity from renewable sources such as wind and solar to help address climate change. But they don’t get nearly as much sunshine as states like California, and it’s often difficult to find space for wind turbines onshore. That makes offshore wind attractive: While the technology is still more expensive, costs have been falling in Europe. And offshore winds along the East Coast are strongest in the afternoon and evening, when electricity demand is at its highest.

“There’s almost no way these Eastern states can meet their climate goals without a lot of offshore wind,” said Rafael McDonald, an electricity and renewable analyst at IHS Markit, a financial services company. “That’s a big reason we’re seeing this surge of interest.”

Monday’s announcement will allow auctions to be held for developers to bid on the right to apply for federal permits to construct wind projects in the area between New Jersey and Long Island. The Bureau of Ocean Energy Management will publish a proposed sale notice and, after a formal comment period, will plan on lease sales in late 2021 or early 2022, the White House said.

Separately, the ocean management bureau said it would prepare an environmental review of a 1,100 megawatt offshore wind farm proposed to be developed about 15 miles off the coast of Atlantic City, N.J., which has a goal of developing 7,500 megawatts of offshore wind energy by 2035.

Much of the Biden plan involves harnessing the federal government to help states meet existing targets like those of New York and New Jersey. The Transportation Department, for example, announced $230 million funding for port authorities for the construction of storage areas and other projects to support wind development.

The biggest pot of money, $3 billion, is being made available through the Department of Energy’s loan program to partner with offshore wind and transmission developers.

Although the newest offshore wind proposals are typically positioned far enough away from the coastline to allay fears of spoiled views, they have still garnered opposition from commercial fishermen operating in the region. Federal waters in the Atlantic are home to a variety of economically important fisheries, including sea scallops, squid and surf clams, many of which overlap with areas of future offshore wind development.

“Our fisheries are already more strictly regulated than anywhere else in the world, so it’s not just as simple as saying fishermen can just change their gear and go fish somewhere else,” said Annie Hawkins, executive director of the Responsible Offshore Development Alliance, which represents commercial fishing. “Fishermen understand the need to act on climate change, but they don’t want to be left completely behind.”

As part of the Vineyard Wind project, Massachusetts agreed to set aside $21 million to compensate fishermen for losses, though it remains unclear how the money will be spent. In its announcement Monday, the Biden administration announced $1 million in new grants to study the effects on fishing and coastal communities. Ms. Hawkins said, however, that the sum was “paltry” compared to the scale of development planned for the Atlantic.

Marine scientists also said that there were many unanswered questions about how a boom in offshore wind construction might affect ocean ecosystems in the Atlantic Ocean that are already under stress from global warming.

“The fact is, it’s a big experiment,” said Kevin Stokesbury, a professor at the School for Marine Science and Technology at the University of Massachusetts at Dartmouth. “There’s only so much we can learn from Europe’s experience. We just haven’t had these big wind turbines all over our coast.”