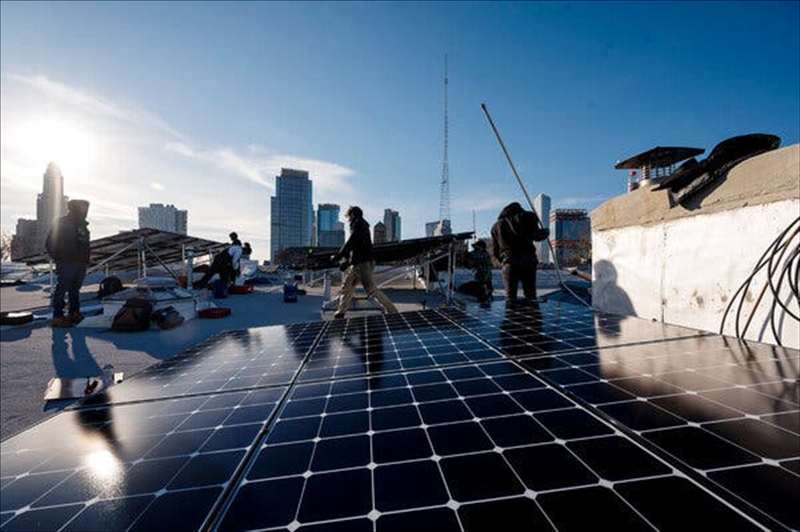 On Wednesday, President Biden traveled to Pittsburgh to try to make the opposite case: that the workers Mr. Trump was appealing to have more to gain from combating climate change than to lose.

“I am a union guy. I support unions, unions built the middle class. It is about time you start to get a piece of the action,” Mr. Biden said in Pittsburgh.

That is not a new pitch. For decades, Democrats have insisted “jobs versus the environment” is a false choice. But in the scale of his proposal and the audacity of his promises, Mr. Biden may be laying his political future on that idea.

In Michigan, a state critical to the president’s political future, autoworkers know it takes fewer of them to build an electric car. Senator Joe Manchin III, the West Virginia Democrat whose vote could again decide the package’s fate, understands coal miners in his state would earn considerably less putting up wind turbines.

And in Pennsylvania, which put Mr. Biden over the top in November, and then hosted his speech on Wednesday, some union workers don’t see how skills honed over decades in fossil fuel industries would translate in a clean-energy future.

“They keep saying, ‘We’re going to transition you into solar jobs.’ That’s not how it works,” said Shawn Steffee, a leader of the Boilermakers Local 154 in Pittsburgh. “We build power plants, petrochemical plants and maintain steel mills.”

He asked, “Would you ask Tom Brady to play middle linebacker just because he’s a football player?”

Union leaders — some of whom switched from supporting Mr. Trump in 2016 to Mr. Biden in 2020 — say that for now, they will work with him to realize his vision of conquering climate change, even as it transforms their workplaces.

But they are skeptical that the well-paying union jobs the president promises will materialize, noting that, so far, the ecosystem of manufacturers, contractors and utility developers that has grown up around the green economy has often been low-paying and hostile to unions.

“The president’s new mantra is ‘Build Back Better’ with good union jobs that have good wages, and not just wages but representation,” said Joe Davis, the state political coordinator for the International Brotherhood of Electrical Workers in Michigan. “But these companies seem to be resistant to that.”

And Republicans are ready to try to win back the union votes that Mr. Trump won, then lost. “Rather than picking winners and losers with pie-the-sky Green New Deal mandates, we should be embracing an all-the-above energy strategy,” Representative Cathy McMorris Rodgers, Republican of Washington, said Wednesday.

No industry may have more to gain — or lose — from Mr. Biden’s climate plan than America’s automakers, which currently employ about a million workers. The president’s infrastructure plan proposes $174 billion to encourage the manufacture and purchase of electric cars, which today make up just 2 percent of the vehicles on America’s highways.

He envisions a not-too-distant future in which nearly half of the middle class drives affordable union-made cars, trucks and sport utility vehicles that produce zero fossil-fuel pollution, powered by millions of electric vehicle charging stations, all jump-started by his stimulus spending.

From a climate perspective, the plan makes sense. Fossil fuel emissions from vehicle tailpipes are the leading cause of planet-warming pollution in United States. Replacing gas-guzzlers on the road with electric vehicles could be one of the most effective ways to lower the nation’s emissions.

From a job-creation perspective, it’s more complicated. On the one hand, it takes about one-third fewer workers to build an electric car than a car with an internal combustion engine. On the other, the plan could make Detroit more competitive and increase its share of the global automobile market.

Mr. Biden’s proposed solution is to lure the electric-battery industry, and its supply chain, to the United States from China and elsewhere in Asia, with a mix of manufacturing tax credits and other incentives. If it works, the next two years would see new electric vehicle battery and assembly plants sprouting up across the country. If it fails, Mr. Biden could face harsh political repercussions.

“We can make it work, but we have to be intentional about policy to bring the battery supply chain back to the U.S.,” said Representative Debbie Dingell, a Democrat whose Detroit-area district is home to some of the nation’s largest auto plants. She added, “If they’re in China and Asia, this isn’t going to be OK.”

Some industry analysts say as Americans buy more electric vehicles, battery manufacturers will build plants in the United States. That would make it easier to integrate the batteries into cars and helps save on transportation costs.

Mr. Biden’s energy plan would also dedicate $100 billion to update and modernize the electricity grid to make it more reliable and better able to route power from wind and solar plants to large cities. Mr. Biden would also extend tax credits that subsidize investments in wind and solar energy.

Accelerating the shift to wind and solar power is likely to create tens of thousands of construction jobs, economists and industry officials say. But those jobs typically pay far less than those in the fossil fuel industry.

Anthony Prisco, the head of the renewable energy practice for the staffing firm Aerotek, said a standard solar project would employ about 250 workers for just under a year. About one-third of the workers make $30 an hour or more; the other two-thirds have fewer skills and make hourly wages of less than $20.

By contrast, the construction of a gas-powered electricity plant typically lasts two to three years and employs hundreds of skilled, unionized tradesmen — electricians, pipe-fitters and boilermakers — who make $75,000 a year or more, including benefits.

“When you’re talking about the transition to the new green economy, the first question has got to be how are people going to make a horizontal economic move,” said Sean McGarvey, the president of North America’s Building Trades Unions, in an interview last month. “I can tell you that in the onshore wind and solar industry, for my members we’re talking in some cases a 75 percent pay cut and they’re losing benefits.”

Jim Harrison, the director of renewable energy for the Utility Workers Union of America, said that it typically takes hundreds of workers to operate and maintain a nuclear or coal plant, several dozen at a gas plant — and about a dozen at a wind farm. Solar fields can often operate without a single worker on-site.

Mr. Biden has acknowledged that his plans could leave around 130,000 oil, gas and coal workers without their livelihoods. He included a $16 billion program to help fossil fuel workers transition to new work like capping leaks on defunct oil wells and shutting down retired coal mines.

The fossil fuel industry, while generally supportive of capping abandoned wells, contends that Mr. Biden is overstating the job opportunities.

In Pittsburgh, a former steel town that has transformed into a hub for high tech and medicine, leaders have made clear they support clean energy development. But in other parts of Western Pennsylvania, union workers closely tied to fossil fuel industries had reservations.

“I don’t see solar or wind creating as many jobs as we get from petrochemical plants, cryogenic plants or coal-fired power plants,” said Kenneth Broadbent, business manager of the Steamfitters Local 449 in Pittsburgh, who endorsed President Biden.

“There’s no stopping electric cars,” Mr. Broadbent said. But, he added, “You’re not going to see natural gas and coal and nuclear be phased out as quickly as people would like.”