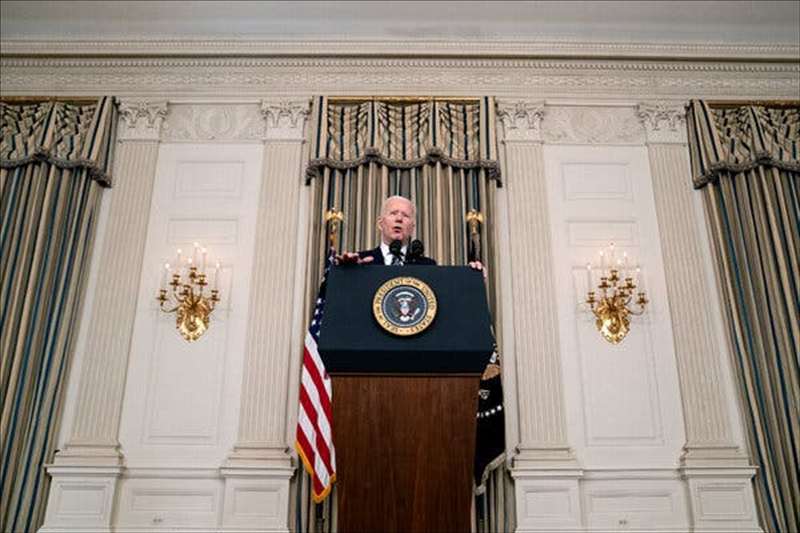 The president’s plan, worth up to $4 trillion, represents a fundamental shift in the way Democrats talk about tackling climate change: It’s no longer a side issue.

WASHINGTON — President Biden’s next big thing would fuse the rebuilding of America’s creaky infrastructure with record spending to fight climate change, a combination that, in scale and scope, represents a huge political shift, even for Democrats who have been in the climate trenches for decades.

A guiding philosophy of the Biden proposal argues that the future of good jobs is the transition to an economy that no longer churns out carbon dioxide through the burning of coal, oil and gas.

But as currently constructed, accelerating a clean energy transformation underpins nearly every part of the plan, people familiar with it said. It includes building electric power lines that can deliver more renewable energy, building electric vehicle charging stations, capping oil and gas wells to reduce emissions and reclaiming abandoned coal mines. There is money to build a million new affordable, energy-efficient housing units and to make existing structures more energy efficient. Hundreds of billions of dollars would go toward “high-growth industries of the future,” such as advanced battery manufacturing.

The underlying message — that the next step of America’s economic recovery is fundamentally tied to countering the climate crisis — represents a major pivot in the way Democrats make the case for tackling global warming. No longer merely an environmental imperative like saving the polar bears, or a side element of a stimulus package like it was under the Obama administration, climate change has become the centerpiece.

Administration officials say they view averting catastrophic warming and pursuing American dominance of the emerging global industries as inseparable. That is a sharp break from even the most recent Democratic administration, when Mr. Biden was vice president, let alone the Trump era, when the president denied the existence of climate change.

“Thinking about addressing climate change through infrastructure is in itself not a revolutionary idea, but if you said to most people, ‘Is America’s infrastructure in trouble?’ I think the first words they would mention to you are bridges and roads, not E.V. charging stations,” said Robert N. Stavins, an environmental economist at Harvard University.

White House officials would not put a dollar figure on the amount dedicated to climate change, but one person familiar with the talks said climate and clean energy spending could exceed $2 trillion.

Some climate activists say the plan suffers from a lopsided approach that would increase the supply of clean-energy projects and products while doing little to spur demand by forcing reductions in fossil fuel consumption.

Senator John Barrasso, Republican of Wyoming, said in a statement that Mr. Biden should focus on working with Republicans “to fix America’s crumbling roads and bridges,” rather than “raise taxes while also spending trillions on a bill that includes the punishing regulations of the Green New Deal.”

But Mr. Biden is not straying from his recent positions. He promised during his campaign to “build a more resilient, sustainable economy” that puts the United States on a path to achieve net-zero emissions by midcentury, while creating “millions of good paying jobs.” He has continued to hit the theme since his inauguration.

“One of the big goals we had when we introduced the Green New Deal was to shift climate change from being a billion dollar problem to a trillion dollar opportunity,” Ms. Ocasio-Cortez said in an interview.

“The fact that climate and infrastructure is seen as part of the same endeavor is, I think, highly reflective of that shift,” she said.

So far, the package excludes the one thing that economists agree is the most efficient way to draw down planet-warming emissions: taxing or otherwise putting a price on the carbon dioxide emissions that cause it. Instead of a gasoline tax, for instance, the president plans to greatly raise fuel efficiency standards for cars, forcing automakers toward electric vehicles through regulation, not legislation. Similarly, Mr. Biden plans to reimpose strict emissions regulations on electric power plants to move the sector away from coal.

“Biden never made a carbon tax the center of his proposal,” said John Podesta, a former adviser to President Barack Obama on climate change. “I think he believed that the combination of investments and standards with a focus on equity was a winning formula both for the economy and was more politically viable.”

Others, though, said they worried that Mr. Biden’s strategy — long-term projects and regulation that could take years to finalize — was too lengthy, too pricey and too uncertain to cut enough emissions.

“The scale of the climate problem demands the most economically efficient response, and because it’s politically difficult to talk about pricing carbon we’re drifting toward a really expensive way of addressing climate,” said Alex Flint, executive director of the Alliance for Market Solutions, a conservative nonprofit group that supports a carbon tax.

“A carbon tax at least has to be part of the discussion,” Mr. Flint added.

Mr. Stavins of Harvard University cautioned that using government spending to achieve both job creation and climate change, while popular, isn’t always compatible. Quick boosts to the economy rely on so-called “shovel-ready” projects — and those aren’t necessarily the ones that will lead to deep decarbonization.

But, he conceded, if Mr. Obama could not secure legislation to cap carbon emissions when he had 59 Democrats in the Senate, Mr. Biden cannot win a similarly tough plan with 50 Democrats, one of whom, Senator Joe Manchin III, represents the coal state of West Virginia.

Jamal Raad, who co-founded the climate advocacy group Evergreen Action, said both the politics of climate change and the market for clean energy have changed dramatically over the past decade.

“There’s been a whole lot of work telling a broader story about what climate change means and what the transition to clean energy would mean for our economy and jobs,” he said. “This investment package is about telling a positive story about economic growth in clean energy.”