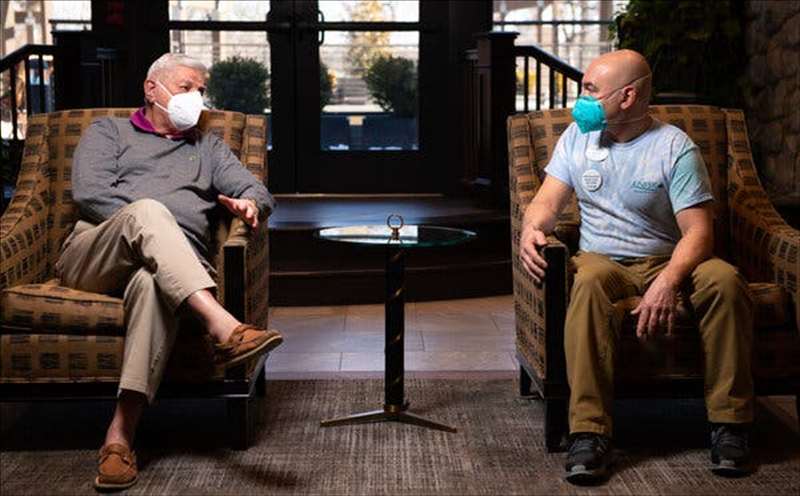 As legal experts and ethicists debate, some companies aren’t waiting.

For much of the winter, Meryl Gordon worried about the people caring for her 95-year-old mother, who was rehabbing in a Manhattan nursing home after surgery for a broken hip.

“Every week they sent out a note to families about how many staff members had positive Covid tests,” said Ms. Gordon, a biographer and professor at New York University. “It was a source of tremendous anxiety.”

Ms. Gordon feels reassured now that her mother is fully vaccinated and has returned to her assisted living facility. But what about the two home care aides who help her 98-year-old father, David, in his Upper West Side apartment?

Neither has agreed to be vaccinated. David Gordon’s doctor has advised him to delay Covid vaccination himself because of his past allergic reactions.

Ms. Gordon has not insisted that the caregivers receive vaccinations. “You’re reluctant to do something that could cause you to lose the people you rely on,” she said. But she remains uneasy.

It’s a question that many long-term care employers, from individual families to big national companies, are confronting as vaccines become more available, although not available enough: In a pandemic, can they require vaccination for those who care for very vulnerable older adults? Should they?

Some employers aren’t waiting. Atria Senior Living, one of the nation’s largest assisted living chains, has announced that by May 1 all staff members must be fully vaccinated.

Silverado, a small chain of dementia care homes, most on the West Coast, mandated vaccination by March 1. Juniper Communities, which operates 22 facilities in four states, has also adopted a mandate.

“We felt it was the best way to protect people, not just our residents but our team members and their families,” said Lynne Katzmann, Juniper’s chief executive. Of the company’s nearly 1,300 employees, “about 30 individuals have self-terminated” because of the vaccination requirement, she reported.

Juniper’s experience supports what public health experts have said for years: Vaccine mandates, like those that many health care organizations have established for the flu vaccine, remain controversial — but they do increase vaccination rates. As of Feb. 25, 97.7 percent of Juniper residents had received two vaccine doses, and so had 96 percent of its staff members.

A national recruiting platform for health care companies, myCNAjobs.com, last month polled 250 companions, aides and nursing assistants in facilities and in home care; it interviews thousands more daily. It estimates that 35 percent plan to be vaccinated, 20 percent do not and more than 40 percent remain unsure.

These workers can’t distance from the older people they help with tasks like bathing, dressing and toileting. As they enter and leave facilities and private homes, often working multiple jobs, these workers can spread the coronavirus, and they and their families are likewise vulnerable to its dangers.

“It’s unwise to mandate a vaccine while it’s under an emergency use authorization,” as the three vaccines in use in the United States are, said Lawrence Gostin, a law professor at Georgetown University. Because mandates during an E.U.A. could bring legal challenges, he advised waiting for full Food and Drug Administration approval.

That could come as early as next month for the Pfizer-BioNTech and Moderna vaccines. After that, “I would expect state or local governments might mandate that people working in health care be vaccinated,” said Mr. Gostin, who directs a World Health Organization center on health law. “They’d have the right to do that.”

Other public health specialists argue for incentives — carrots instead of sticks. With long-term care chronically understaffed, “I don’t think we want to do anything right now to push people out of those settings,” said David Grabowski, a health policy researcher at Harvard Medical School.

He suggests far more substantial rewards than the gift cards or free meals some facilities are offering, as well as paid time off, so that employees can get inoculated and afford to miss a day’s work or two if they have reactions.

“There are worse things than putting $500 to $1,000 into the pockets of workers who’ve been the backbone of long-term care before the epidemic and have had a terrible time since,” he said. “It’s the most dangerous job in America right now.”

She endorses reimbursing staff members for time and expenses. But, she noted: “There’s good evidence from behavioral economics that offering money signals taking risks. These vaccines really are safe and effective, so we don’t want to solidify people’s fears.”

Probably the thorniest problem is vaccinating the largest segment of the nation’s direct care workers, the roughly 2.3 million people working in private homes.

“It’s going pretty badly,” said Vicki Hoak, executive director of the Home Care Association of America, which represents 3,200 home care agencies. Although home care workers are given priority for vaccinations in every state, they are struggling to get them, she said.

Without a central workplace, they will be harder to reach, educate and vaccinate than aides in nursing homes and assisted living centers. (Some, privately hired by individuals and families through the so-called gray market, don’t work for agencies at all.)

“Vaccine hesitancy is absolutely a factor, but more so is the lack of easily accessible opportunities to get vaccinated,” said April Verrett, president of S.E.I.U. Local 2015, the union representing almost 400,000 home care aides in California.

People working several jobs can’t wait in long lines, she pointed out. They may not have cars for drive-through sites, or internet access for online portals. “I don’t think mandates would do anything to build the kind of trust and confidence needed to get people vaccinated,” Ms. Verrett said.

Some individuals who hire home care aides privately, including Ms. Gordon, say they will require future candidates to be vaccinated.

For now, though, most employers seem to favor a voluntary approach: answering staff questions, combating disinformation, helping workers get access to vaccines through mobile and pop-up clinics, perhaps providing transportation. Local 2015 has adopted an updated Rosie the Riveter icon with a rolled-up sleeve as part of its campaign to encourage members’ vaccination.

“We need to listen to people’s concerns, talk about what we know,” Dr. Largent said. “I think we’ll continue to see hesitancy go down as they see people like them being vaccinated.”