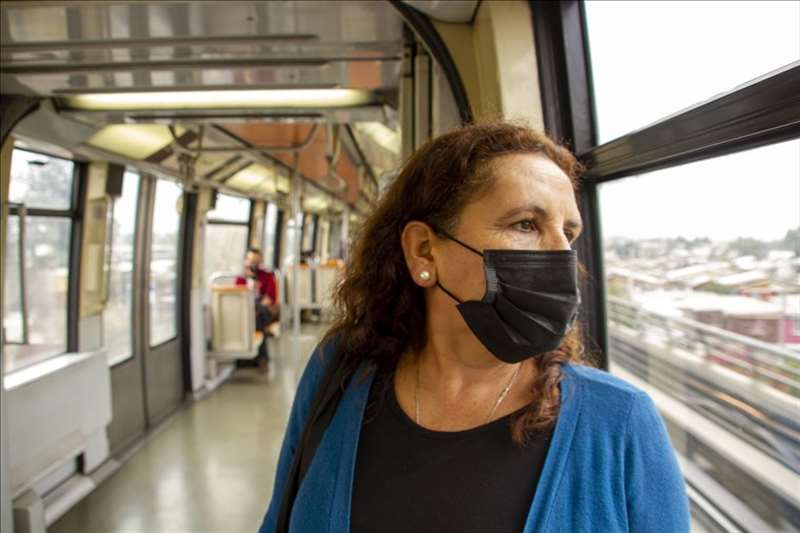 SANTIAGO, Chile — A year after the pandemic began, Genoveva Fernández Rodríguez, 59, a house cleaner in Chile, is still vigilantly wearing her mask, using alcohol gel and disinfecting her clothes after work.

Fernández will get her first vaccine dose Thursday, but as she rides to work each day on Santiago’s metro system, she finds herself actively dodging groups of mainly young people who she feels have given up on the basic measures against the coronavirus.

A massive second wave of the coronavirus is gripping Chile, despite a much-lauded vaccination program that is the best in Latin America and one of the top worldwide.

Millions of Chileans like Fernández are returning to full lockdown Thursday after health authorities this week ordered a return to Phase One restrictions. The renewed order means 70 percent of Chile’s 19 million people will be confined to home under tighter measures, such as the removal of permits to visit supermarkets on weekends.

On Saturday, Chile recorded its highest number of daily cases since the beginning of the pandemic, 7,084 new Covid-19 cases, breaking the single-day record of 6,938 reported in June.

The second wave is edging the country’s health care system perilously close to the breaking point. Critical bed occupancy is at 95 percent, and many medical staff members embroiled in Covid-19-infected wards for a year — sometimes working on complex cases beyond their expertise levels — have taken medical leave because of exhaustion and stress.

Delivering around 225,000 doses a day — mostly of the Chinese Sinovac vaccine — Chile has administered nearly 9 million doses so far, equivalent to 47 doses per 100 people, according to the University of Oxford in England. Only Israel and the United Arab Emirates have administered more. By contrast, the second-highest performer in Latin America is Brazil, at 7 doses per 100 people.

“I see young people everywhere gathering in big groups, at birthday parties or for holidays. Masks are mandatory in Chile, but I see many youngsters with them around their chins, eating food on the subway, just not being careful,” Fernández said. “I think they believe the government is trying to manipulate them with the rules, but it just feels like they don’t care about protecting me as an older person.”

Dr. Ximena Aguilera Sanhueza, director of Chile’s Epidemiology and Health Policy Center, who sits on the Covid-19 advisory board to Chile’s Health Ministry, said: “Young people are drivers of the pandemic, but large increases in mobility over the recent summer also appear to be a major causes of the increase in infections. There are many variables, always changing.”

A report by Universidad del Desarrollo, where Aguilera is based, tracked mobile phone data that showed vast increases in people’s movements in January and February — when Chileans were permitted to travel on vacation after interregional travel had previously been banned except for essential cases.

The holiday allowance saw 5 million people moving around the country in summer at the beginning of the year, and cases have now dragged Chile into a medical crisis, with winter looming.

“We are now at a critical stage and in a race between having enough intensive care units and staff for patients and the protection we hope will be gained by continuing the vaccines,” Aguilera said.

Dr. Claudia Cortés, vice president of the Chilean Society of Infectious Diseases, said some aspects of the second wave were even more worrying than the first wave.

“We expect the cases to continue to rise into the coming weeks, and this does not bode well when our hospital system is already close to collapse,” Cortés said. “In the first wave, sporadic outbreaks meant we could evacuate patients to other hospitals with more beds available, but following the vacations the hospitals are at capacity all over the country.”

Aguilera and Cortés cited a mix of factors that contributed to the rise in cases, with new variants from Brazil and the U.K., now confirmed in Chile, playing a role.

But there are strong suggestions that the fanfare and hype around Chile’s successful program might also have lulled people into dropping their guard.

“The government was overoptimistic, and there was a mishandling of information around the good initial rollout of vaccine,” Cortés said. “It seems people got the impression everything is fine now, but there needs to be a clear message that the vaccines are just one part of combatting the pandemic. It does not mean that we can forget the basics like social distancing and wearing masks.

“Nearly 6 million people have received their first dosage, but only 3 million have received their second dose,” she said. “Peak immunity for individuals doesn’t occur until around 14 days after the second dosage, and to achieve herd immunity, we need around 80 percent of the population to reach that point. We do not expect to arrive there until around June or July at the current rate, and even then, this does not provide full protection from infection.

Liam Miller is a freelance journalist based in Chile.