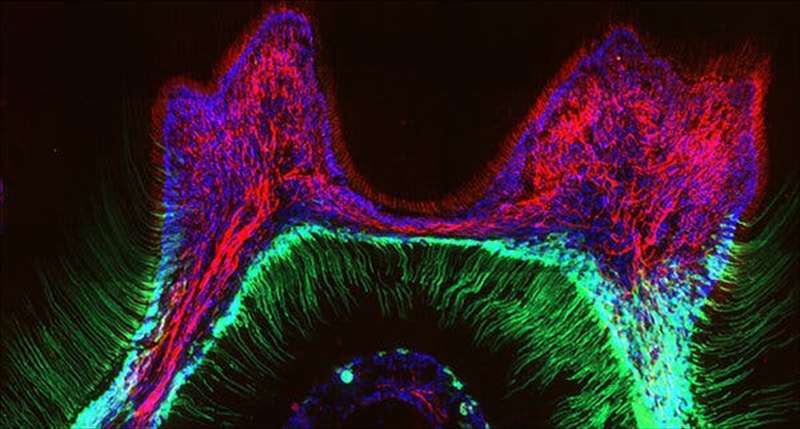 Researchers figured out how a jolt of discomfort gets from the damaged outside of your tooth to the nerves inside it.

There’s nothing quite like the peculiar, bone-jarring reaction of a damaged tooth exposed to something cold: a bite of ice cream, or a cold drink, and suddenly, that sharp, searing feeling, like a needle piercing a nerve.

More than a decade ago, Dr. Katharina Zimmerman, now a professor at Friedrich-Alexander University in Germany, discovered that cells producing a protein called TRPC5 were sensitive to cold. When things got chilly, TRPC5 popped open to form a channel, allowing ions to flow across the cell’s membrane.

Ion channels like TRPC5 are sprinkled throughout our bodies, Dr. Zimmerman said, and they are behind some surprisingly familiar sensations. For instance, if your eyes start to feel cold and dry in chilly air, it’s a result of an ion channel being activated in the cornea. She wondered which other parts of the body might make use of a cold receptor such as TRPC5. And it occurred to her that “the most sensitive tissue in the human body can be teeth” when it comes to cold sensations.

Within the protective shell of their enamel, teeth are made of a hard substance called dentin that’s threaded with tiny tunnels. At the heart of the dentin is the tooth’s soft pulp, where nerve cells and cells called odontoblasts, which manufacture dentin, are intertwined.

The prevailing theory for how teeth sense cold had been that temperature changes put pressure on the fluid in dentin’s tunnels, somehow provoking a response in those concealed nerves. But there was little detail about how exactly that could be happening and what could be bridging the gap between them.

Dr. Zimmerman and her colleagues looked to see whether mice engineered to lack the TRPC5 channel still felt tooth pain as normal mice did. They were intrigued to find that these mice, when they had damage to their teeth, did not behave as if anything was amiss. They looked, in fact, about the same as if they had been given an anti-inflammatory painkiller, Dr. Zimmerman said.

Her co-author Dr. Jochen Lennerz, a pathologist at Massachusetts General Hospital, checked human teeth for signs of the ion channel and found it in their nerves and other cells. That suggested that the channel might have a role in a person’s perception of cold.

Over many years, the researchers constructed a way to precisely measure the nerve signals traveling out of a mouse’s damaged molar. They tested their ideas with molecules that could block the activity of various channels, including TRPC5.

The picture they slowly assembled is that TRPC5 is active in the odontoblasts. That was a bit of a surprise, as these supporting cells are best known for making and maintaining dentin, not aiding in perception. Within the odontoblasts, Dr. Lennerz said, TRPC5 pops open when the signal for cold comes down the dentin tunnels, and this results in a message being sent to the nerves.

As it happens, one substance that keeps TRPC5 from opening is eugenol, the main ingredient in oil of cloves, a traditional treatment for toothache. Though the Food and Drug Administration in the United States is equivocal about eugenol’s effectiveness, if it does lessen the pain for some people, it may be because of its effect on TRPC5.

Perhaps the knowledge that this channel is at the heart of cold-induced pain will lead to better treatments for dental pain down the road — better ways to keep that message from becoming overwhelming.