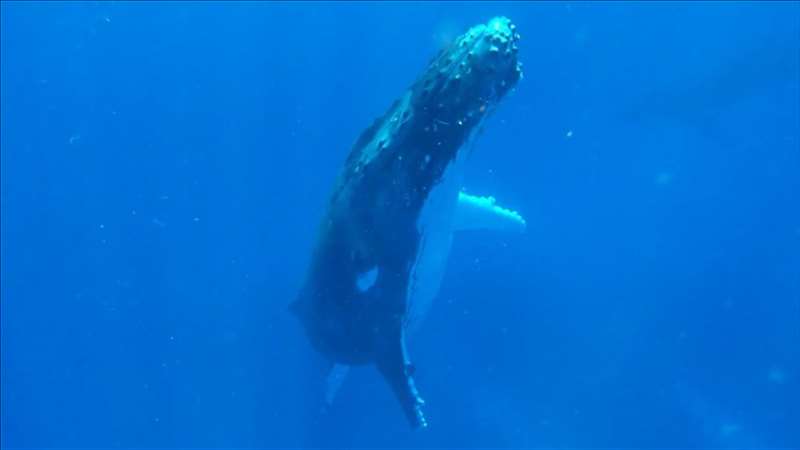 As one of the pioneers of whale watching in Iceland, Hardarson has taken people onto ocean waters for nearly 30 years to experience a close encounter with some of the largest animals in the world.

“Very mystical creatures,” he said, “floating around in their weightlessness.”

On a recent morning, Hardarson took a handful of visitors on his boat that usually holds 90 passengers to spot humpback and fin whales in Skjalfandi Bay.

“I think, overall, the pandemic has largely been a positive for whales,” said Ari Friedlaender, a marine ecologist and biologist with the University of California at Santa Cruz.

He is studying how the quieter oceans have affected whales by measuring their stress levels through hormone samples. Friedlaender said animals use acoustics such as whale songs to communicate with one another and locate food. Noise in the environment can interfere with those communications and other critical life functions

“The thought is that as you decrease the amount of human activity and noisy environment, we’re going to see a decrease in the stress hormone levels of these animals,” he said.

Friedlaender said stress affects whales similarly to how it has an impact on humans, changing their behavior and ability to perform physically and mentally. Stress can also lead to long-term changes affecting a whale’s overall health and its ability to reproduce.

The pandemic has had an even more concrete impact on the whale population off Iceland’s coast: It has helped accelerate the end of commercial whale hunting.

Iceland is one of only three countries in the world that still allow commercial whaling, the other two being Japan and Norway, and last year two Icelandic whaling companies halted hunting operations due to health restrictions. Operators told local media that social distancing regulations would make the usual processing onboard impossible.

In fact, much of the demand for whale meat within Iceland had been from tourists who wanted to try it during their visits, she said. Icelanders have re-examined their relationship to whales in recent decades.

“I think tourism started and we started to get just people from all over the world. We got a new perspective, and it’s just in that time that we realized really that our land is beautiful, our water is good and also that people were interested in whales,” she said.

Hardarson, the captain of the whale watching boat, said that people have stopped eating whale meat for several reasons, including realizing the senselessness of killing an animal that can live for almost a century. And he highlighted another simple reason, as well.

“They are worth way more alive than dead,” he said. “I think there’s going to be no commercial whaling, and in the future. I can see no reason why there should be.”

He acknowledged that animals are also affected by whale watching tours but said the experience helps motivate people to protect them.

“There are threats also connected to whale watching and something you have to keep in mind to try not to overstress or put too much pressure on the resource in this way,” he said. “We are very concerned about this, so we are trying to keep down speed and we are trying to minimize our carbon footprint.”

His hope now is that with tourism growing as Iceland allows vaccinated visitors to enter the country without having to quarantine, whale watching will once again be big business, helping to support the animals and the whole town.

Sarah Harman is a foreign correspondent for NBC News.

Carlo Angerer is a multimedia producer and reporter based in Mainz, Germany.