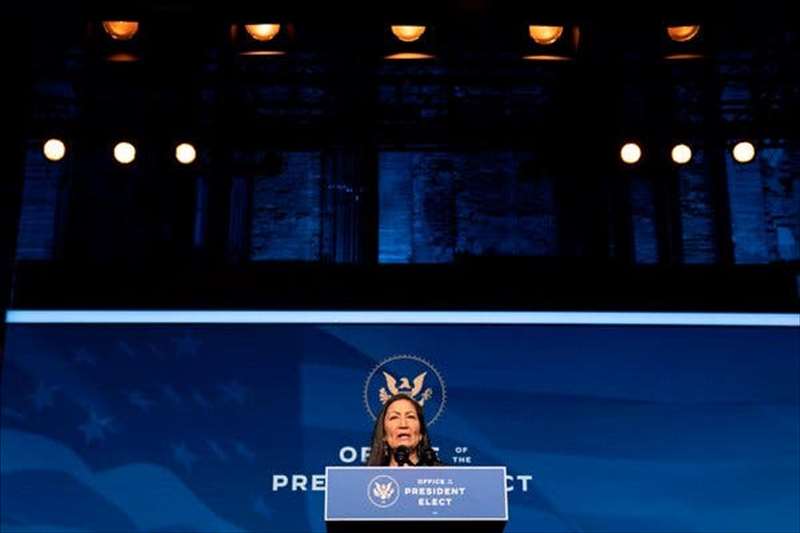 President Biden’s choice for interior secretary faces her confirmation hearing on Tuesday. Democrats see her as embodying the hopes of the new administration; Republicans object to her activism.

On Tuesday, when she faces her confirmation hearing, another label will be applied to her nomination: embattled.

Her detractors have zeroed in on her activism, especially her forthright denunciations of any and all oil and gas exploration on public land and her fierce opposition to the natural gas extraction method known as hydraulic fracturing, or fracking.

“Representative Haaland has a long record as a vehement opponent of American fossil fuels,” said Senator John Barrasso of Wyoming, one of the nation’s largest oil, gas and coal producing states, who is the ranking Republican on the Senate Energy and Natural Resources Committee, which will consider her nomination this week.

Propelled by an activist campaign, Ms. Haaland emerged last fall as a dark-horse candidate to head the Biden administration’s Interior Department, the vast government agency that oversees the nation’s 500 million acres of public lands and is most responsible for the well-being of the nation’s 1.9 million Indigenous people.

Ms. Haaland, a citizen of Laguna Pueblo, one of the country’s 574 federally recognized tribes, would also become the face of one of Mr. Biden’s most divisive climate change policies, his pledge to ban all fracking on public lands.

To call her nomination the most endangered of Mr. Biden’s slate would be untrue. That title belongs to his choice to head the White House Office of Management and Budget, Neera Tanden, who has garnered opposition not only from Republicans but also the Senate’s most conservative Democrat, Joe Manchin III of West Virginia.

What differentiates Ms. Tanden’s nomination from Ms. Haaland’s is the depth of their support from the Democratic Party’s activist wing. Ms. Tanden’s social-media needling of Senator Bernie Sanders, independent of Vermont, and her association with Hillary Clinton has left her liberal support tepid at best, while Ms. Haaland has become a favorite of the Sanders wing, who see her as a transformational figure. She could also win the support of some Republican moderates, such as Susan Collins of Maine and Lisa Murkowski of Alaska, whose state is 18 percent Alaska Native.

“The number of folks across the country who are energized about her nomination, I’ve never seen,” said Collin O’Mara, the head of the National Wildlife Federation and a former top environmental official in Delaware who worked with the Biden administration’s transition team as it assembled its list of nominees for environmental posts.

In the center of that partisan chasm once again sits Senator Manchin, who leads the Senate Energy Committee and has a history of siding with Republicans on issues of energy and climate change.

To win him over, Ms. Haaland will highlight her distinctive personal story and a hardscrabble background that could appeal to a West Virginian who identifies with his increasingly Republican state’s working class.

“I’m not a stranger to the struggles many families across America face today,” she will say, according to prepared remarks distributed by the Interior Department on Monday afternoon. “I’ve lived most of my adult life paycheck to paycheck.”

“It’s because of these struggles that I fully understand the role interior must play in the president’s plan to build back better; to responsibly manage our natural resources to protect them for future generations — so that we can continue to work, live, hunt, fish, and pray among them,” Ms. Haaland will say, according to the remarks.

A “35th-generation New Mexican” and the child of military veterans, she attended 13 public schools before graduating from high school, started a salsa company and worked as a cake decorator before putting herself through college and law school on food stamps and student loans.

In 2015, Ms. Haaland became the head of the state Democratic Party and helped to flip the New Mexico Statehouse to Democratic control. In 2018, she and Sharice Davids of Kansas became the first two Native American women elected to Congress.

That personal story has not insulated her from partisan attacks. Oil-state Republicans have called Ms. Haaland “radical” and “divisive.”

Some of Ms. Haaland’s past environmental positions have gone further than those of Mr. Biden, who has sought to reassure the oil and gas industry and labor unions that his plans do not include shutting down existing drilling and fracking on public lands. Ms. Haaland was an original co-sponsor of the Green New Deal — the resolution written by Representative Alexandria Ocasio-Cortez, Democrat of New York, and Senator Edward Markey, a Massachusetts Democrat — which calls for the United States to eradicate fossil fuel pollution within a decade.

Her congressional campaign sponsored the People’s Demand for Climate Change, a petition demanding that governments “pledge to an outright and immediate ban on fracking.” In 2016, Ms. Haaland joined the Standing Rock Sioux protesters in North Dakota who camped out for months in opposition to the Dakota Access oil pipeline.

Senator Steve Daines, a Republican from the oil- and coal-rich state of Montana who also sits on the Senate energy panel, said that while he did not agree with Mr. Biden’s energy and climate change agenda, he has voted to confirm nominees such as Jennifer Granholm for energy secretary and Pete Buttigieg for the transportation secretary.

But Mr. Daines said Ms. Haaland could be more strongly guided by the activist beliefs she espoused before her nomination than by Mr. Biden’s. “I’m not convinced that she can divorce herself from those radical views,” Mr. Daines said in an interview.

There is also opposition in her own home state, where the $2 billion generated annually by oil and gas production on public lands make up nearly a quarter of New Mexico’s budget.

“A permanent ban would devastate New Mexico’s economy,” said Ryan Flynn, executive director of New Mexico Oil and Gas Association. “The consequences on New Mexico would be more severe than any other state.”

Three Democrats who are preparing Ms. Haaland for her hearing said they remained confident of Ms. Haaland’s confirmation.

Mr. Manchin declined a request for an interview, although his spokeswoman, Sam Runyon, said he was looking forward to Tuesday’s hearing, “where they will further discuss her experience and qualifications to lead the Department of the Interior.”

Propelling her forward is a national campaign to elevate her candidacy from outlier to inevitable.

In a letter made public last week, nearly 500 liberal, environmental and Native American groups wrote, “Representative Haaland is a proven leader and the right person to lead the charge against the existential threats of our time — tackling the climate, extinction and Covid-19 crises, and racial justice inequities on our Federal public lands.”

The Montana Wildlife Fund ran an ad signed by 2,500 Montanans in four newspapers urging Mr. Daines to vote for her.

Ms. Haaland’s supporters said they were prepared to campaign against any senator willing to vote against the first Native American cabinet secretary.

“There is a potential that Republicans will burn their bridges with tribal and Indigenous voters if they come out against her,” said Julian Brave NoiseCat, vice president of strategy and policy at the research group Data for Progress who spearheaded last fall’s campaign to urge Mr. Biden to nominate Ms. Haaland.

“In Arizona, Wisconsin, Alaska, and New Mexico — a lot of western parts of the U.S. — it’s a significant part of the vote,” he added. “If you want to be competitive in those areas, it’s better not to lose 80 percent of the Native vote.”

In a statement last year, Mr. Young called Ms. Haaland a “consensus builder” who has “been open to working across the aisle” and “would pour her passion into the job every single day.”