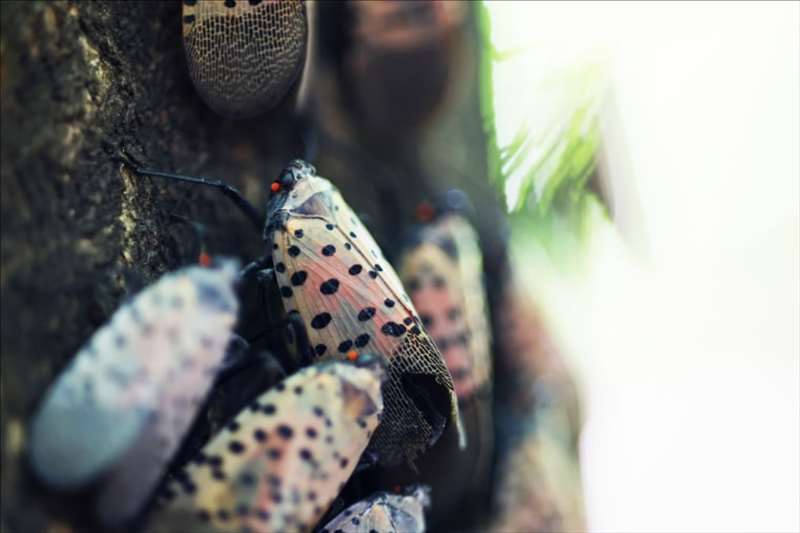 Now, as adult lanternflies begin to perish during the winter, experts say those efforts might have curbed the species’ spread to some degree. But their eggs can survive the cold to hatch in the spring, so a new generation of lanternflies is expected to swarm when the weather warms.

Rachel Stonecraft, a content creator in Pennsylvania, said that she was never interested in insects but that she turned to TikTok to exact her vengeance on the lanternflies that swarmed her home last summer. Now she uses the platform to teach viewers about the bugs and how to destroy them.

“There have been times when I’ve seen 50 to 100 on the screen of my window,” Stonecraft said. “When you go outside, they’re everywhere. And then when you come inside, you feel like they’re still on you.”

“For crops, it’s a really serious pest,” said Kelli Hoover, a professor of entomology at Pennsylvania State University. “Vineyards are having to spray many, many times more than they normally would to try to keep lanternflies under control.”

As lanternflies feed on trees and vines, they deplete the plants’ nutrients and starch reserves, making the plants vulnerable to freezing and dying during the winter. Some vineyards have seen reductions in grape yields of up to 90%, Hoover said, and a few have lost their entire crops.

Liv Volker, who also runs a TikTok page dedicated to lanternfly management, said her interest in the insects began after her partner, who works in the wine industry, watched them destroy vineyards. Then she experienced the insects for herself when they proliferated around the hospital where she works.

“Each day I’m finding another tree or another plant that I didn’t know they fed on,” Volker said. “It sucks the life out of them, so think of them like little plant vampires.”

Her videos have accrued more than 10 million likes.

Anne Johnson, a doctoral student studying the spotted lanternfly in Hoover’s lab at Penn State, believes the viral trends can make a difference. Although the Agriculture Department is working with states to control lanternfly populations, she said, most government efforts will affect only public lands.

“It’s really helpful that we have the public getting involved, as well, because they’re the ones who can actually go out and address the spotted lanternfly on their own lands in a way that a lot of our governmental or public agencies cannot,” Johnson said.

But Hoover said that although squashing lanternflies may help people feel involved, it will take a lot more than that to stem their spread.

Spotted lanternflies are native to China, where they don’t often become a pest. But here, they have no consistent natural predators. Some birds and insects, such as spiders and praying mantises, eat them occasionally, but chemicals in the bugs’ bodies make them bitter.

What’s more, a single female lanternfly lays up to 150 eggs every fall, and the egg masses often resemble smudges of mud, so it can be hard to find and destroy them.

If they are spotted, however, the easiest way to kill the eggs is to treat them with soybean oil or scrape them off into a bag of alcohol. And for people hoping to deter lanternflies from settling in their yards, Hoover recommends ridding properties of the tree the insects most commonly gather on: the tree of heaven, which is also invasive. Hack into the tree, squirt insecticide on the wound, then cut it down and kill the root system, she said.

Hoover said the only way to effectively reduce lanternfly populations now is to use insecticides, but scientists are working to develop methods that don’t rely on toxic chemicals.

Johnson’s research, meanwhile, has indicated that the tree of heaven boosts lanternflies’ bitter taste, so removing the trees might at least make the insects more appetizing to predators.

“We’ll always have to deal with spotted lanternfly,” Johnson said. “But hopefully over time, what we’ll be able to do is have a lower population level — know how to handle it so that they can’t cause as much damage.”

Russel Abad is a video producer for NBC News and Stay Tuned.