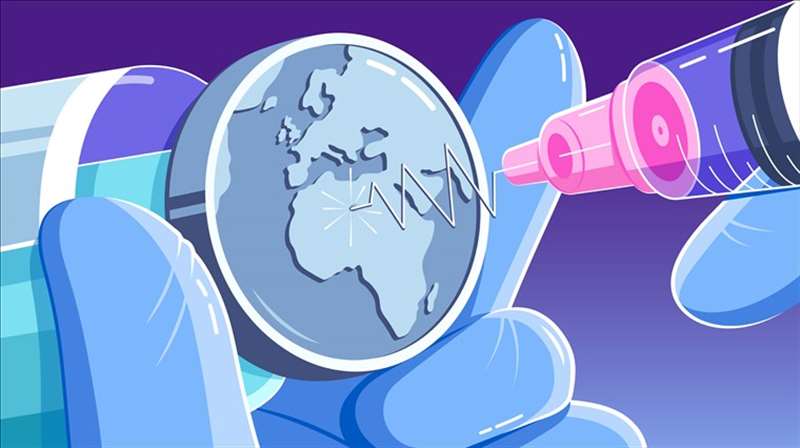 LONDON — It seemed like a windfall in the campaign to vaccinate the world.

COVAX’s efforts have been throttled not by a lack of money but a lack of supply. And so far the limited doses that are being made have mostly gone to the U.S. and other rich countries.

In a deeply unfair fight, COVAX has struggled to compete with its own largest donors — wealthy nationalistic governments whose ruthless tactics rarely match their altruistic rhetoric.

Some critics say Biden is repeating some of the same moves: pledging money and words to COVAX, but with the other hand grabbing the scarce supplies that it desperately needs.

“There is a sense that we’ve made some progress, from the U.S. giving no vaccines at all to it giving $4 billion — but that doesn’t go far enough,” Sharifah Sekalala, an associate professor of global health law at England’s University of Warwick, said. “We need to reframe this entire discussion. What will help Americans the most is not vaccinating every American first.”

The project’s main aim is to supply doses to 20 percent of people in 92 low- and middle-income countries, whose population totals some 3.6 billion. But nine months after the partnership was formed, that dream has so far failed to materialize.

“This is going to be a huge public health problem in a few months unless it is corrected and corrected quickly,” Dr. Ahmed Ogwell Ouma, the deputy director of the Africa Centres for Disease Control and Prevention, said. “It is quite bizarre for a young person in one part of the world to be getting the vaccine, while a front-line health worker in Africa is still waiting.”

Both the moral case and the self-interested case for vaccinating the world were behind Biden’s $4 billion pledge.

“We think that it is vital to take a role in beating the pandemic globally, and to really put U.S. leadership out there to do this,” a senior administration official said.

But some of the new administration’s policies are the same ones that COVAX officials blame for fueling the inequality we see today. That’s because the central problem here is not about money at all, but supply.

Without naming names, WHO Director-General Tedros Adhanom Ghebreyesus said Monday that rich countries had actually prevented COVAX from accessing its own supply.

“If there are no vaccines to buy, money is irrelevant,” he said.

One long-term solution might be to waive intellectual property rights, so vaccines can be produced around the world. So far, that has been resisted by wealthy countries and most large pharmaceutical companies.

A shorter-term fix would be for rich nations to donate shots they’ve already stockpiled. But the White House says it only plans to do this after every American has been offered one. That goes against the express pleas of COVAX and other experts, who want the sharing to start as soon as rich countries have immunized priority groups.

Sharing immediately is not only “the right thing to do from a humanitarian perspective, it is in the interest of rich countries to stop transmission everywhere,” said Dr. Tom Kenyon, a former director of the CDC’s Center for Global Health and the former CDC director for Ethiopia, now chief health officer at Project HOPE, an international global health organization.

Ultimately, rich nations need to stop implying that they are sharing doses out of charity, and recognize it is a fundamental part of their obligations as members of COVAX, according to Sekalala at the University of Warwick.

“It cannot be that you vaccinate everybody in your own country and then you go to COVAX as an afterthought if you have anything left over,” she said.

The White House did not respond to NBC News’ request for a response to these criticisms.

COVAX’s initial vision was that everyone would use the program to buy vaccines: Rich nations would donate cash to ramp up research and manufacturing, and rich and poor nations would divvy up shots fairly at the end.

“It was perhaps overly idealistic and ambitious,” said Charles Clift, a former WHO and British government official specializing in getting medicines to developing countries.

“It was very clear that the win-win option was a global solution,” WHO Assistant Secretary-General Dr. Bruce Aylward told NBC News. “But national interests played a big part in the decisions going other ways.”

Compare COVAX’s dizzying challenges with the America-first approach of the Trump administration, the effects of which still linger.

This investment came with strings attached: The U.S. expected to be served first.

Given the political pressures, “vaccine nationalism is at the same time ethically indefensible and probably politically inevitable,” said Justine Landegger, a senior vaccine consultant at Resolve to Save Lives, which is working with African countries to prepare for their rollouts.

By contrast, COVAX took months to raise enough cash to enter negotiations with drugmakers. And even then, it had to act as a go-between for dozens of nations, always keeping one eye on value for money.

It was essentially saying: “‘I understand that you can sell these vaccines for three times their price, but I actually want a discount and I want a lot of them,'” said Achal Prabhala, coordinator of the AccessIBSA project, which campaigns for global access to medicines. “You could imagine what an amazingly tempting business proposition that is.”

Though the process faced by the U.S. and others was far from simple, COVAX had to grind its way through a far more complex web of regulatory systems and indemnity agreements on national and multilateral levels.

Aylward at the WHO recalls seeing the deals struck by rich countries and thinking, “Wow, you are paying three four times as much — these countries were desperate.”

One looming potential flaw in COVAX’s short-term rollout is that it depends largely on just the one vaccine developed by British-Swedish pharmaceutical giant AstraZeneca and Oxford University.

Officials involved in the deployment say they have no plans to significantly modify their strategy, however.

Some also believe COVAX should have expanded its horizons.

“We started with quite a high degree of snobbery about non-Western countries lacking our regulatory scrutiny,” said Danny Altmann, an immunology professor at Imperial College London. “In fact, the majority of these vaccines have been safe, efficacious and should all be in the toolkit.”

COVAX has been working to add Chinese vaccines to its portfolio, Aylward at the WHO said, but it’s taken longer because China’s drugmakers aren’t as familiar with COVAX’s approvals process.

Some COVAX countries, including Pakistan, Egypt, Indonesia and Ukraine, have already taken matters into their own hands, striking their own side deals with Beijing, according to Airfinity, a pharmaceuticals analytics company.

“It is frustrating because every time one country is making a bilateral deal, the neighboring countries may say, ‘OK, maybe I should also do a bilateral deal,'” said Benjamin Schreiber, the lead COVAX coordinator at UNICEF, tasked with deploying these shots globally.

The forecast assumes COVAX will be able to obtain almost every dose made this year by the Serum Institute of India, the world’s biggest vaccine supplier by volume. But that manufacturer has signed deals with almost a dozen other countries, too.

“It may be they know things about their supply chain that we don’t know,” Taylor said. “But in terms of data that we do have access to, I don’t think their forecast for 2021 is realistic at all.”

In any case, the officials running COVAX are more eager to talk about the bigger picture.

They point out that without the program, the situation would be much grimmer for the world’s most vulnerable.

“It’s like you’ve ordered a big cake, and you look on your plate but nothing has arrived,” said Schreiber at UNICEF. “But it’s cooking, and the cake will come out, hopefully soon. And hopefully nobody will fall as the cake is coming from the kitchen to the table.”

Nothing like this has ever been attempted before, they say. And even after its sluggish and troubled start, vaccinating poor countries 12 months after the pandemic was declared looks like lightspeed when compared with any other global immunization program in history.

Most of all, Aylward at the WHO believes that initiatives like COVAX have dramatically shifted people’s expectations about what is ethically acceptable. Global access to medicine has always been deeply unfair — but this is the first time he’s seen such widespread calls for change in the way vital medicines and treatments are distributed.

“I’ve spent 30 years in international public health and disease eradication and I have never seen this,” he said. “The world is changing. It’s changing before our eyes, and that is fantastic. Because once you get there, you can’t go back.”