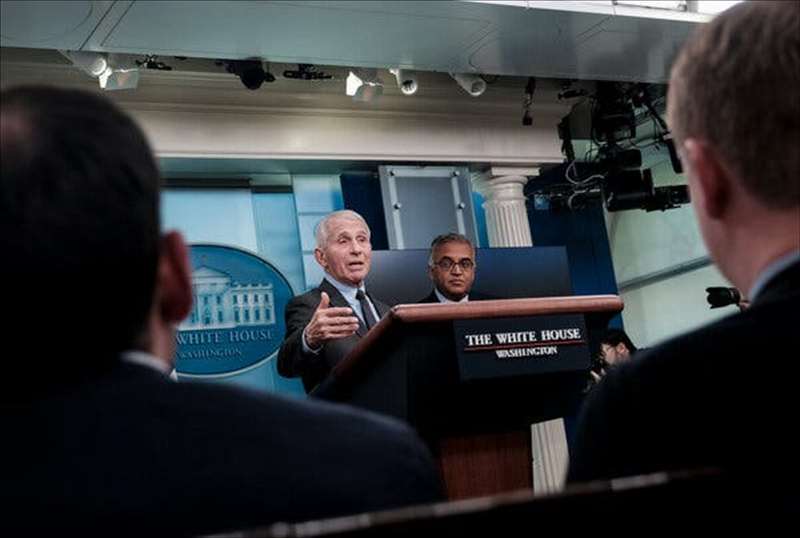 Dr. Anthony S. Fauci said the administration was optimistic that “we’re not going to see a repeat of what we saw last year,” when the Omicron variant swept through the country.

Federal health officials expressed optimism on Tuesday that the nation was better prepared to weather a surge of Covid-19 infections this winter compared with a year earlier, and they renewed their pleas for Americans to get an updated booster shot ahead of the holidays.

While the trajectory of the virus remains uncertain, Dr. Anthony S. Fauci, President Biden’s chief medical adviser, said the administration was hopeful that the combination of infections and vaccinations had created “enough community protection that we’re not going to see a repeat of what we saw last year at this time” when a brand-new variant, Omicron, emerged seemingly out of the blue.

Now, Dr. Ashish K. Jha, the White House’s Covid-19 response coordinator, said he was confident about the holiday season as long as Americans continued to get vaccinated and boosted. “Nothing I have seen in the subvariants makes me believe that we can’t manage our way through it effectively, especially if people step up and get their vaccine,” he said at a White House briefing.

And where the coronavirus is headed remains a mystery. Federal officials have been watching a new subvariant of Omicron called XBB with some trepidation. The new subvariant accounts for only a tiny percentage of cases in the United States so far, but it is showing up in testing of travelers at the nation’s major international airports and has taken hold in India and Singapore.

Dr. Fauci said that XBB appeared exceptionally agile at evading the antibodies that are created by prior infection or vaccination and that form the body’s first line of defense against the virus. But vaccine experts have long said that other parts of the immune system can kick in to ward off severe disease if antibodies fail to block the virus.

And Dr. Fauci said he and others were encouraged by data showing that countries like Singapore where XBB led to a jump in infections did not report a commensurate rise in hospitalizations.

“My message and my final message — maybe the final message I give you from this podium — is that, please, for your own safety, for that of your family, get your updated Covid-19 shot as soon as you’re eligible,” Dr. Fauci said.

The administration is making a renewed push for the new boosters over the next six weeks. It announced $475 million in spending to expand vaccination efforts at community health centers and other locations, and officials are hoping to reach more Americans by airing advertising during the World Cup. The government also warned that nursing homes must offer the updated shots to residents or face enforcement actions by regulators.

The push comes as the Centers for Disease Control and Prevention delivered what some experts described as encouraging news about the effectiveness of the new shots.

“Is this a home run? No, but it’s a good base hit,” said Dr. Peter Marks, the top vaccine regulator at the Food and Drug Administration, who pushed for development of the new booster shots.

The study, the first one published that examined the real-world effectiveness of the new shots, looked at 360,000 adults who reported Covid-19 symptoms between mid-September and mid-November. Its significance is limited by the fact that the Omicron subvariant that accounted for the largest number of infections during that period, BA.5, has receded and now accounts for only a quarter of cases in the United States.

“The variants in the real world have already moved on,” said Pei-Yong Shi, a virologist at the University of Texas Medical Branch who has conducted laboratory studies of the updated boosters both independently and in collaboration with Pfizer-BioNTech.

Dr. Shi also said it was difficult to measure how well the updated boosters were working because so many people now had some immunity from earlier infections, including people who were never vaccinated or boosted. That can make estimates of the effectiveness of the updated shots look artificially low, he said.

Dr. Roby Bhattacharyya, an infectious disease physician at Massachusetts General Hospital, said the C.D.C. study showed that the revised boosters were “clearly worth getting.”

Some other experts were more skeptical, saying that the new shots appeared to provide only moderate protection against symptomatic disease and that while such protection would help in the short term, it was unclear how long it would last.

John P. Moore, a virologist at Weill Cornell Medicine, said the researchers did not show whether the updated boosters worked better than the original boosters they replaced — a swap that came at a substantial cost to the federal government. “Personally, I doubt there would have been much, if any, difference, but we may never know,” he said.

While Americans’ shift indoors over the winter and the succession of holiday gatherings are expected to drive up cases, federal officials are not alone in their cautious optimism. Dr. Bhattacharyya said he did not expect the virus to cause as much suffering and death this winter as it did a year ago because “we’re a more immune population.”

Adults diagnosed with Covid who were prescribed Paxlovid had a 51 percent lower hospitalization rate within 30 days of their diagnosis than those who were not prescribed the medication, the study found. Researchers compared nearly 200,000 adults who received Paxlovid within five days of their diagnosis with more than 500,000 people who did not receive it during a five-month period ending in August.

The study found that only 28 percent of those eligible for Paxlovid were prescribed it. The researchers said the medication should be offered to everyone eligible, especially older adults and people with multiple underlying health conditions. The study did not address how often Covid symptoms rebounded after people finished the five-day treatment, a question that some providers say makes them wonder if the course of treatment is long enough.

Kody Kinsley, the top health official in North Carolina, said he hoped that the new study would coax some doctors and patients into using the medication. He said that roughly two-thirds of adults in his state were at high risk of severe disease from the coronavirus, but for reasons that were unclear, doctors were reluctant to prescribe Paxlovid to them.

“This has been a perennial issue and something we’ve been pretty vocal about,” he said, adding, “What we hear from people is: ‘I talk to my doctor and my doctor says: “Well, your symptoms are mild, so wait it out. And I don’t know if you need it.”’”

In fact, he said, the decision whether to take Paxlovid should depend on how vulnerable a patient is to a serious case of Covid-19, not on the severity of symptoms.