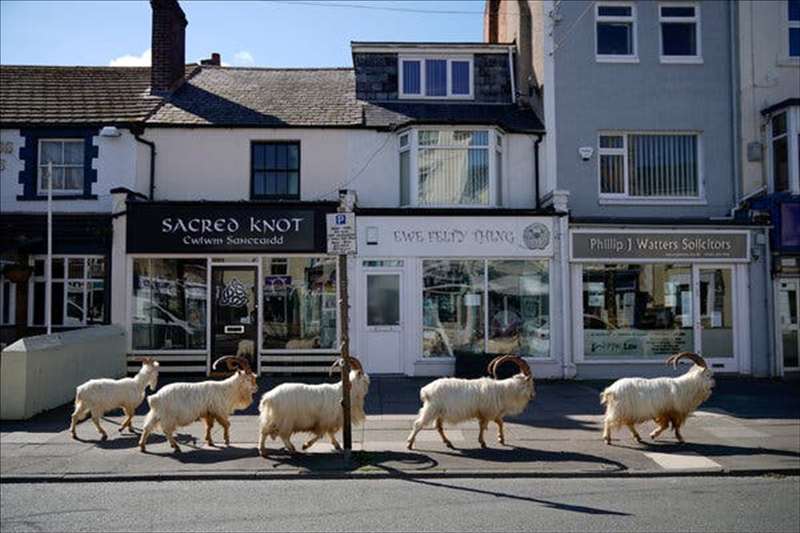 From the rise in poaching to the waning of noise pollution, travel’s shutdown is having profound effects. Which will remain, and which will vanish?

For the planet, the year without tourists was a curse and a blessing.

With flights canceled, cruise ships mothballed and vacations largely scrapped, carbon emissions plummeted. Wildlife that usually kept a low profile amid a crush of tourists in vacation hot spots suddenly emerged. And a lack of cruise ships in places like Alaska meant that humpback whales could hear each other’s calls without the din of engines.

That’s the good news. On the flip side, the disappearance of travelers wreaked its own strange havoc, not only on those who make their living in the tourism industry, but on wildlife itself, especially in developing countries. Many governments pay for conservation and enforcement through fees associated with tourism. As that revenue dried up, budgets were cut, resulting in increased poaching and illegal fishing in some areas. Illicit logging rose too, presenting a double-whammy for the environment. Because trees absorb and store carbon, cutting them down not only hurt wildlife habitats, but contributed to climate change.

“We have seen many financial hits to the protection of nature,” said Joe Walston, executive vice president of global conservation at the Wildlife Conservation Society. “But even where that hasn’t happened, in a lot of places people haven’t been able to get into the field to do their jobs because of Covid.”

From the rise in rhino poaching in Botswana to the waning of noise pollution in Alaska, the lack of tourism has had a profound effect around the world. The question moving forward is which impacts will remain, and which will vanish, in the recovery.

While the pandemic’s impact on wildlife has varied widely from continent to continent, and country to country, its effect on air quality was felt more broadly.

The most dramatic results came from the transportation sector, which posted a 14.7 percent decrease. It’s impossible to tease out how much of that drop is from lost tourism versus business travel. And there is every expectation that as the pandemic loosens its grip, tourism will resume — likely with a vengeance.

“The 7 percent drop last year is on par with what we would need to do year after year,” Dr. Smerdon said. “Of course we wouldn’t want to do it the same way. A global pandemic and locking ourselves in our apartments is not the way to go about this.”

Interestingly, the drop in other types of air pollution during the pandemic muddied the climate picture. Industrial aerosols, made up of soot, sulfates, nitrates and mineral dust, reflect sunlight back into space, thus cooling the planet. While their reduction was good for respiratory health, it had the effect of offsetting some of the climate benefits of cascading carbon emissions.

“We’ve come through this pandemic year when our lives changed more than any of us imagined they ever would,” Mr. McKibben said during a Zoom webinar hosted in February by the nonprofit Green Mountain Club of Vermont.

“Everybody stopped flying; everybody stopped commuting,” he added. “Everybody just stayed at home. And emissions did go down, but they didn’t go down that much, maybe 10 percent with that incredible shift in our lifestyles. It means that most of the damage is located in the guts of our systems and we need to reach in and rip out the coal and gas and oil and stick in the efficiency, conservation and sun and wind.”

Just as the impact of the pandemic on air quality is peppered with caveats, so too is its influence on wildlife.

In meaningful ways, however, the pandemic revealed that wildlife will regroup if given the chance. In Thailand, where tourism plummeted after authorities banned international flights, leatherback turtles laid their eggs on the usually mobbed Phuket Beach. It was the first time nests were seen there in years, as the endangered sea turtles, the largest in the world, prefer to nest in seclusion.

In addition to the sea turtles, elephants, leaf monkeys and dugongs (related to manatees) all made cameos in unlikely places in Thailand. “Dugongs are more visible because there is less boat traffic,” Mr. Manopawitr said. “The area that we were surprised to see dugongs was the eastern province of Bangkok. We didn’t know dugongs still existed there.”

He and other conservationists believe that countries in the cross hairs of international tourism need to mitigate the myriad effects on the natural world, from plastic pollution to trampled parks.

In other parts of Asia and across Africa, the disappearance of tourists has had nearly the opposite result. With safari tours scuttled and enforcement budgets decimated, poachers have plied their nefarious trade with impunity. At the same time, hungry villagers have streamed into protected areas to hunt and fish.

Jim Sano, the World Wildlife Fund’s vice president for travel, tourism and conservation, said that in sub-Saharan Africa, the presence of tourists was a powerful deterrent. “It’s not only the game guards,” he said. “It’s the travelers wandering around with the guides that are omnipresent in these game areas. If the guides see poachers with automatic weapons, they report it.”

In the Republic of Congo, the Wildlife Conservation Society has noticed an increase in trapping and hunting in and around protected areas. Emma J. Stokes, regional director of the Central Africa program for the organization, said that in Nouabalé-Ndoki National Park, monkeys and forest antelopes were being targeted for bushmeat.

“It’s more expensive and difficult to get food during the pandemic and there is a lot of wildlife up there,” she said by phone. “We obviously want to deter people from hunting in the park, but we also have to understand what’s driving that because it’s more complex.”

The Society and the Congolese government jointly manage the park, which spans 1,544 square miles of lowland rainforest — larger than Rhode Island. Because of the virus, the government imposed a national lockdown, halting public transportation. But the organization was able to arrange rides to markets since the park is considered an essential service. “We have also kept all 300 of our park staff employed,” she added.

While animals around the world were subject to rifles and snares during the pandemic, one thing was missing: noise. The whir of helicopters diminished as some air tours were suspended. And cruise ships from the Adriatic Sea to the Gulf of Mexico were largely absent. That meant marine mammals and fish had a break from the rumble of engines and propellers.

So did research scientists. Michelle Fournet is a marine ecologist who uses hydrophones (essentially aquatic microphones) to listen in on whales. Although the total number of cruise ships (a few hundred) pales in comparison to the total number of cargo ships (tens of thousands), Dr. Fournet says they have an outsize role in creating underwater racket. That is especially true in Alaska, a magnet for tourists in search of natural splendor.

“Cargo ships are trying to make the most efficient run from point A to point B and they are going across open ocean where any animal they encounter, they encounter for a matter of hours,” she said. “But when you think about the concentration of cruise ships along coastal areas, especially in southeast Alaska, you basically have five months of near-constant vessel noise. We have a population of whales listening to them all the time.”

Two years ago, in a move to protect Puget Sound’s tiny population of Southern Resident killer whales, which number just 75, Washington’s Gov. Jay Inslee signed a law reducing boat speeds to 7 knots within a half nautical mile of the whales and increasing a buffer zone around them, among other things.

Many cheered the protections. But environmental activists like Catherine W. Kilduff, a senior attorney in the oceans program at the Center for Biological Diversity, believe they did not go far enough. She wants the respite from noise that whales enjoyed during the pandemic to continue.

“The best tourism is whale-watching from shore,” she said.

Debates like this are likely to continue as the world emerges from the pandemic and leisure travel resumes. Already, conservationists and business leaders are sharing their visions for a more sustainable future.

In the meantime, climate change activists are calling on the flying public to use their carbon budgets judiciously.

For Mr. Walston of the Wildlife Conservation Society, tourists would be wise to put more effort into booking their next resort or cruise, looking at the operator’s commitment to sustainability.

“My hope is not that we stop traveling to some of these wonderful places, because they will continue to inspire us to conserve nature globally,” he said. “But I would encourage anyone to do their homework. Spend as much time choosing a tour group or guide as a restaurant. The important thing is to build back the kind of tourism that supports nature.”

Lisa W. Foderaro is a former reporter for The New York Times whose work has also appeared in National Geographic and Audubon Magazine.