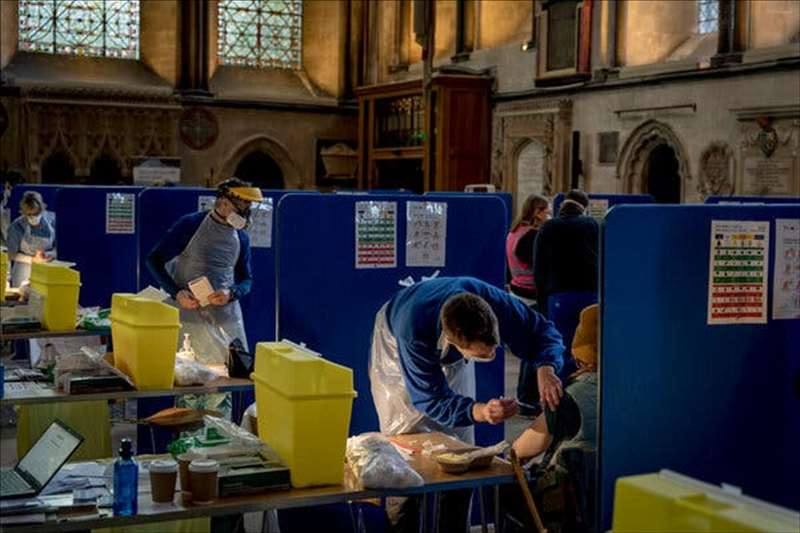 The new rule was based on sheer guesswork; there was no scientific data at the time demonstrating that mixing two coronavirus vaccines was safe and effective. But that may change soon.

In February, researchers at the University of Oxford began a trial in which volunteers received a dose of the Pfizer-BioNTech vaccine followed by a dose of AstraZeneca’s formulation, or vice versa. This month, the researchers will start analyzing the blood of the subjects to see how well the mix-and-match approach works.

As growing numbers of vaccines are being authorized, researchers are testing other combinations. A few are in clinical trials, while others are being tested in animals for now.

Mixing vaccines might do more than just help overcome supply bottlenecks. Some researchers suspect that a pair of different vaccines might work better than two doses of the same one.

“I think we’re on the cusp of some interesting data,” said Adam Wheatley, an immunologist at the University of Melbourne in Australia.

The concept of mixing vaccines — sometimes called a heterologous prime-boost — is not new to our pandemic era. For decades, researchers have investigated the approach, hoping to find potent combinations against a range of viruses, such as influenza, H.I.V. and Ebola.

But scientists had little to show for all that research. It was easy enough to demonstrate that two vaccines may work well together in a mouse. But running full-blown clinical trials on a combination of vaccines is a tall order.

“For a single company to develop two parallel arms of a vaccine is twice the work and twice the cost,” Dr. Wheatley said.

Some of the early successes for heterologous prime-boosts came in the search for vaccines for Ebola. Many researchers focused their efforts on presenting the immune system with a protein found on the surface of the Ebola virus.

The gene for that protein was inserted into a different, harmless virus. When people received an injection of the vaccine, the harmless virus entered their cells; the cells then read the instructions in the Ebola gene and mass-produced Ebola’s surface protein. The immune system encountered the Ebola protein and made antibodies against it. And those antibodies protected the vaccinated people if they became infected with a full-blown Ebola virus.

When the Covid-19 pandemic began last year, the Gamaleya researchers used a similar strategy to create vaccines against the new coronavirus. The first dose used the same adenovirus as in their Ebola vaccine, called Ad5. The second dose contained a different human adenovirus, Ad26. The researches inserted a gene into both viruses for the protein on the surface of the coronavirus, called spike.

The Gamaleya and AstraZeneca teams want to see how well their vaccines work together. They have registered a pair of clinical trials in which volunteers will receive a dose of AstraZeneca’s ChAdOx1 and another of Sputnik V’s Ad26.

A spokesman for AstraZeneca said that one trial in Azerbaijan is underway, and a second, in Russia, is still under review by the country’s ministry of health.

Dr. Jakob Cramer, the head of clinical development at CEPI, a vaccine development organization, said that vaccines using viral vectors were not the only kind that might benefit from mixing. In fact, certain combinations might provoke a different, more effective immune response than a single type of vaccine. “Immunologically, there are several arguments in favor of exploring heterologous priming,” Dr. Kramer said.

Another kind of Covid-19 vaccine being tested contains the actual spike protein, rather than genetic instructions for it. Some of the vaccines contain the entire protein; others contain just a fragment of it. Currently, there are 29 protein-based vaccines for Covid-19 in clinical trials, although none have been authorized yet.

Dr. Wheatley and his colleagues have been testing protein-based vaccines in mice. They injected the full spike protein into the animals as a first dose. For the second dose, they injected only the tip of the spike, a region known as the receptor-binding domain, or R.B.D.

The researchers suspect that the first dose produces a broad range of antibodies that can stick to spots along the length of the spike protein, and that the second dose delivers a big supply of particularly potent antibodies to the tip of the spike. Together, the assortment of antibodies does a better job of stopping the coronavirus.

“You’re able to basically take that initial immunity that was elicited to that spike vaccine, and then really focus it down onto that R.B.D.,” Dr. Wheatley said.

Other combinations of vaccines may bring benefits of their own. Some vaccines, especially protein-based ones, do a good job of generating antibodies. Others, such as viral vectors, are better at training immune cells. A viral vector followed by a protein boost might offer the best of both worlds.

John Moore, a virologist at Weill Cornell Medicine, cautioned that there was no guarantee that clinical trials would reveal a benefit to mixing vaccines. In the search for an H.I.V. vaccine, researchers tried combining viral vectors and protein boost without success, he noted. Still, Dr. Moore said, the story might turn out differently for coronavirus vaccines.

“I’d like to see these studies done,” he said. “Doing it in the Covid space is completely rational, but may not be necessary.”

Pfizer-BioNTech’s vaccine uses a fundamentally different technology to produce spike proteins in the body. It contains tiny bubbles with genetic molecules called RNA. Once the bubbles fuse to cells, the cells use the RNA to make spike proteins.

One group of volunteers is receiving a Pfizer-BioNTech shot followed by AstraZeneca, while another will receive them in the reverse order. The other volunteers are receiving the standard two-dose version of the vaccines.

Later this month, the Oxford team will draw blood from the volunteers, examining their antibodies and immune cells to see whether the heterologous prime-boost creates an immune response roughly as strong as two doses of each of the authorized vaccines.

If more vaccines are authorized in Britain, the Com-Cov team may add them to the trial. Dr. Matthew Snape, who is leading the Com-COV trial, hopes it will be useful not just to his own country but to others that will be trying to vaccinate their citizens over the next few years.

“It might be that actually this flexibility becomes essential in the future,” he said.

Dr. Cramer said CEPI is planning to support additional heterologous prime-boost studies. There are plenty of possible studies to run. Worldwide, 13 vaccines are now in use against Covid-19, with 67 more in clinical trials.

“In the current situation, we have a quite a luxurious position of having so many advanced, effective vaccines,” Dr. Wheatley said.

As the number of authorized vaccines grows, the possible combinations in which they can be used will explode. Recently, researchers at China’s National Institutes for Food and Drug Control scaled up their research on heterologous prime-boosts by trying out four different vaccines that have either been authorized in China or are in late-stage clinical trials there — vaccines based on adenoviruses, proteins, RNA and coronaviruses that have been inactivated with chemicals.

Whether scientists carry out more experiments on other vaccines will depend on the willingness of the vaccine manufacturers. “You’re requiring quite large pharmaceutical companies to play nice together,” Dr. Wheatley said.

Dr. Bernard Moss, a virologist at the National Institute of Allergy and Infectious Diseases, suspects that a number of companies will be willing to let their vaccines be tested in combinations. “It’s always better to be a part of something that is going to be used,” he said, “than to wholly own something that isn’t.”