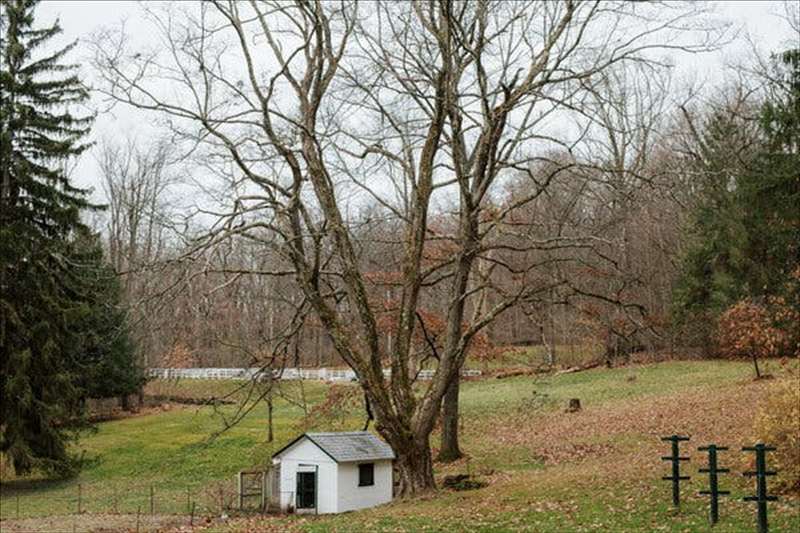 A majestic tree is fading fast. For the people who loved it, it’s like losing a family member.

Hoffstot is a freelance writer living on a farm in western Pennsylvania.

Standing under the old sugar maple, I want to sing a hymn. Kneel down and pray. Its tall branches tower above me like flying buttresses, its wide canopy is a sanctuary. It is my favorite tree on the farm.

The maple lives at the bottom of a hill where our children used to ride sleds in winter and jump into colorful leaf piles in autumn. Sometime, long before we arrived at our western Pennsylvania farm 34 years ago, the main trunk split into four. I remember our son climbing into the hollow that formed, where ferns now grow. We hung maple samaras, those winged seeds like helicopters, on our noses. The maple’s gnarly roots protrude out of the ground like those you’d see illustrated in “Alice in Wonderland.”

The old sugar maple sits next to the spring and the spring house, which we turned into a chicken coop — good and bad, I’ve observed, for while the maple’s maze of branches offers the chickens some protection, it also offers multiple perches for owls and hawks to plan attacks. Fox, raccoon, fisher and opossum circle the tree furtively, scouting out their next meal. Snakes and mice do, too. Squirrels, which presumably call the maple home, race to and fro, gathering nuts for their winter larder.

Bird life fills the tree. In spring, the tree erupts with a dawn chorus of migrating birds and, in summer, the tiny Carolina wren belts out its glorious song. After the birds have flown south, I look up to see a multitude of nests. One, very high up, might be that of a Baltimore oriole, which I love because of the way their nests hang like sporrans.

Today when I collect eggs, though, I worry a branch will hit me on the head. I’m concerned for the chickens, too, wise as they are to impending danger. I have heard them squawk and seen them race away from the cracking branches before they tumble.

It faded slowly at first, but last summer it began to go fast, its lichen-covered limbs snapping and falling to the ground, the gray bark covered with dark green moss. It has far fewer leaves. A crack runs up the middle. More plants grow in the tree’s crevices: purple blackberry canes, spiky grasses and red-tinged euonymus. For the first time, I see three woodpecker holes, so beautifully aligned they look like Orion’s belt.

I do not know why the tree is dying, so I do some research. Maples are prone to many diseases, such as anthracnose, verticillium wilt, and powdery mildew, but I am still confused, so I call Brian Crooks, a forester with the Western Pennsylvania Conservancy. The giveaway, he says, are the small honey-colored mushrooms at the tree’s base, which indicate the maple has a fungus: Armillaria root rot.

I don’t know how large ours is, but I do worry about it encroaching on a nearby tree, a large red oak that is a favorite of my husband’s.

I wonder if the maple doesn’t like our new western Pennsylvania weather: the extreme heat, the drought, then the microbursts of rain and wind and the flash floods. When our floods come now, the water runs down the hill so fast that the maple sits in the middle of a pond, a stream running through it. I do know from maple sugaring with my friend and his 89-year-old uncle that changing climatic conditions are making sugaring more difficult. For the sap to run in February or March, the days must be warm and the nights cold. The timing is less predictable now. But I am not a scientist, so I ask Crooks.

He tells me that while Armillaria fungus is not new, western Pennsylvania is becoming more favorable for fungal development. Sudden periods of wet and then dry increase stress on the tree and allow fungi to more easily infiltrate a tree’s root system. Individual trees and entire forests are becoming less resilient against pests and disease because of climate change.

For our old maple, the Armillaria fungus is a death knell. There is no way for the tree to recover. “Once it colonizes the root system and displays visible mushrooms, the fungus is well progressed within the tree,” Crooks says. “Sorry to have to share bad news.”

“Standing people” is what the Cherokee called trees.

Now when I close the chicken coop at night, I stand in the altar and give a eulogy. I say how grateful I am to have spent a third of a century under its gaze. I thank the tree for its contribution to this farm, for standing by my family in good times and bad. I whisper a prayer for whatever is the afterlife of trees, and hum a favorite hymn, “Ein Feste Burg,” singing a sad goodbye to what was, indeed, a mighty fortress.