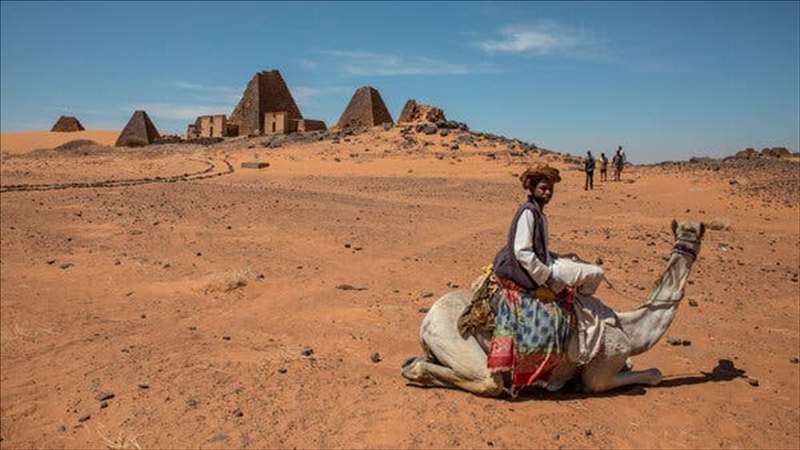 Desecrated by plunderers, threatened by floodwaters and largely overshadowed by their Egyptian counterparts, Sudan’s ancient archaeological sites may finally be poised to receive broader recognition.

The site was nearly deserted. A few locals were tidying up after recent restoration work, and young camel drivers were out looking for clients. In the midday heat, the bright glow of the desert helped focus my attention on the pyramids themselves.

Situated on the east bank of the Nile, some 150 miles by car northeast of Sudan’s capital, Khartoum, the Meroe pyramids — around 200 in total, many of them in ruins — seemed to be in perfect harmony with the surrounding landscape, as if the wind had smoothed their edges to accommodate them among the dunes.

I traveled to Sudan in February and March of 2020, just a few days before pandemic lockdowns fell into place in my home country of Italy.

I was attracted to a nation that had managed — through the strength, creativity and determination of its people — to free itself from a dictatorship. And I was keen to meet and photograph the protagonists and young actors of this historic moment.

During my visit, Amr Abdallah and Tawdia Abdalaziz, two young Sudanese doctors in their 20s, led me through the streets of Khartoum to see the symbolic sites of the revolution, showing me mile after mile of public art — graffiti, murals, verses — that marked the sites of the protests.

For me, as an Italian, it equated to never having had the chance to visit the Colosseum in Rome.

Compared to the monumental pyramids in Giza, Egypt, the structures at Meroe are significantly smaller — from around 30 to 100 feet tall, against the 455-foot-tall Great Pyramid — and their slopes steeper. As in Egypt, though, the pyramids serve as royal burial sites.

With one hand on the steering wheel and the other holding his phone, Nour, our driver, was accustomed to bringing visitors to Meroe. Still, in his four-wheel-drive Toyota, we sometimes lost our way as we moved from one site to another, through vast stretches of deserts.

Local tour guides at the entrance to Meroe invited us to take camel rides, eager to remind us that this is a time-tested, if often neglected, tourist site.

At the Naqa archaeological site, some 50 miles southwest of Meroe, the atmosphere was very different.

We walked alone among the buildings, including a temple devoted to Apedemak, a lion-headed warrior god worshiped in Nubia. On the opposite side of the site, ram-shaped sculptures accompanied us to the entrance of the Amun temple, built around the first century A.D. and considered one the most important archaeological structures and tourist attractions in Sudan.

A stone’s throw from the temple of Amun, a golden sunset illuminated a small flock of sheep, which were followed by a young shepherd. Dusk would soon settle in. The drive back to Khartoum was a long one, and our driver warned me to speed up.

Back in Khartoum, where the Nile River’s two main tributaries — the White Nile and the Blue Nile — meet, Dr. Amr and Dr. Tawdia, along with their friends, gathered to celebrate a birthday.

Amid the songs and dances, Dr. Tawdia approached me to ask what I thought of her country’s archaeological beauties — and to discuss Sudan’s future.

“The Sudanese people have the right to reclaim their country,” she said, adding that she and her friends long for a democratic society that can be open and accessible to everyone.

And, she added, they want a country that can showcase its treasures to its visitors and its people.