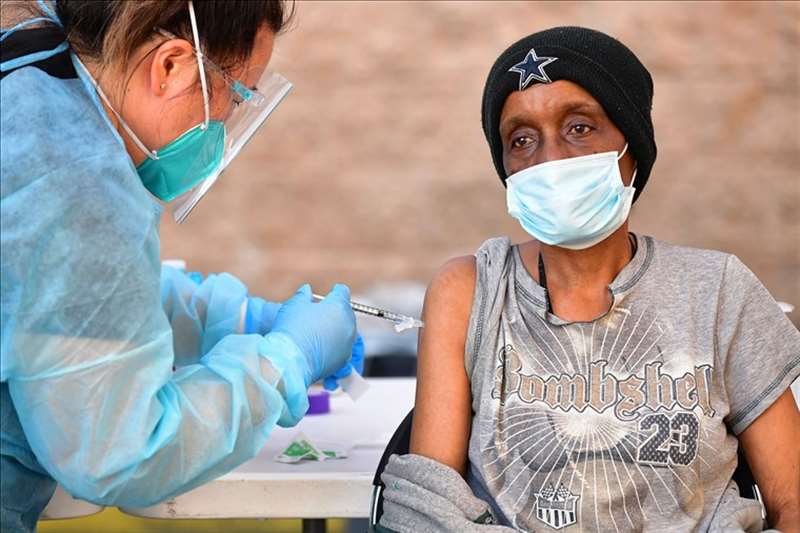 When it came time for residents and staff at the New York Avenue homeless shelter in northeast Washington, D.C., to receive their first doses of Moderna’s Covid-19 vaccine, David Durham, who’s lived at the men’s shelter for three years, was scared.

Like many at the shelter, he’d been bombarded by vaccine misinformation: Neighborhood talk and rumors turned into elaborate conspiracy theories, many of which played into the mistrust that homeless people already have of government services.

“I’ve heard so many conspiracy theories, like they’re putting a chip in you, that they’re going to inject some sort of liquid in you, that you’re going to be a guinea pig,” said Durham, a 34-year-old D.C. native. “But I said, ‘You know what, I have to take it upon myself to lead by example.’”

Across the country, many cities and major urban centers have begun the work of vaccinating homeless individuals housed within their shelter systems, but few municipalities have ventured into the streets where the matter is compounded by mistrust, logistical hurdles and limited resources.

So far, their methods have been as varied as their preparedness.

In Washington, city officials have implemented a multi-agency strategy for vaccinating homeless individuals regardless of age or condition, but have mostly refrained from vaccinating those who are living on the street. Durham was one of the first within his shelter to receive the vaccine, and then became a peer educator, one of about two dozen currently or previously homeless individuals tasked by the city with educating other homeless individuals on the safety and efficacy of the different vaccines.

When asked if the program has been a success, Durham admitted it’s been difficult to convince people when many have already made up their minds. After all, Durham said, only about half of the peer educators in his program took the vaccine because the other half was too skeptical.

“Reaching people at a fixed point, like a homeless shelter, is much more feasible than doing street outreach,” Kachur said, adding that both the Moderna and Pfizer-BioNTech vaccines have kept many cities from doing substantial outreach, as they each require storage in freezing temperatures, second doses three to four weeks after the first, and may spoil if not used within a certain time window.

In Los Angeles, grassroots organizations have led the way in vaccinating those on the streets based on age eligibility and other conditions, as city officials decide on a more coordinated approach. Los Angeles Christian Health Centers has been administering the Moderna vaccine to street homeless individuals for nearly a month and now must track down patients to administer second doses — an effort fraught with obstacles.

In New York City, some 4,300 residents and staff within the city’s expansive system of homeless shelters have received a vaccine, according to a spokesperson for the Department of Homeless Services. Prior to the Johnson & Johnson vaccine, no existing vaccine has been able to be delivered in a mobile way, and the city hasn’t yet deployed outreach teams with the specified purpose of vaccinating unsheltered individuals, the spokesperson said.

Chicago has vaccinated roughly 2,000 residents and staff within its shelter system, while outreach teams have been able to vaccinate only about 125 unsheltered individuals living in encampments, a city spokesperson said. In Boston, 57 sheltered individuals have received their first dose, and street outreach teams hope to vaccinate the unsheltered in the coming days, a spokesperson for the city’s Public Health Commission told NBC News.

Kachur said he thinks the Johnson & Johnson vaccine is a game changer and will finally allow for meaningful street outreach.

For Laura Zeilinger, the director of the Department of Human Services in Washington, the situation couldn’t be more pressing.

“People who are experiencing homelessness tend to have many risk factors due to their age and other health conditions that make them a particular risk for extremely poor health outcomes, should they contract COVID,” Zeilinger said.

Her department, in partnership with local health care providers, have used pop-up clinics, peer educator programs and social media campaigns to vaccinate over 900 sheltered individuals. They’re preparing for the Johnson & Johnson vaccine, which may allow them to begin vaccinating those living on the streets. Peer educators like Durham are beginning the work of courting this group, so that when the time’s ready, mistrust won’t be as much of an obstacle.

Like many West Coast cities, Portland, Oregon, won’t begin vaccinating the homeless until further phases open up, but can do so based on age or condition. A spokesperson for Multnomah County said “the County has sent vaccine teams to our physical distancing shelter to provide vaccines to some people who qualify because of age or medical condition.”

As is the case with Los Angeles and other Californian cities, San Francisco is waiting on guidance from the state to begin widespread vaccinations of its large homeless population as vaccine shortages hamper rollout and prioritization phases shift.

Homeless people were originally supposed to be vaccinated along with emergency workers, child care providers, teachers and workers in the food sectors but have since been removed by the state with no word as to when they’ll be added to other phases, a spokesperson for San Francisco’s Covid Command Center said. In the meantime, the city has vaccinated homeless who are eligible per state guidelines at the Zuckerberg San Francisco General Hospital.

In cities like Dallas, officials are beginning to make mention of the Johnson & Johnson vaccine being used specifically for the homeless.

Public health experts like Kachur are hopeful that the Johnson & Johnson vaccine, if prioritized for the homeless, will greatly alleviate many of the logistical challenges cities have faced and make meaningful vaccination of street homeless individuals a reality.

Kachur also applauds efforts, like Washington’s peer educator program, to quell the rampant mistrust that exists among the homeless. He thinks it’s necessary to prioritize this population in whatever way possible if the country is ever to reach herd immunity.