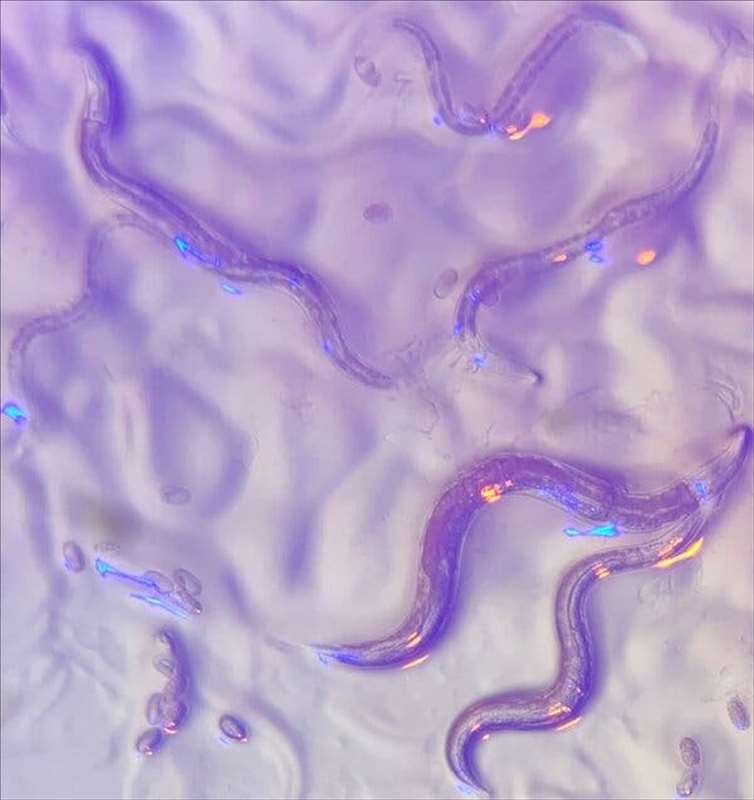 Eyeless roundworms may have hacked other cellular warning systems to give themselves a form of color vision.

Given that roundworms do not have eyes, cells that obviously detect light or even any of the known genes for light-sensitive proteins, this seemed a bit far-fetched. It wasn’t difficult to set up an experiment to test the hypothesis, though: Dr. Ghosh, who is now a postdoctoral researcher at the Massachusetts Institute of Technology, put some worms on patches of P. aeruginosa. Then he turned the lights off.

To the surprise of his adviser, Michael Nitabach, the worms’ flight from the bacteria was significantly slower in the dark, as though not being able to see kept the roundworms from realizing they were in danger.

“When he showed me the results of the first experiments, I was shocked,” said Dr. Nitabach, who studies the molecular basis of neural circuits that guide behavior at Yale School of Medicine.

How they accomplish this perceptual feat remains a mystery, but the findings hint that the worms may have hacked other cellular warning systems to gain a kind of color vision.

But using color to steer their foraging behavior — that was a new idea. To see if changing the bacteria’s color would have an effect, Dr. Ghosh next put worms on a mutated strain of P. aeruginosa that was beige rather than blue.

This time, the worms didn’t move away any faster whether it was light or dark in the lab. That suggested that they were lacking extra cues from the bacteria’s color.

He also put the blue pigment — a toxin called pyocyanin — on E. coli, a common food source for the worms. But rather than feasting on the bacteria, he found that they fled rapidly from the microbes when they were well lighted.

Other experiments established that while the worms might sense something unpleasant about the toxin without the presence of the color, they really got moving when blue was visible.

Trying to understand how the eyeless creatures were sensing this, the researchers compared the genomes of worms that responded strongly to color with those that ignored it. They were able to pinpoint several regions of the genomes that correlated with the behavior.

Then they engineered worms with mutations in genes in those regions to see if the creatures’ color detection abilities were affected. Indeed, they uncovered two genes, jkk-1 and lec-3, that seemed to affect the worms’ behavior if mutated.

It is still unknown how these two genes, which code for proteins with no obvious connection to vision, connect to the worms’ enigmatic talent. They may be part of a long bucket brigade of proteins, passing on the message from one to the next that something blue is in the area, until it reaches the worm’s neurons and gets the creature moving.

The proteins have been flagged in the past, however, in cellular responses to stressors such as ultraviolet light in human and mouse cells, Dr. Ghosh says.

If researchers can uncover just how the roundworms are detecting color, they will have new insight into a surprising behavior and a handle on how organisms without a traditional visual system may still be able to perceive visible light. It may also be that an evolutionarily ancient way of avoiding stressors has been tuned to the color blue.