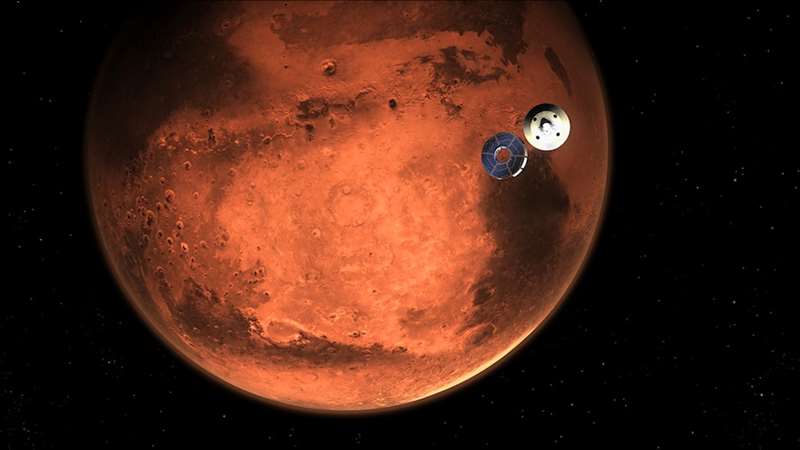 It’s a multi-step process and engineers will receive alerts regarding key milestones on an 11-minute-and-22-second delay.

First, the spacecraft that has been flying Perseverance and NASA’s Ingenuity Mars Helicopter will separate at around 3:38 p.m. ET and then enter the planet’s atmosphere at 3:48 p.m. ET.

About 20 seconds later, the heat shield will detach from the entry capsule, allowing Perseverance to use its radar to measure the distance from the ground and its Terrain-Relative Navigation.

The function uses images of the landing site to help the rover accurately determine where it’s headed and the safest point to reach — even on terrain previously inaccessible to engineers.

Next, the back shell of the capsule that is fastened to the parachute will separate from the rover and its “jetpack” at 3:54 p.m. and the jetpack will use retrorockets to help Perseverance slow down and reach its landing site.

In order to carry out its assignment, Perseverance is carrying seven instruments to utilize in unprecedented experiments and test new technology.

The Planetary Instrument for X-ray Lithochemistry — or PIXL — serves as a fluorescence spectrometer and high-resolution imager to detect and map fine-scale elemental composition of the Martian surface.

The Scanning Habitable Environments with Raman & Luminescence for Organics and Chemicals (SHERLOC) spectrometer uses an ultraviolet laser to map mineralogy and organic compounds.

Lastly, the Radar Imager for Mars’ Subsurface Experiment (RIMFAX) is a radar that provides a centimeter-scale resolution of the geologic structure of the subsurface.