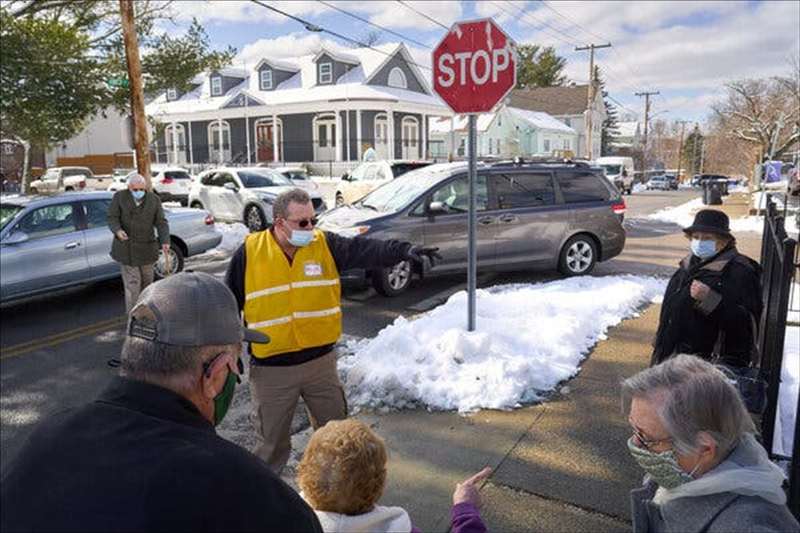 A dense population of vulnerable citizens set the stage for a frightening epidemic.

PROVIDENCE, R.I. — The numbers began ticking up in September. After a quiet summer, doctors at Rhode Island Hospital began seeing one or two patients with Covid-19 on each shift — and soon three. Then four.

Cases climbed steadily until early December, when Rhode Island earned the dubious distinction of having more cases and deaths per 100,000 people than any other state in the country. The case rate still puts it among the top five states.

Where did this tightly knit state go wrong? Former Gov. Gina Raimondo’s “pauses” on economic activity were short-lived and partial, leaving open indoor dining, shopping malls and bowling alleys. But the shutdowns were no patchier than those in many other states.

Until late summer, she was lauded for reining in the virus. Even now, few residents blame her for the bleak numbers. (Ms. Raimondo was sworn in as the secretary of commerce on Wednesday night.)

Experts point instead to myriad other factors, all of which have played out elsewhere in the country but converged into a bigger crisis here.

The fall chill sent people indoors, where risk from the virus is highest, and the holidays brought people together. Rhode Island is tiny — you can traverse it in 45 minutes. But crammed into that smallish area are a million people, for a population density second only to that of New Jersey. If everyone in the world is connected by six degrees of separation, Rhode Islanders seem to be connected by maybe two.

Central Falls, the epicenter of Rhode Island’s epidemic, has a density of 16,000 people per square mile, almost twice that of Providence. “Just imagine, 16,000 people per square mile — I mean, that’s amazing,” said Dr. Pablo Rodriguez, a member of the government committee that guides Covid vaccine distribution in Rhode Island. “It doesn’t take much for the spark to create an outbreak.”

Apart from its density, Rhode Island has a high percentage of elderly residents in nursing homes, accounting for the bulk of deaths. Packed into the state are multiple urban areas — Central Falls, Pawtucket, Providence — where language barriers, mistrust and jobs have left immigrant families in multigenerational homes particularly vulnerable. The state is also home to multiple colleges that set off chains of infection in the early fall.

For months, the hospitals in Rhode Island were understaffed and overwhelmed. Doctors and nurses were trying to cope with rising caseloads, often without the protective equipment they needed, with constantly shifting guidelines and with their own resilience stretched to the limit.

Dr. Megan Ranney, a researcher and public health advocate, is also an emergency room physician at Rhode Island Hospital who has witnessed the full scope of the state’s crisis firsthand. What she saw unfold over a single shift offers a window into what happened.

One day in late December, as the crisis reached new heights, Dr. Ranney girded for a long eight-hour shift. The sores behind her ears, where her glasses and the straps of the N95 and surgical masks dug in, still had not healed. But how could she complain, Dr. Ranney said, when her medical residents “eat, sleep, breathe Covid” five days a week?

The patients had it worse, she knew. Anxious and isolated, they became even more discomfited by the masked and unrecognizable doctors and nurses rushing around them. During Dr. Ranney’s shift the prior week, she had seen a broad spectrum: elderly people on a downward spiral, otherwise healthy young Latino men, Cape Verdean immigrants with limited English comprehension.

These demographics are partly what made Rhode Island particularly susceptible, said Dr. Ashish Jha, dean of the School of Public Health at Brown University in Providence: “Certainly in New England, it is the poorest state — so a lot of poverty, and a lot of multigenerational poverty.”

In the days before her shift, Dr. Ranney had been working in a part of the hospital intended to deal with non-Covid cases. But even people with other ailments, like ankle fractures, turned out to be positive for the virus, she found.

“I never know from day to day how bad the surge will be,” she said. “I’ve just got to plow through it.”

It turned out to be an extraordinarily busy day. “The E.R. is full, the hospital is full, the intensive care unit is full,” Dr. Ranney said. “All of our units are moving as quickly as they can, but the patients keep coming in.”

Every time she took off masks during a shift, she ran the risk of contaminating herself. She had had four cups of coffee before this shift, and nothing since.

The average age of the patients that night was about 70. One elderly woman who had trouble breathing could not isolate because she lived with her children and grandchildren. At any rate, she arrived at the hospital 10 days into her illness, too late for isolation to matter.

Rhode Island’s epidemic has been disastrous for immigrant families in multigenerational households. “How do you isolate from someone when you have one bathroom?” Dr. Ranney said.

It’s a problem throughout this diverse state. When Djini Tavares, 60, became infected in July, she was prepared to spend about $120 a night at a hotel — a sum many in her Cape Verdean community cannot afford — to isolate from her vulnerable 86-year-old father.

Even before the pandemic, Ms. Tavares was fastidious about hygiene, keeping mounds of wipes and cleaning supplies in the house at all times. She could not imagine where she had picked up the virus. The loss of her godmother and a friend to Covid-19 had shaken her.

Cape Verdeans are a close-knit community, and not being able to mourn the dead has been painful, Ms. Tavares said: “Culturally, I think it’s causing us to hurt even more.”

On her shift, Dr. Ranney encountered Covid-19 patients who had blood clots or heart problems, or who still needed oxygen weeks after their diagnosis. Many patients had been very careful — or said they had — but were infected after a family member brought the virus into the household.

The story is told too often in Rhode Island. Abby Burchfield, 58, lost her mother and stepfather to Covid-19 within days of each other at an assisted living center in New Jersey in April. Devastated and afraid, she and her family stayed away from restaurants, washed their hands often, and tried to wear masks everywhere. It wasn’t enough.

Ms. Burchfield’s younger daughter, Lily, 21, became infected at her college in Virginia in August and was hospitalized. Then, in late October, her husband, Jimmy, 58, caught the virus from a co-worker who was infected but did not wear a mask.

Despite Ms. Burchfield’s best efforts she, too, was infected. She was hospitalized after she collapsed suddenly in the family kitchen. She recovered, but her husband, who was also admitted to the hospital, still has no taste, a limited sense of smell, and continuing fatigue.

Workplace exposures have especially hurt the Latino and Cape Verdean community, many of whom hold jobs that cannot be done from home. But in state surveys, it also became obvious that people still were holding get-togethers of 15 to 20 people even as the virus spread, said Dr. James McDonald, medical director of the Covid-19 unit at the Rhode Island Department of Health.

“People weren’t willing to live differently during the pandemic,” he said.

Dr. Ranney said there were several such cases in the emergency room that night.

“It’s frustrating to see patients come in from car crashes when they were not wearing a seatbelt, or to see patients with a firearm injury because the firearm wasn’t stored safely,” she said. “It’s like that to see folks with Covid.”

Some nights in emergency medicine, the diagnoses and treatments are immediately obvious.

But on this shift, Dr. Ranney said, “there was very, very little that was straightforward or smooth.” A number of patients with substance abuse problems appeared, as well as people with mental illness who had become a danger to themselves. And “we’re seeing a lot of people who are just lonely,” she said.

Dr. Ranney would get a respite, but many medical residents and nurses in Rhode Island were already burning out. Some felt that hospital administrators had not protected them.

Early in the pandemic, most health care workers in Rhode Island, as in other parts of the country, did not have N95 masks. The masks are single-use, but when the nurses received an N95 each, they were asked to place them in paper bags at the end of their shift and put them back on again the next day.

“They stunk, they were slimy, they were disgusting. They made your face break out,” said a nurse at Rhode Island Hospital, who spoke on condition of anonymity because the hospital had instructed employees not to speak to the news media.

If a strap broke, the mask would be returned with new straps stapled on. “The staples would dig into your face,” the nurse said.

Many nurses got just 40 hours of sick time a year, which roughly translated to three 12-hour shifts; a fourth day out might earn a reprimand.

The rules for patients don’t always accord with the science, said one nurse at Rhode Island Hospital. At first, the hospital did not allow anybody up from the E.R. until test results were back. But as the first surge ebbed, the rules became lax.

Patients were sent up with pending test results, potentially exposing other patients as well as the nurses who cared for them. After treating one such patient, at least nine nurses tested positive for the virus, the nurse said.

The policy at most hospitals in Rhode Island now is to have health care workers wear N95 respirators or similar reusable masks at all times, and to test anyone suspected of having Covid-19. But that does not account for patients who might be asymptomatic and who come in for other ailments.

Rhode Island has adopted one unusual approach: Officials are distributing vaccines to anyone who will take them in Central Falls, regardless of age. It’s a strategy that few other jurisdictions have tried.

“We decided to do that because of the horrific toll of the pandemic in those communities,” said Dr. Rodriguez, the vaccine committee member. Twenty percent of the adult residents have received at least one dose at local clinics, not including those who may have been immunized at work or elsewhere.

The state’s plan to immunize those at highest risk by age and geography, he added, “will put out the fire where it is burning the most intensely.”

In recent weeks, the number of cases in Rhode Island have fallen, as they have in the rest of the country. And fewer health care workers are getting sick because they have been immunized, so hospital shifts are better than they used to be, Dr. Ranney said.

But cases in the state are still the third highest per capita in the country. And doctors are continuing to see patients who have so-called long Covid, she said: “The trouble is that once patients get admitted, they don’t leave.”