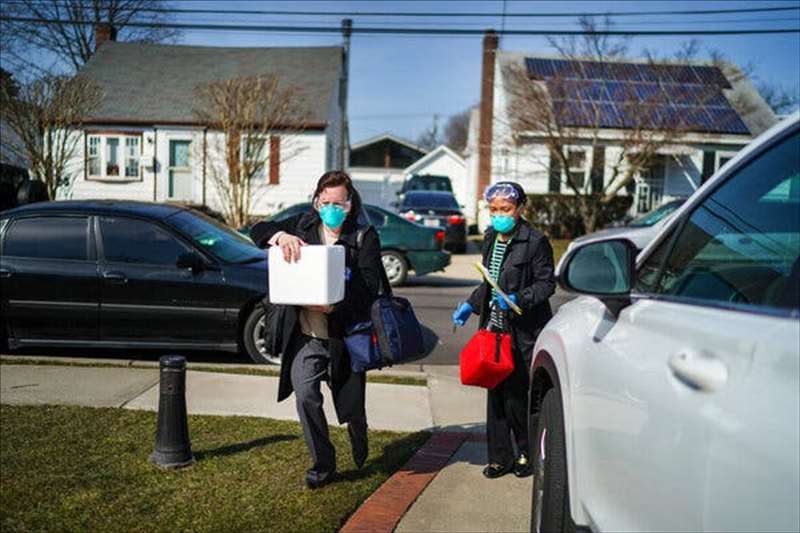 Millions of older Americans, chronically ill and trapped at home, pose a big challenge to inoculation efforts. Doctors are on it.

One vial of vaccine. Five elderly homebound patients. Six hours to get to them before the vaccine spoiled.

Doctors at Northwell Health, the largest heath care provider in New York State, set out last week to solve one of the most vexing medical and logistical challenges of the campaign to get Americans vaccinated against the coronavirus: how to inoculate millions of seniors who live at home and are too frail or disabled to go to a clinic or queue up at a vaccination site.

Members of the network’s house calls program had prepared for their first run. A supply of the new Johnson & Johnson coronavirus vaccine made the operation easier, because one visit would do the trick.

A medical team mapped out a route that would include a cluster of homes not too far from one another, starting with older patients in underserved communities hard hit by the virus. The doctors contacted the patients well ahead of the visits, knowing they’d need plenty of time to consult with their families about whether to get vaccinated. Only a few turned them down; most were enthusiastic.

Before the doctors hit the road, they screened patients on the phone to make sure they were relatively healthy. Any unexpected problems had to be avoided. The doctors were racing against the clock: Once they punctured the seal on the vial and drew the first dose, they had only six hours to use the remaining vaccine, or they would have to throw it out.

“We’ll be running a tight ship, I think, but very compassionately,” said Dr. Karen Abrashkin, the program’s medical director, as a bulky, high-tech cooler — actually, a car refrigerator — was loaded onto the back seat of her car last Wednesday and plugged in to a cigarette lighter.

Inside was a vial the size of a thimble, containing five doses of vaccine. “It’s a historic moment,” she said.

Her first stop was a twofer, the home of a married couple in Hempstead, N.Y. Hector Hernandez, 81, a retired window cleaner who used to scrub high-rise buildings in Manhattan, and his wife, Irma, 80, a retired seamstress, had decided to get vaccinated, after sorting through a potpourri of conflicting advice from friends and family.

“First I was skeptical — is it safe?” Mr. Hernandez said. Two friends had warned him to be careful because the vaccine was new. But Mrs. Hernandez’s cardiologist assured the couple it was safe, and another friend seemed confident that getting the vaccine was better than not getting it.

The couple’s granddaughters, including one who was laid up with Covid-19 for two weeks, advised waiting to see if the vaccine had long-term side effects. In the end, Mr. Hernandez said, their daughter persuaded them to get vaccinated.

“She called and said, ‘You have to get it done, because if you ever get Covid, it can be really bad — you can’t breathe,’” Mr. Hernandez said.

As Dr. Abrashkin punctured the vial’s seal with a syringe, Lorraine Richardson, a social worker accompanying her, jotted down the time: 10:11 a.m. The two would monitor the Hernandezes for side effects for 15 minutes, and then hit the road. They had until 4:11 p.m. to reach three more patients.

A vast majority of Americans over 65, however, do not live in nursing homes or assisted living facilities, but in the community, where it’s more challenging to reach them. There is no central registry of the homebound elderly. Geographically dispersed and isolated, they are often difficult to find.

“This could be the next big hurdle for the older population,” said Tricia Neuman, a senior vice president at the Kaiser Family Foundation. “So much of the vaccination rollout has been a patchwork at the state or local level, but this presents a whole different set of challenges.”

Vaccination rates among seniors have risen quickly, with at least 60 percent inoculated so far. But there is no system in place for reaching the homebound, Dr. Neuman noted: “Some people simply cannot get themselves to a vaccination site, so the challenge is getting the vaccine to them, where they live.”

On Monday, New York City announced that it was expanding efforts to go door to door vaccinating homebound seniors, with plans to reach at least 23,000 residents. The visiting doctors program at Mount Sinai in New York, which cares for 1,200 homebound residents, has vaccinated 185 patients and has been given the greenlight to vaccinate the seniors’ caregivers as well, according to Dr. Linda DeCherrie, the clinical director of the Mount Sinai at Home program.

Northwell’s house calls program, which cares for patients in Queens, Manhattan and Long Island, plans to vaccinate 100 patients a week over the next 10 weeks, a timetable that could be accelerated if nurses are allowed to carry rescue medications in case patients develop adverse reactions like anaphylactic shock.

While Dr. Abrashkin was administering vaccines on Long Island last week, Dr. Konstantinos Deligiannidis, a colleague, was vaccinating five elderly women in the Brentwood, N.Y., area over the course of four hours.

“They were so relieved,” he said. “They had all been worried — how could they get the vaccine since they couldn’t get out of the house?”

Dr. Abrashkin and Ms. Richardson visited — and vaccinated — two more elderly women on Wednesday before making their last stop at the sunny, plant-filled kitchen of Juanita Midgette, 73, a retired computer science and business teacher living with arthritis who counts Eddie Murphy among her past students. (Spoiler alert: He was a respectful student, she said, and she recommended his new movie, “Coming 2 America.”)

It was 12:31 p.m. when they knocked on the door. Ms. Midgette had heard mixed reviews about the coronavirus vaccine, and had been squabbling with her sister about it. But she had been unable to travel to her native North Carolina and visit with relatives since the pandemic hit, and she was hopeful the vaccine would give her the freedom to do so.

She believed in God, and in science. Ms. Midgette said her research into the vaccine led her to conclude that “the positivity greatly outweighs the negativity.”

“My research tells me they are doing the best with the data they have collected so far to save lives,” Ms. Midgette said.

“It reminds me of when we had the first computers, and they were so large, but we started teaching with them,” she said. “Now they fit in the palm of your hand. Had they waited until they got something smaller, the world would look different than it does today.”

After getting the shot, she asked Dr. Abrashkin: “Is it all over?”

“It’s hard to be isolated,” Ms. Midgette said. “I’m looking forward to being able to mingle again, in some way, somehow.”