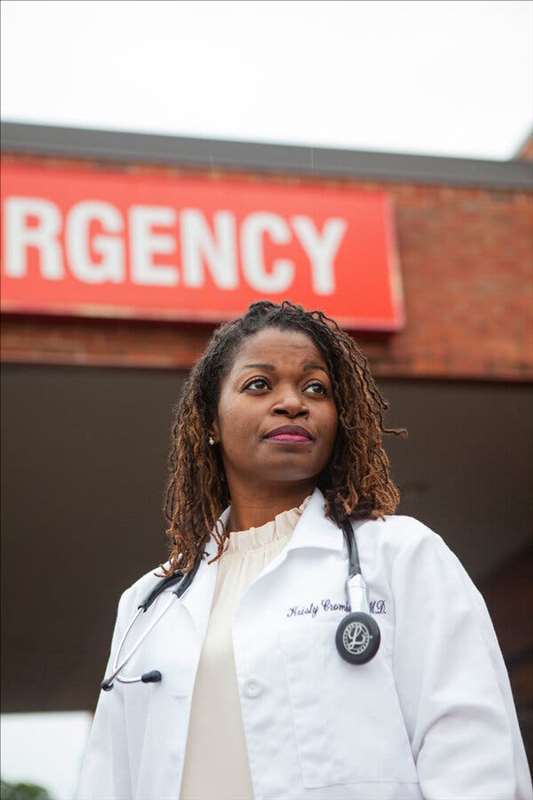 Dr. Kristy Cromblin knew that as the descendant of Alabama sharecroppers and the first person in her family to go to college, making it to medical school might seem like an improbable dream. Her parents watched in proud disbelief as she inched closer to that goal, enrolling in a medical school in Barbados and enlisting in the military with plans to serve one day as a flight surgeon.

Then came an unexpected hurdle: A contentious divorce led Dr. Cromblin to take seven years away from medical school to care for her two sons. In 2012, she returned for her final year, excited to complete her exams and apply for residency, the final step in her training.

“There are times you question your worth,” Dr. Cromblin, 43, said. “You wonder if you’re useless. I’ve had to encourage myself over and over: I am worth it. I am useful. I am damn good.”

But Dr. William W. Pinsky, the chief executive of the Educational Commission for Foreign Medical Graduates, which credentials graduates of international medical schools, said residency directors who down-rank medical students from abroad were missing out on opportunities to diversify their programs.

“I understand program directors have to do what they have to do,” Dr. Pinsky said. “But if they put on a filter to leave out international graduates, they’re cheating themselves.”

Dr. Adaira Landry, an emergency physician in Boston, said of all the young doctors she had mentored, those who went unmatched were the most challenging to assist: “They want to be part of our health care system,” she said. “But they have this boulder blocking them.”

At some point, Dr. Saideh Farahmandnia lost count of the number of residency rejection emails she had received. Still, she could remember the poignant feeling of arriving in 2005 at Ross School of Medicine in Dominica, thinking she was “the luckiest person in the world.” She had grown up in a religious minority community in Iran in which access to higher education was restricted. When she passed her licensing exams, she ecstatically called her parents to tell them they had raised a doctor.

After medical school, she spent two years doing research with a cardiothoracic surgeon at Stanford, thinking it would make her residency applications more competitive. But she applied to 150 residency programs, from rural to urban community hospitals, and received 150 rejections. She kept applying every year until 2015, when her mother died suddenly and she took a break to grieve.

“You leave your family to follow your passion and promise you’re going to help the country that adopted you,” Dr. Farahmandnia, 41, said. “At the end, you’re left with $300,000 in student loans and a degree that took so much of your life and precious time with your mother.”

The average medical school debt for students graduating in 2019 was $201,490, according to the Association of American Medical Colleges. Students who match into residency positions soon advance and become attending physicians, making an average of nearly $200,000 a year. But unmatched students are left scrambling to find other areas of work that can help them repay their debts.

Dr. Douglas Medina, who graduated from Georgetown University School of Medicine in 2011 and has been unable to match, says he pays at least $220 each month in loans, though some are now paused. “Just a couple of weeks ago I tried to decide between student loans or a stroller for the baby that’s coming,” he said. “It’s not just our careers being ruined, it’s our families.”

Students graduating from American colleges choose to go to medical school abroad for many reasons. Some have test-taking anxiety and prefer to apply to schools that don’t rely on MCAT scores for admission; others are attracted by the warmth and adventure promised by schools based in the Caribbean, which tend to have acceptance rates that are 10 times as high as those of American schools.

But many applicants, especially those coming from families unfamiliar with the intricacies of medical training, say they aren’t warned of the low match rates for international medical students.

“When I graduated, I got the cold smack of reality that all my credentials don’t matter, because you’re not getting past that match algorithm,” said Kyle, an international medical school graduate who asked that only his given name be used because he is reapplying for residency after an initial rejection.

Most frustrating, Kyle said, is being unable to work when he is aware of the urgent need for Black physicians like himself, especially in places like Atlanta, where he was raised. “It really hurts, because everyone thinks I should be a doctor,” he said. “They saw me pass my tests, they celebrated with me.”

Dr. Pinsky of the Educational Commission for Foreign Medical Graduates said that the organization was working with the World Directory of Medical Schools to ensure that international schools described their credentials in a more clear and honest way.

“Unfortunately, there are schools that perhaps exaggerate a bit on their websites in terms of the success of their graduating students,” Dr. Pinsky said.

Residency program directors said that in recent years they had increased their efforts to look at candidates holistically. “Straight A’s in college and perfect test scores does not a perfect applicant make,” said Dr. Susana Morales, an associate professor of clinical medicine at Weill Cornell Medicine in New York. “We’re interested in diversity of background, geographic diversity.”

Some international medical students struggling to match have looked for alternative pathways into medical work. Arkansas and Missouri are among the states that offer assistant physician licenses for people who have completed their licensing exams but have not completed residency. Unmatched doctors, eager to use their clinical skills to help in the pandemic, said that they had found the opportunity to serve as assistant physicians particularly meaningful during the crisis.

After she failed a first attempt at a licensing exam, then passed on her second try, Dr. Faarina Khan, 30, found herself shut out of the matching process. Over the past five years, she has spent more than $30,000 in residency application fees. But with an assistant physician license, she was able to join the Missouri Disaster Medical Assistance Team in the spring, helping out in medical facilities where staff members had tested positive for coronavirus.

“Hospitals need to realize that there are people in my position who could show up to work in the next hour if we’re called,” Dr. Khan said. “I didn’t go to medical school to sit on the sidelines.”

Legislation allowing for similar licensure is being considered in a handful of states. This position typically pays about $55,000 per year — much less than a physician might earn — which makes it challenging to pay off loans, but it allows for medical school graduates to keep up with their clinical training.

Dr. Cromblin, in Prattville, Ala., felt a similar urge to join the Covid-19 frontline in the spring. She had defaulted on a loan and had little in her bank account, but as soon as she received her stimulus check she bought a plane ticket to New York. She spent the month of April volunteering with the medical staff at Jamaica Medical Center in Queens.

She applied again for residency positions this year, although she says her sons have a hard time believing that their mother will ever become a practicing doctor.

“Every time I get a rejection letter, I go through my positive affirmations,” she said. “I say, ‘There’s a place for me, this just isn’t the one.’”