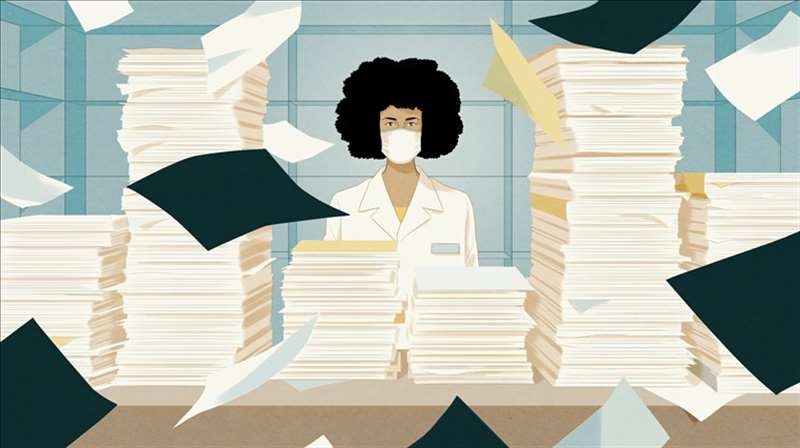 Pharmacists may be on the front line of Covid-19 vaccination distribution, but they feel increasingly like an afterthought when they try to get paid for it.

A common complaint among community pharmacists is that they are sapped physically, mentally and financially by hours of paperwork, piles of rejected claims and unceasing billing audits just to receive some level of payment for administering vaccines. And it’s a problem that could push some of these small businesses to the brink financially.

The vaccine may come free — paid for by the federal government — and administering it is fairly easy, but the work behind those shots is monumental, the reimbursement rates from insurers can be low and the effort to get paid is a major undertaking.

“It’s a shot in the arm for sure to know that you’re helping people,” said Antypas, who has worked 80- to 100-hour weeks running vaccination clinics while still operating a high-volume pharmacy. “But we’re certainly sacrificing our business, and it’s already difficult to be profitable. It’s just a drain on you.”

NBC News spoke to 10 community pharmacists in five states: Georgia, Pennsylvania, Florida, New York and Illinois. Seven obtained the vaccine despite the hurdles they faced, while three said the difficulty of securing a regular vaccine supply, billing issues and low reimbursement rates, particularly from private insurers and state Medicaid programs, discouraged them from participating in the nationwide effort.

All who had a vaccine supply emphasized that, despite the excessive paperwork and financial hardships, vaccinating their communities remained one of the most rewarding experiences of their lives.

Pharmacists’ vaccination efforts have already been huge: The Federal Retail Pharmacy Program has tapped more than 40,000 pharmacies nationwide and accounted for hundreds of thousands administered vaccines. A large and particularly effective portion of that number are independent pharmacies.

But at this point, they have mostly vaccinated people covered by Medicare, the federal insurance for those older than 65 that has set the standard for vaccine reimbursement rates. Still, even Medicare has had issues in providing payment because it still does not fully recognize pharmacists as providers that deliver medical services, drawing attention from lawmakers and trade groups.

Pharmacists said they were steeling themselves for further problems. As more states expand vaccination eligibility to those younger than 65, providers will treat a greater number of people with private health plans. While the vaccine is free for the patients by law and receiving the shot takes minutes, pharmacists say trying to get payment for delivering the service is hours of work unto itself — and sometimes not worth the effort.

Rep. Buddy Carter, R-Ga., who owned an independent pharmacy in his home state until last year, roundly criticized the billing nightmares pharmacists have undergone at the hands of private insurers during an Energy and Commerce Committee hearing on expanding access to vaccinations in late February.

He said during the hearing that he had received complaints that independent pharmacists were undergoing billing audits more frequently for the vaccine than they typically faced, creating hours of additional paperwork after a day of inoculations.

“Pharmacists are playing a vital role in the administration of this vaccine and they’re getting squeezed during this time when pharmacists and pharmacy personnel are literally risking their lives to provide health care services to patients,” Carter told NBC News. “It’s just despicable.”

Covid-19 has only exacerbated some common gripes and made community pharmacists’ frustrations clearer. Many are keeping a watchful eye on how insurers treat pharmacists through this period.

Anne Burns, the American Pharmacists Association’s vice president of professional affairs, noted it’s not yet fully known how widespread the reimbursement issue is. But she said insurers have overly complicated the system with various billing codes that cause reimbursements to be rejected more often. Still, Burns emphasized that her organization and other trade groups are tracking developments closely.

“There’s been variability in reimbursement and more rejected claims,” she said. “And at the end of the day, the important thing is that pharmacies get paid for delivering the vaccine and there’s not a significant lag time in getting there.”

The majority of Americans who have received the vaccination so far are over 65 and tend to be covered by Medicare with a rate set by a federal rule published in October. Doctors, nurses and pharmacists generally know the rate they’ll be paid and the billing process they will face. At the end of the day, they get about $45 for two shots, or a little over $28 for a single-dose vaccine.

But some state Medicaid programs, which cover Americans with limited incomes, don’t pay as much as the Medicare rate despite the high stakes of this vaccine — adding further variability to how much providers are paid.

While many states have ensured that their Medicaid programs pay the same as Medicare, NBC News reached out to eight state Medicaid programs that do not. Florida, Idaho, Minnesota, Kansas, Missouri, New York, Washington and Georgia all have reimbursement rates that are lower than the Medicare rate. Georgia and Kansas did not respond to requests for comment.

Florida, Idaho, New York and Missouri said they had not received complaints from providers about their reimbursement rates for Covid-19 vaccines and that they were paying the same amount they would for any other vaccination.

Washington and Minnesota’s health departments said they noted the importance of their states’ Covid-19 inoculation campaigns and have looked for ways to increase their payments to providers. Washington State Health Care Authority asked its state legislature to boost its reimbursement funding. That request was swiftly approved and added nearly $20 to its Covid-19 vaccine reimbursement rates.

Minnesota state lawmakers, meanwhile, are pushing through a bill this week to increase their rate to the federal level because vaccine reimbursement is outlined in state law. Sarah Berg, a spokeswoman for the Minnesota Department of Human Services, said the agency was “pleased that there is a bill moving quickly through the Legislature to increase Minnesota’s reimbursements to match Medicare.”

She noted there has been concern in the department that “Medicaid enrollees might be disadvantaged in getting vaccinated because of financial incentives.”

Now that states are expanding eligibility to those under 65, providers are warning the complexities of the American health insurance system are set to fully kick in.

For pharmacists, it’s always a little more complicated. They bill to a person’s pharmacy benefits, which are largely overseen by pharmacy benefit managers, or PBMs, rather than directly to a patient’s health insurance carrier.

Historically PBMs have acted as middlemen between insurance companies, providers and pharmaceutical companies, negotiating drug pricing and programs. In recent years, lawmakers and providers have accused them of unfair pricing between health insurance companies and the pharmacies, allowing PBMs to take home tidy sums.

“None of what PBMs do is specifically relevant to vaccination,” Jack Hoadley, research professor emeritus at Georgetown University’s Health Policy Institute, said. “But they’ve developed a position of leverage with pharmacies and they’re able to pretty much dictate the dispensing fees and, in this case, administration fees, especially for smaller pharmacies. If you’re an independent pharmacist, the pricing is typically take it or leave it.”

Some are concerned they could create hurdles and low reimbursement rates again.

“We’ve been disenfranchised for years,” said Mehul Khakhkhar, owner of Upgrade Pharmacy in Chicago, which has not yet offered Covid-19 vaccinations. “And so now when it really comes time to be able to help, we’re still not put in a position to succeed. It’s almost like we feel like we’re being kicked when we’re already down.”

Nevertheless, some states have already acted based on complaints they’ve received from pharmacists.

Pennsylvania Insurance Commissioner Jessica Altman said in a statement to NBC News that her department, which oversees insurers in the state, were aware that some PBMs were reimbursing providers “at rates that are below Medicare rates” after receiving a formal complaint.

Altman said her agency “reached out to all commercial carriers in Pennsylvania’s market.” Those that “had not already been reimbursing at Medicare rates” were working “to bring rates up to at least match Medicare reimbursement,” she said.

Pharmacists administering the vaccine start with vaccination clinics early in the morning and stay up late to wrestle with inputting billing information. They deal with clogged phone lines as people across the state call in with questions and demand vaccination appointments. Pharmacists and their staff schedule as many patients as they can, maintain waiting lists of thousands and report data back to the state and federal government each day.

The work has been grueling and there is little relief on the horizon, beyond the thanks they get from grateful patients.

We're being put in a position where we have to ask, ‘Is it even worth it?’

Eric Larson, a pharmacist in central Florida, has been driving to patients who cannot leave their homes. It’s essential to the effort to vaccinate vulnerable Americans, but he isn’t reimbursed for gas and can only treat a few patients an hour — further reducing his ability to scale up the number of vaccinations.

A member of his staff is tasked with scheduling his routes in an attempt to cut down on the cost of Larson’s trips.

“I don’t know many people that are going to drive around for $17 or even $36 round trip,” he said. “We’re doing it because we love doing it. I’m not complaining at all, but it’s the hardest thing we’ve ever done.”

That’s a feeling echoed by all of the pharmacists, but many remained hopeful that the issues could be smoothed out. They don’t want to have to pick between continuing to take on the costly and laborious burden that may sink their business or ending the work to bring the nation’s worst public health crisis in a century to an end.

“We know that no other major organization can do what we can do because we have put our heart and our soul into it,” said Antypas, who has now vaccinated thousands. “But we’re being put in a position where we have to ask, ‘Is it even worth it?’”

Phil McCausland is an NBC News reporter focused on rural issues and the social safety net.