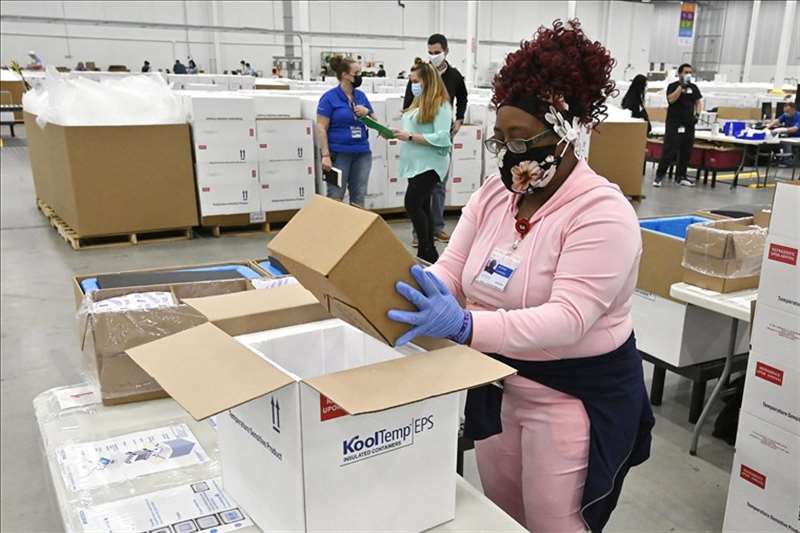 Having two vaccines is good. But three is better — and it could make a major difference in getting the pandemic under control.

“It could be a total game changer,” said Dr. Muriel Jean-Jacques, an assistant professor of medicine at Northwestern University.

Millions of doses of the Covid-19 vaccine developed by Johnson & Johnson will soon be available in the U.S., a much-anticipated development that could help turn the tide of the pandemic by vastly speeding the rate at which people are vaccinated.

Experts say the newly authorized vaccine could play a key role in staving off another surge of infections, particularly as the recent sharp declines in reported cases of Covid-19 appear to be leveling off and rising once again.

“We’ve never had to vaccinate our whole population at the same time before — not to mention the rest of the world — so having more vaccines will make that easier,” Jean-Jacques said.

The vaccine’s authorization is a significant milestone, because it will help ease the supply and distribution bottlenecks that have hampered the rollout of vaccines across the country, said Dr. Stella Safo, an HIV primary care physician who is an assistant professor of medicine at the Icahn School of Medicine at Mount Sinai.

“It’s invaluable,” she said. “The more options we have, the better. It’s really a thing to celebrate.”

The Johnson & Johnson vaccine does not require ultra-cold storage conditions, as the vaccines made by Moderna and Pfizer-BioNTech do, and it can instead be kept in regular refrigerators. That could ease some distribution challenges, particularly in rural communities.

And the vaccine requires only a single dose, unlike the Moderna and Pfizer vaccines, which require two shots three to four weeks apart.

A single-dose vaccine could help boost the country’s rate of vaccination, and increasing the number of people vaccinated each week will be critical for containing new outbreaks, especially as more contagious variants of the coronavirus become more widespread.

Moderna’s vaccine is 94 percent effective at preventing symptomatic Covid-19, and Pfizer’s vaccine was found to be 95 percent effective. But experts said the three vaccines should not be compared based on those numbers alone, because they all provide strong protection against severe disease.

The Johnson & Johnson clinical trials also took place later in the pandemic and in regions where worrisome variants of the coronavirus have emerged.

“We’re not comparing the same thing, because the pandemic has changed,” Safo said. “The reality of where we are now is very different compared to the summer, when those other vaccines were first evaluated.”

Scientists have been particularly concerned about how well the current vaccines will protect against the variants that are circulating and new ones that may emerge.

In South Africa, where a strain of the virus thought to be more contagious is widespread, the Johnson & Johnson vaccine was found to be 64 percent effective at preventing moderate to severe disease.

In early analyses, both the Moderna and the Pfizer vaccines were found to be less protective against the South African variant, although neutralizing antibodies for both remained above protective levels.

Public health officials have said the U.S. is in a race against time to vaccinate as many people as possible before other variants begin spreading. Researchers are especially worried that the virus could mutate in a way that enables it to escape the protection induced by vaccines, although there is no evidence to suggest that that has happened yet.

“If we want to stem the pandemic, we need all hands on deck and all vaccines on deck,” said Dr. Paul Goepfert, a professor of medicine and microbiology at the University of Alabama at Birmingham, who was the lead investigator for a study of the Johnson & Johnson vaccine’s effectiveness.

Still, a third vaccine option now raises important questions about who should get which vaccine and why. While Johnson & Johnson’s vaccine may be more practical for certain communities, it’s important for public health officials to be mindful of how people are affected by these decisions, Jean-Jacques said.

One way to combat misperceptions is to avoid direct comparisons and instead stress the context behind the numbers.

“The message that this vaccine is 100 percent effective against death from Covid-19 is borne out by the data,” Jean-Jacques said. “That’s a simple message to get across.”

Safo said doctors and public health officials should also focus on what’s at stake, which is especially important when dealing with vaccine hesitance.

“We have three options now,” she said, “so we should be smart about how we use them.”