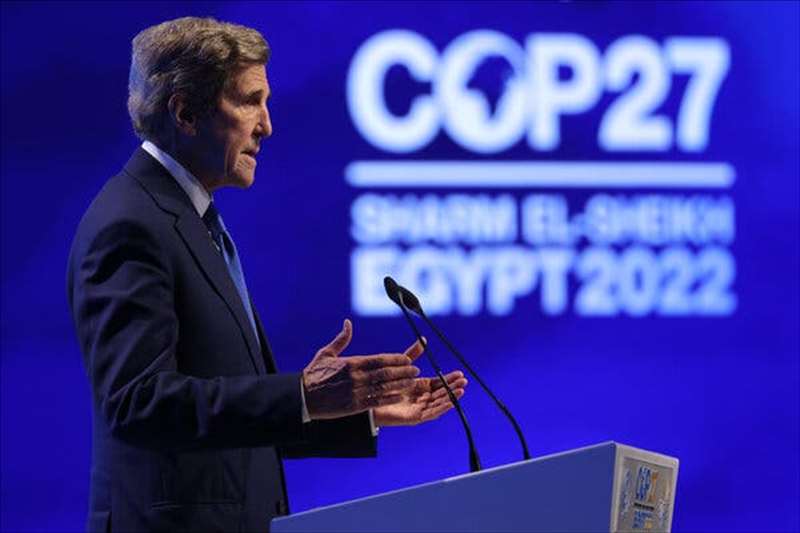 In an interview, Mr. Kerry said he would meet with the president next week to talk about “the road ahead.”

John Kerry, President Biden’s climate envoy, was evasive when discussing his future on Wednesday, saying he had “no plans” to step down, but he would not say if he hoped to continue to represent the country in future global climate talks.

Speaking from his Massachusetts home in his first interview since the United Nations climate summit last month in Sharm el Sheikh, Egypt, Mr. Kerry said he intended to talk with Mr. Biden next week “about the road ahead.”

The midpoint in any administration is frequently a time of churn. Mr. Kerry’s domestic counterpart, Gina McCarthy, left her position in September. As Republicans prepare to take control of the House next month, several have expressed an interest in investigating Mr. Kerry’s office. An October report in Axios indicated that Mr. Kerry was considering taking a position in the private sector.

Mr. Kerry, 78, said he was making no moves for the time being. “I’ve made no plans other than to try to complete the task,” he said.

Mr. Kerry led the United States delegation at the climate summit in Egypt, where nearly 200 nations agreed for the first time to create a fund to help poor countries that are experiencing irreversible losses from climate change.

For years, the United States and European countries, among the biggest sources of the greenhouse gases that are warming the planet, have blocked the idea of paying into a fund to help poor countries that are struggling with the effects of climate change. But at the November talks, the Europeans and Americans signed onto the idea, which Mr. Kerry called a “humanitarian effort" and “morally correct.”

Mr. Kerry also maintained that progress had been made on tackling the fundamental cause of climate change: the burning of fossil fuels. He called the summit “a success,” noting new emissions targets put forward by some of the world’s leading economies, including Indonesia and Mexico, as well as fresh pledges around curbing methane, a potent greenhouse gas.

But his assessment is a stark contrast to the open disappointment voiced by many of his counterparts in Europe who said governments fell short on ambition. The nearly 200 nations represented at the summit could not agree on a final statement calling for the phasing down of fossil fuels, language that was blocked by Saudi Arabia, according to negotiators.

The final text also referred to the use of “low-emission” technologies to slash emissions, a term many environmental activists said they fear could be used as a loophole to protect future investments in gas projects.

While 1.7 degrees Celsius crashes through the 1.5 degree guardrail, it’s better than the 2.7 degree rise that scientists projected after nations made their first climate pledges as part of the 2015 Paris Agreement.

Still, Mr. Kerry said countries that are major emitters of greenhouse gases, such as China, Russia and Saudi Arabia, needed to set more ambitious goals to reduce their carbon emissions.

“The entire world has to pick up the pace way beyond what it is today. We are woefully falling short,” Mr. Kerry said. “It’s entirely within the possibility that we can achieve our goals. It’s also entirely possible that we will fail because not enough countries are joining in the effort at this point in time.”

Mr. Kerry tested positive for Covid-19 in the final days of the climate talks in Egypt and was confined to his hotel room. He said he spent much of that time on the phone with his counterparts as well as António Gutteres, the United Nations secretary general. Members of his team could be seen at various points during the final evening holding up a phone to show Mr. Kerry on video.

He described the experience as “disappointing” but insisted that his physical absence had not been a handicap. Yet Mr. Kerry’s diagnosis upended discussions with China, which had only restarted mid-summit after a meeting between Mr. Biden and President Xi Jinping thawed months of frozen relations.

“We’re going to meet again,” Mr. Kerry said of his Chinese counterpart, Xie Zhenhua. “We’re in touch to figure out the where and when, but we are very anxious to continue the conversation.”

One looming discussion will be around which countries will be expected to contribute to the new climate fund for vulnerable nations. China is considered a developing country in the United Nations climate system and does not want to contribute money in the same way as wealthier, developed nations may be obligated.

China is currently the world’s top polluting country, while the United States is the nation that has pumped the most greenhouse gases into the atmosphere since industrialization.

Republicans have attacked the plan as “climate reparations” and assailed the idea that U.S. tax dollars could end up in a fund that could benefit China, its chief economic rival, because it is categorized as a developing nation.

Mr. Kerry noted that the language agreed upon in Egypt did not specify which nations would contribute to the fund or be on the receiving end. And he said the language addressing the fund clearly said it would not be considered compensation, something he called an “unacceptable concept.”

Republicans have also said they are intent on taking a close look at staffing, salaries and expenses in Mr. Kerry’s office as well as trips Mr. Kerry has taken on a private jet.

“I’m not going to deal with hypotheticals,” Mr. Kerry said when asked about being hauled before a Republican-led House oversight panel. But he also said “There’s no investigation to be done there.” He said the private jet was sold last year and “I didn’t fly anywhere whatsoever in the world on our private plane for business.” He said a handful of trips including to China and Mexico required charter flights but said “I flew commercially all around the world.”

“I’m going to stay focused on the business of getting the climate crisis addressed and I hope the Congress will do the same,” he said.