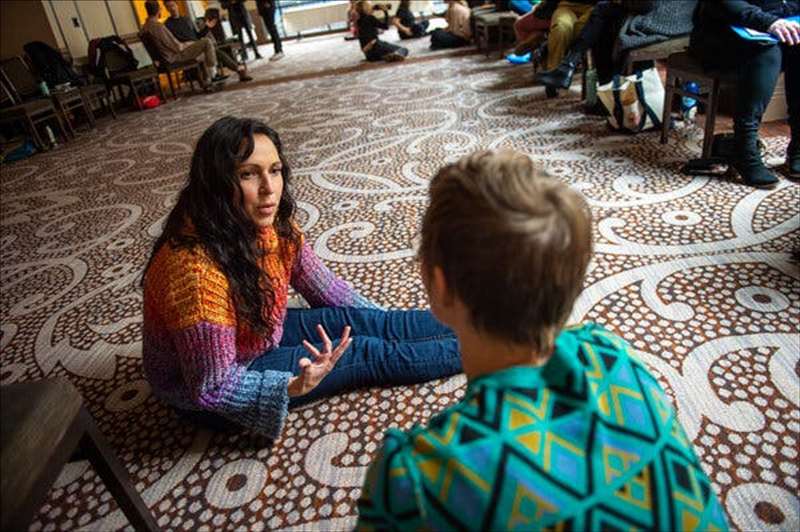 On Jan. 1, Oregon became the first state to allow adult use of psilocybin “magic” mushrooms. Licensed guides will likely determine whether the program is a success.

PORTLAND, Ore. — The curriculum was set, the students were enrolled and Oregon officials had signed off on nearly every detail of training for the first class of “magic” mushroom facilitators seeking state certification.

But as the four-day session got underway inside a hotel conference room in early December, an important pedagogical tool was missing: the mushrooms themselves.

That’s because state officials, two years after Oregon voters narrowly approved the adult use of psilocybin, were still hammering out the regulatory framework for the production and sale of the tawny hallucinogenic fungi.

Instead, the students, most of them seasoned mental health professionals, would have to role play with one another using meditation or intensive breathing practices that could lead to altered states of consciousness — the next best thing to the kind of psychedelic trip they would encounter as licensed guides.

Like many of the two dozen students who paid nearly $10,000 for the course, Jason Wright, 48, a hospital psychiatric nurse in Portland, said he was thrilled to be part of a bold experiment with national implications. “It’s incredible to be on the front lines of something that has the potential to change our relationship with drugs that should never have been criminalized in the first place,” he said.

On Jan. 1, Oregon became the first state in the nation to legalize the adult use of psilocybin, a naturally occurring psychedelic that has shown significant promise for treating severe depression, post-traumatic stress disorder and end-of-life anxiety among the terminally ill, among other mental health conditions.

Although scientists are still working to understand their therapeutic dynamics, psilocybin and other psychedelics are thought to promote neuroplasticity, a rewiring of the brain that gives patients fresh perspectives on longstanding psychiatric problems.

Measure 109, as it’s called, authorized the creation of psilocybin service centers where anyone over 21 can consume the mushrooms in a supervised setting. One key requirement is that a state-certified facilitator must be present during drug-induced journeys, which can last five or six hours.

Unlike cannabis, which can be sold at dispensaries, Oregon will not allow the retail sale of psilocybin; consumption must take place at a licensed service center.

For drug reform supporters, Oregon’s approval of Measure 109 is nothing short of revolutionary, a seismic policy shift they hope will inspire other states and municipalities — and persuade federal authorities to ease longstanding prohibitions.

Oregon voters also made history in 2020 by decisively voting to decriminalize the personal possession of small amounts of hard drugs like heroin, cocaine and methamphetamine.

Although psilocybin and the other drugs remain illegal at the federal level — a regulatory clash that complicates the state’s headlong embrace of decriminalization — Oregon’s decision to overhaul its relationship with mind-altering compounds is already influencing other jurisdictions.

In November, Colorado voters approved a ballot measure that removes criminal penalties for possessing certain psychedelics, and similar ballot measures and reform legislation have been introduced in New York, Washington and a dozen other states. Over the past three years, Washington D.C., Seattle and a score of American cities have also moved to decriminalize psilocybin.

Mounting scientific interest in psychedelics has reached the highest levels of government. The Food and Drug Administration in 2018 granted psilocybin “breakthrough therapy” status for major depressive disorder, a designation that paved the way for clinical trials. Researchers say they expect full F.D.A. approval in the coming year or two. Another drug with strong therapeutic potential, MDMA, or Ecstasy, is likely to win F.D.A. approval even sooner for treating post-traumatic stress disorder.

“Psychedelic medicine is starting to transcend partisan politics in a way that few issues have,” said Sam Chapman, executive director of the Healing Advocacy Fund, a nonprofit organization that backed Measure 109 and has been working to guide its implementation. “It’s our responsibility to create a golden standard that’s worthy of wider implementation.”

Oregon’s experiment has not been without hiccups. The ballot measure’s passage created a backlash in rural, more conservative parts of the state. A subsequent ballot measure in November resulted in 25 of the state’s 36 counties voting to opt out of the program for now.

The prolonged regulatory vacuum provided an opening for entrepreneurs who jumped the gun. In early December, police raided Shroom House, a retailer in Portland that the authorities said was illegally selling psilocybin mushrooms and drawing long lines of customers.

State officials say they are undaunted, even while acknowledging the gantlet of novel regulatory and logistical challenges. Psilocybin use is legal in a handful of countries, among them Brazil, Nepal and the Bahamas, but none have sought to create a system of supervised use.

Angela Allbee, a policy analyst at the Oregon Health Authority who oversees the state’s psilocybin services section, said the process had been slow and bumpy at times, in part because officials sought to maximize public participation through advisory panels, public hearings and meetings with law enforcement officials.

The biggest tensions erupted over the issue of affordability, given that psilocybin sessions will not be covered by insurance, at least as long as the federal government lists the drug as a Schedule 1 substance with “no currently accepted medical use.”

A single session is likely to cost hundreds, if not thousands of dollars.

One debate centered on whether to embrace a therapeutic model that would require more intensive, and costly, oversight by a psychotherapist, or a less rigorous approach that would allow anyone over 21 to access the drug, with or without a mental health diagnosis, as long as trained facilitators were present during the session. Health officials opted for the latter, which they are calling a “non-directed” approach.

“Being the first in the nation means we have a responsibility to get this right and that sometimes means learning on the fly,” Ms. Allbee said.

There was a palpable sense of excitement as the inaugural cohort of students gathered at the Dossier Hotel in downtown Portland for a 160-hour course run by Fluence, an education and training consultancy that offers certification in the nascent field of psychedelic-assisted therapy.

“It feels like I’m dreaming,” said Brian Pilecki, 43, a psychotherapist who was one of the instructors. “I never imagined this would happen in my lifetime.”

The trainees included an ordained rabbi/clinical therapist who lives at an off-the-grid ranch near the town of Bend; a young psychiatrist disillusioned by the limitations of conventional psychotropic medications; and a trauma specialist who sheepishly described herself as a Christian fundamentalist shaped by a lifetime of antidrug sentiment.

But the trauma therapist, Sherry Beckmann, 52, said her recent experience with deeply troubled war veterans convinced her to reconsider that antipathy after some of her patients had breakthroughs after a hallucinogenic experience. “The patients don’t lie,” said Ms. Beckmann, who has come to see the drugs as “spiritual gifts” from God. “It’s part of my own journey too. I mean I don’t know why I’m here today other than trusting a gut feeling.”

The certification programs are open to anyone with a high school diploma who has passed a background check. Licensure is limited to Oregon residents until 2025. But the Fluence program largely chose applicants with previous experience in the field of mental health — social workers, hospice nurses and psychiatrists.

The curriculum included significant emphasis on nontherapeutic matters, including Indigenous traditions involving hallucinogens, the negative social effects of U.S. drug policy and the impacts of systemic racism on marginalized populations.

Although psilocybin is widely considered safe and serious adverse reactions are rare, the practical aspects of the course sought to prepare facilitators for potentially difficult moments, including sexual arousal or intense emotional eruptions, especially among those with repressed trauma.

The first day of the Fluence course was largely devoted to self-reflection, with many students voicing frustration with the limitations of psychotropic drugs like Xanax or Zoloft that are used to treat the symptoms of mental illness, not the underlying causes. Others spoke reverentially about their own experiences with psychedelics.

At one point, an instructor asked the students to close their eyes, meditate and think about what brought them to the hotel conference room. Later, they broke into small groups to share personal stories about times in their life they felt oppressed or marginalized. They also spoke about the lack of diversity within their ranks, prompting a round of soul-searching about their role in promoting a therapy that, for the time being, will likely only be available to the privileged few.

But mostly there was elation that the long-awaited moment of legalized psychedelics had finally arrived. Mr. Wright, the hospital psychiatric nurse, said he had personally experienced the healing power of psychedelics and wanted his patients to experience those benefits as well.

The prevailing model of psychiatric care, he said, was focused on calming patients who show up at the emergency room in the throes of a psychotic or manic episode. The drugs, Mr. Wright said, were effective at stabilizing patients, but many of them simply returned again because the underlying trauma or depression remained untreated. “I’m happy to be here,” he told the group, “so I can stop pushing ineffective drugs to my patients.”