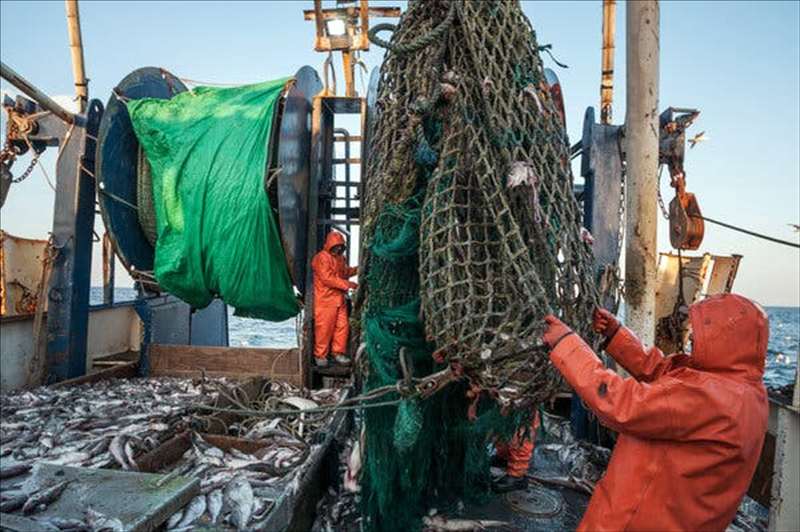 Among the surprising findings in a new paper on marine ecosystems: Trawling releases as much planet-warming carbon each year as global aviation.

For the first time, scientists have calculated how much planet-warming carbon dioxide is released into the ocean by bottom trawling, the practice of dragging enormous nets along the ocean floor to catch shrimp, whiting, cod and other fish. The answer: As much as global aviation releases into the air.

Protecting strategic zones of the world’s oceans from fishing, drilling and mining would not only safeguard imperiled species and sequester vast amounts of carbon, the researchers found, it would also increase overall fish catch, providing more healthy protein to people.

How much and what parts of the ocean to protect depends on how much value is assigned to each of the three possible benefits: biodiversity, fishing and carbon storage.

In order to maximize fish catch alone, the study found, nations would need to set aside 28 percent of the ocean for conservation. That’s because no-fishing zones serve as nurseries, replenishing fish and crustacean populations which then disperse beyond the protected areas.

“The worst enemy of fishing and food security is overfishing,” Dr. Sala said.

Right now, 7 percent of the ocean is protected, and less than 3 percent is highly protected.

The finding on emissions from trawling adds new urgency. Each year, the study found, bottom trawlers scrape an estimated 1.9 million square miles of the sea floor. If undisturbed, the carbon stored there can remain for tens of thousands of years.

The team had not planned to calculate the amount of emissions released by trawling until an outside reviewer for Nature required it, Dr. Sala said. So his team hired an additional researcher and got to work.

“I could not believe it,” he recalled, describing the video call when his colleagues revealed the number of emissions. “Immediately I went to Google and checked the global emissions by sector and by country, and said, ‘Wow, this is larger than Germany’s.’”

The carbon released from the sea floor leads to more acidified water, threatening marine life, and reduces the oceans’ capacity to absorb atmospheric carbon dioxide. China, Russia, Italy, the United Kingdom and Denmark lead the world in such trawling emissions.

Trisha Atwood, an aquatic ecologist at Utah State University who was one of the study’s authors, compared trawling to cutting down forests for agriculture.

“It’s wiping out biodiversity, it’s wiping out things like deep sea corals that take hundreds of years to grow,” Dr. Atwood said. “And now what this study shows is that it also has this other kind of unknown impact, which is that it creates a lot of CO2.”

In ongoing research, Dr. Atwood and others are studying whether that carbon dioxide from the sea bottom ultimately escapes into the air itself. Early data indicates that “a large proportion” does.

“I can tell you that the results are troubling,” she said.

Scientists underscore that any conservation measures need to happen in conjunction with an urgent transition away from fossil fuels.

“The results of this high-level analysis convey a very hopeful message,” said Josephine Iacarella, an aquatic ecologist at Fisheries and Oceans Canada who was not involved in the study.

“Currently each nation does it based on their own priorities,” Dr. Iacarella said. “To raise that to a global level is more challenging, but that discussion can be started by papers like this.”