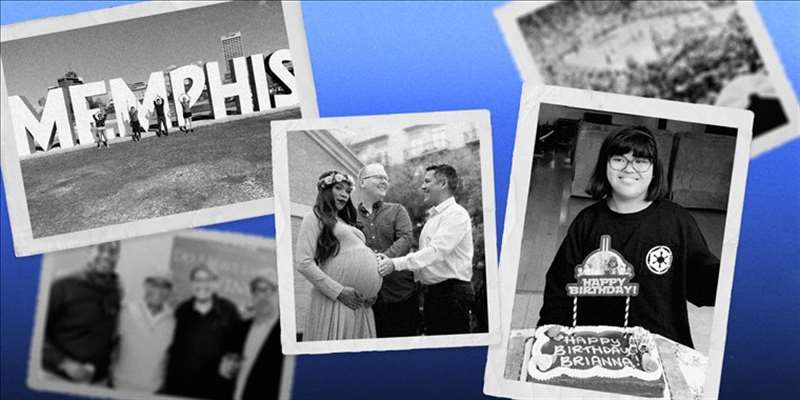 Weeks before he got the coronavirus and months before two family members died of it, Shannon Navarro had gone on a carefree birthday trip.

It was the end of February 2020. Navarro, of Shreveport, Louisiana, met up with a cousin for a six-day vacation in Texas. The two stayed in a hotel, ate out and attended a packed Houston Rockets game — activities that felt ordinary then and feel foreign to him now.

At the Rockets game, Navarro snapped what would be the last picture on his phone’s camera roll before the World Health Organization declared the coronavirus a pandemic on March 11, 2020.

“It looks like a pandemic nightmare,” Navarro, 40, an assistant store manager at Walmart, said of the throngs of maskless fans inside the arena in his picture. “I definitely would have anxiety trying to attend something like that now.”

While photos of happy events normally bring us joy, in our pictures from one year ago, many of us instead see painful reminders of all we have been forced to give up.

These images — snapshots from a way of life that has since been rendered inaccessible by the pandemic — may bring grief, experts say.

“People, when they rediscover an experience in various ways — could be through a photo or through a calendar entry — that’s actually enjoyable. But what’s different right now is that you have this comparison,” said Kristin Diehl, a professor of marketing at the University of Southern California’s Marshall School of Business who has studied how people experience and remember events and how taking photos affects their enjoyment of those events.

“It’s not just, ‘Oh, wasn’t that a great restaurant?’ You automatically compare it to ‘But we can’t do that right now,'” she said. “It has this opportunity to bring up negative emotions.”

Some people sent in pictures of their children grinning at sports practices that were abruptly halted days later. Others submitted photos of the last times they had fun nights out with colleagues, or attended crowded concerts, or visited elderly relatives.

"After a reset — a yearlong reset — even getting together with friends in your backyard may make you way happier than it did before."

As difficult as it has been not to take part in these activities, there may be a silver lining to some of them being on pause, Diehl said.

“Now, something that you did maybe on a regular basis, like going to the movies, seems so special,” she said. “After a reset — a yearlong reset — even getting together with friends in your backyard may make you way happier than it did before.”

But not everything from before the pandemic can resume.

The last photo that Janice Wang-Polagruto of West Sacramento, California, has on her phone from before the pandemic is of her daughter, Gabriella, 13, at a gymnastics meet. It would end up being Gabriella’s last meet ever, although neither she nor her mother knew at the time.

“I always felt so much pride,” Wang-Polagruto, 47, a senior clinical research coordinator for University of California, Davis Health, said of the 41 gymnastics meets Gabriella competed in. “I was so proud of her and her courage for getting out there and doing these scary, difficult skills.”

For nearly all of the past year, Covid-19 restrictions prohibited indoor gymnastics practice where Gabriella lives. Her coaches tried to make the best of it, having the gymnasts lift weights and stretch outside, Wang-Polagruto said.

But not being able to practice routines or learn new skills in the gym started to wear on Gabriella, who had been doing gymnastics since she was 3, Wang-Polagruto said. And when the family got the news last month that practice would finally be able to resume indoors at a very limited capacity, Gabriella surprised everyone by announcing that she no longer wished to return.

“That was really, really hard to hear,” Wang-Polagruto said. “We were prepared for her exiting her lifelong sport at some point in time, but not this way.”

Wang-Polagruto is hopeful that Gabriella will find new passions. She has expressed interest in cheerleading.

But for others, what the pandemic stole cannot be filled with something else.

Navarro, the Louisiana store employee, lost a grandmother and an aunt to the coronavirus. He was unable to visit them to say goodbye, and Zoom funerals with far-flung relatives, he said, did not bring him closure.

“Even with as great as the technology is today, it still doesn’t bring you that warmth that you need between you and a loved one,” he said.

In addition to the challenges the year brought, for many people, it also felt impossibly long.

Susan Sedlacko, 26, of Columbus, Ohio, looks back at her final photo before the pandemic — a picture of a trip to Memphis, Tennessee, in early March 2020 with friends — and is in disbelief that it was only a year ago.

“March felt like it was four years long last year,” said Sedlacko, a youth development coordinator at a nonprofit that serves children and families. “There was a point that I forgot we had gone to Memphis because so much happened since then.”

That included being laid off from a different position in her organization; canceling her grandmother’s 90th birthday cruise, which her family was supposed to have gone on; and broader concerns that weighed heavily on her, such as political stress, while constantly worrying about the health of people she cares about.

Research explains how time can feel warped. Perception of how much time has passed since an event took place is influenced by the number of changes associated with the event, Diehl said.

“The more changes you can retrospectively cue up, the longer something seems,” she said.

And there were many changes associated with the pandemic for everyone, making anything that occurred just before the pandemic feel all the more distant.

For Joel and Carl Walsh of Austin, Texas, who became the parents of twins on March 10, 2020, it was a year they thought would involve showing off their newborns to family and friends.

Instead, the twins’ entire lives have been lived under the restrictive shadow of the pandemic.

The babies were born seven weeks early via a surrogate a day before the coronavirus was declared a pandemic. The couple’s last pre-pandemic photo is a picture of themselves with their surrogate, LaPorsche Wilson, after their baby shower, two days before the twins’ unexpected arrival and three days before the pandemic was declared.

The hospital went into lockdown the day Wilson went into labor, and staff members allowed only one parent in the room for the babies’ birth — forcing the Walshes to scramble to choose who would attend. The hospital also did not permit Wilson to hold the twins after they were born, which had been in Wilson’s contract with the Walshes and which both she and the Walshes had been looking forward to.

Instead, she met them on their way home from their six-week stay in the neonatal intensive care unit.

“We went straight to her house and visited for an hour, or maybe two. Not very long because of the pandemic and all the fear we had,” said Joel Walsh, 41, a real estate agent. “She didn’t even touch them.”

Neither did close friends, who visited over the course of the year but came only as far as the front door to wave and talk to the twins.

“We have a huge extended family that is just ready to meet them,” Walsh said, adding that they had hoped to have a big first birthday party but instead made it virtual. “We just are ready to celebrate.”

Others are also eager for it to be safe to get together with family again. Beverly Contreras, 52, of Union City, California, has three daughters. The final pre-pandemic photo on her camera roll is from a birthday party with about 30 people for her middle daughter, Brianna, who is now 17.

Brianna has special needs, including life-threatening epilepsy, so her birthdays have always been “a little bit more special — every year that she is with us, it’s a blessing,” Contreras said.

“That picture is frozen in time for me when her life was so much simpler,” Contreras said.

Even with the grief of the past year, some see reason for hope.

Dr. Vincent Schooler, 48, a gastroenterologist who lives in Greensboro, North Carolina, was at the 2020 Atlantic Coast Conference basketball tournament with friends in his final pre-pandemic photo. Going to watch basketball, he said, was something he took for granted.

“These are just little things compared to people dying and having post-Covid issues, but these are nice things that we look forward to in life,” Schooler said.

Schooler and his wife, an internal medicine physician, have been fully vaccinated against the coronavirus, and he is hopeful that the vaccination rollout will continue rapidly. He believes gatherings with family and friends will be possible again soon — if everyone continues to take precautionary measures.

“I know it’s hard with more people getting vaccinated and the warm weather coming,” he said. “If people let their guard down too quick, we’re going to get set back a lot further than we are now.”

Contreras said the past 12 months have made her family closer.

Remote-schooling her children while working as a senior sourcing manager for a medical device company has been stressful, she said.

But normally, she would be traveling for work. Instead, she has been home, and that has had benefits. She has had more opportunities to fill up her camera roll with family photos, even if they aren’t pictures of activities they used to do before the pandemic.

“I’ve had this whole year to see my kids grow,” Contreras said, “which I’ve never had before.”

Elizabeth Chuck is a reporter for NBC News who focuses on health and mental health, particularly issues that affect women and children.