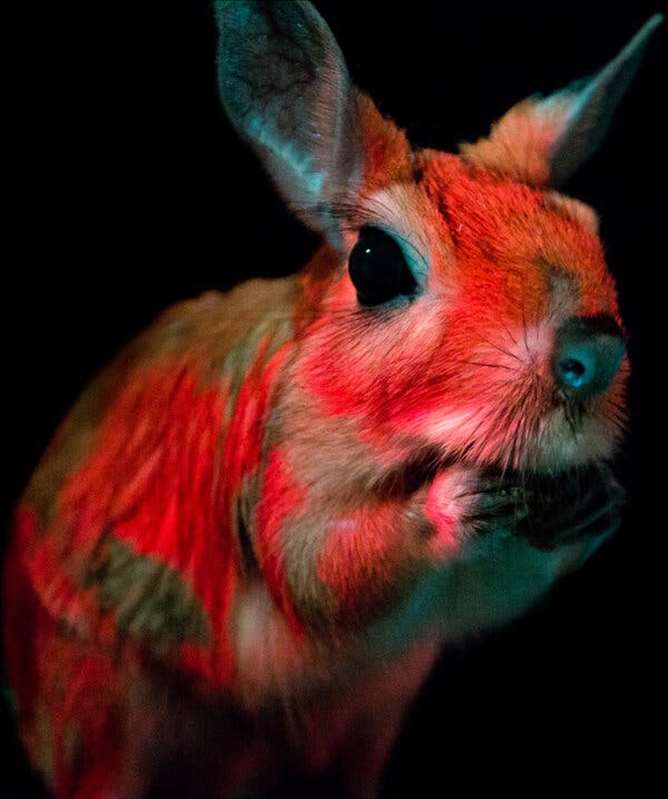 The springhare — whose coat glows a patchy pinkish-orange under UV light — joins the platypus and other mammals with this perplexing trait.

Springhares, which hop around the savannas of southern and eastern Africa, weren’t on anyone’s fluorescence bingo card.

Like the other glowing mammals, they are nocturnal. But unlike the other creatures, they are Old World placental mammals, an evolutionary group not previously represented. Their glow, a unique pinkish-orange the authors call “funky and vivid,” forms surprisingly variable patterns, generally concentrated on the head, legs, rear and tail.

The researchers then went to the Field Museum in Chicago, armed with curiosity and blacklights. When the team tried a drawer that housed preserved springhares, they beamed back.

Over the next several years, the researchers examined 14 springhare specimens from four countries, some male and some female. All showed fluorescence — many in a patchy pattern, which was unique among mammals they’ve studied, Dr. Olson said.

They also reached out to zoos, to make sure live animals have the trait. A UV photo shoot at Omaha’s Henry Doorly Zoo and Aquarium yielded more observations, as well as many glamour shots in which the rodents look as if they’ve daubed themselves with body paint before setting off for a rave.

Chemical analysis of springhare hair found that the fluorescence comes largely from a set of pigments called porphyrins, which have also been found to cause this effect in marine invertebrates and birds, said Michaela Carlson and Sharon Anthony, chemists at Northland College who worked on the paper.

But the biggest question — the one that flashes, like a neon sign, through all of these papers and related observations — is: why?

The springhare findings in particular provide some avenues for exploration. There is a possibility that fluorescence helps animals hide from predators with UV-sensitive vision, by absorbing wavelengths that would otherwise be brightly reflected and emitting less visible ones. In that case a patchy pattern like the springhares’ might be another asset, Dr. Olson said.

In some ways, though, the admission of springhares to this pantheon makes things more confusing.

“Are these species all found on one part of the mammalian phylogenetic tree? Certainly not,” said Tim Caro, a professor of evolutionary ecology at the University of Bristol in England who was not involved with the research. “Do they all have one sort of lifestyle? No” — all eat different things, he said. “Are they using this delightful coloration to attract mates so we might see a characteristic signature of one sex but not the other fluorescing? No, that does not happen either.”

That “there is no pattern,” Dr. Caro said, suggests that “either we don’t know the function of this sort of coloration, or there is no function at all.”

According to Dr. Olson, there’s only one thing to do: Keep shining those blacklights.

“The hard work of documenting this trait more broadly, across Mammalia, is now at hand,” he said. Watch this space.