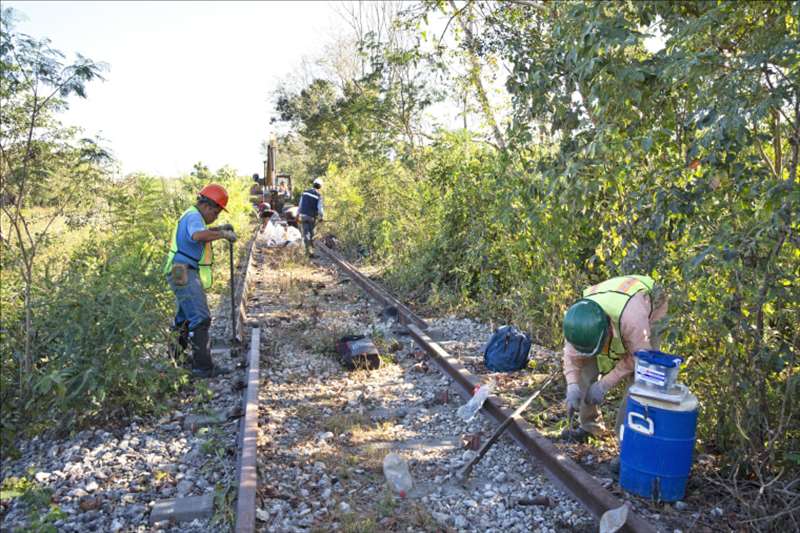 MEXICO CITY — Parts of Mexico’s remote southern jungles have barely changed since the time of the ancient Maya.

In the eyes of President Andrés Manuel López Obrador, a railway his government is building — known as the Tren Maya — will bring modern connectivity to areas for generations deprived of significant economic benefits.

But the railway and its hasty construction also critically endanger pristine wilderness and ancient cave systems beneath the jungle floor, droves of scientists and environmental activists say.

The railway “is splitting the jungle in half,” said Ismael Lara, a guide who takes tourists to a cave that shelters millions of bats near the Calakmul Biosphere Reserve. Lara fears the train, due to pass close by, will disrupt wildlife routes and attract too much development to fragile ecosystems.

Over almost a year, Reuters photographed construction at points along the full length of the planned rail track, documenting the evolution of the flagship project which López Obrador has pledged to finish by the end of 2023.

The 1,470 km (910 miles) of rail are set to carry diesel and electric trains through the Yucatan Peninsula and connect Mexico’s top tourist destination Cancun to the ancient Mayan temples of Chichen Itza and Palenque.

The railway has deeply divided Mexicans and the controversies surrounding the construction exemplify struggles developing countries across the globe face to balance economic progress with environmental responsibility.

FONATUR, Mexico’s tourism agency charged with the project, has said the railway will lift more than a million people out of poverty and could create up to 715,000 new jobs by 2030. Construction costs are seen at up to $20 billion, López Obrador said in July.

FONATUR defended the speed with which the studies were produced. “Years are not required, expertise, knowledge and integration capacity are required,” it said in response to questions from Reuters. It declined to comment on the U.N. statement.

The Tren Maya route cuts a swathe up to 14 meters (46 ft) wide through some of the world’s most unique ecosystems, bringing the modern world closer to vulnerable species such as jaguars — and bats.

It will pass above a system of thousands of subterranean caves carved out from the region’s soft limestone bedrock by water over millions of years.

Crystalline pools known as cenotes punctuate the Yucatan peninsula, where the limestone surface has fallen in to expose the groundwater. The world’s longest known underground river passes through the caves, which have also been the site of discoveries such as ancient human fossils and Maya artifacts like a canoe estimated to be more than 1,000 years old.

If built badly, the railway risks breaking through the fragile ground, including into yet-to-be explored caves below, says Emiliano Monroy-Ríos, a Mexican geochemist with Northwestern University who has extensively studied the area’s caves and cenotes.

Diesel, he adds, could also leak into the network of subterranean pools and rivers, the main source of fresh water on the peninsula.

With less than 20% of the subterranean system believed to have been mapped, according to several scientists interviewed by Reuters, such damage could limit important geological discoveries.

The government’s environmental impact study for Section 5, the most controversial stretch, says environmental impacts are “insignificant” and have been adequately mitigated. The study says the risk of collapse was taken into account in the engineering of the tracks, and that the area will be observed through a prevention program.

Dozens of scientists disagree, writing in open letters that the assessments are riddled with problems, including outdated data, the omission of recently discovered caves and a lack of input from local hydrology experts.

“They don’t want to recognize the fragility of the land,” said Fernanda Lases, a Mérida-based scientist with the National Autonomous University of Mexico (UNAM), calling the problems identified “highly worrisome.”

The names of the 70 experts who participated in the government study were redacted from the publication.

One piece of research used by the government to support its conclusions was taken from a blog by Monroy-Rios, who says he was never contacted by the authors of the report. His research highlights the need for extensive surveillance and monitoring for any infrastructure project in the region. He says this has not happened.

“I guess their conclusions were pre-formatted,” Monroy-Rios said. “They want to do it fast and that’s part of the problem. There’s no time for the proper exploration.”

An expert who participated in the reports and spoke to Reuters on condition of anonymity, said the work had been done quickly.

“There was pressure, especially due to delivery times,” the expert said.

The expert expressed concern the government would not properly mitigate risks experts had highlighted in the government’s impact studies or dedicate the necessary resources to the train’s maintenance.

FONATUR said the project would have resources and follow-up care in the future, including programs established for environmental protection.

“The Mayan Train project is of course safe, monitored and regulated by the environmental authorities as has happened up to now,” the agency told Reuters.

Despite the concerns about the railway, it has the support of many in villages that for decades have felt largely forgotten in national development plans.

In Xkuncheil, a small dusty town of about 140 people on Section 2 of the train that runs through Campeche state, Luz Elba Damas Jiménez, 69, owns a small store selling soda and snacks near the tracks. Many of her neighbors, especially the young men, are working on the project, she said. She also has more customers now.

“The government is working on good things for the country… Sometimes there just isn’t work in these small towns, but now they have jobs,” she said. “The truth is that we have benefited.”

Martha Rosa Rosado, who was offered a government payout to move when an earlier plan for the tracks was set to go through her home in Campeche’s Camino Real neighborhood, echoed those sentiments.

“No government ever remembers the southeast. Everything goes to the north, and the southeast is forgotten,” she said as she grilled pork outside her home of 40 years.

Some 450 kilometers (280 miles) away, in Playa del Carmen, near the beach resorts bustling with tourists, a group of volunteers — clad in helmets and head lamps — descend into the caves at weekends to monitor their condition.

Roberto Rojo, a biologist in the group, says the train will put the entire ecosystem above and below ground at risk.

“They are doing studies now that needed to be done at least four years ago,” Rojo said inside one cave directly below where the train is due to pass.

Behind him, tree roots descend from the ceiling of the cave like coarse rope, stretching down to be quenched by the water pooled at his feet.

“This is our life. We are putting in risk and in danger the stability of this ecosystem,” he said.