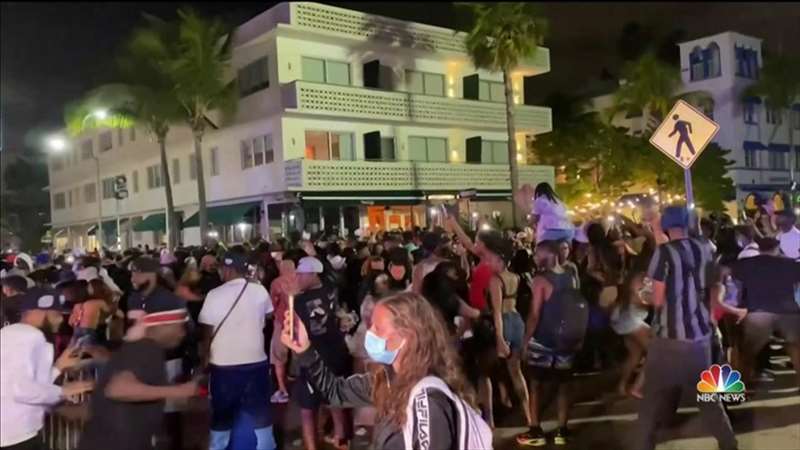 City commissioners voted to keep an 8 p.m.-to-6 a.m. curfew in their entertainment district, with an exception for restaurant delivery services, as well as restrictions on causeways beginning at 10 p.m.

The city has made over 1,000 arrests since February, about half of them involving out-of-state-residents, and the influx has led to increasing crowd-control issues, Miami Beach officials said Sunday.

The types of crowds that have descended on the popular South Florida destination are not made up of the regular college-age students officials are used to, Mayor Dan Gelber and City Manager Raul Aguila said.

“I don’t see this is a sort of spring break thing, because I don’t think these are college kids,” Gelber said. “I think it changes the nature of what we’re in front of here. I think there are very few places that are open as we have been and as our state has been open. And there are even precious fewer places as beautiful as ours that is open.”

Aguila said Florida’s lax Covid-19 rules have encouraged people from outside the state to visit.

“This is a spring break like no other,” Aguila said.

In recent weeks, officers have taken over streets and sidewalks, Police Chief Richard Clements said, and officers have seized an “alarming” number of firearms.

“We’ve let our officers know that the frequency by which they’re encountering these weapons on the street are probably greater than we’ve seen in five years,” Clements said.

Officers have struggled to rein in large groups of people who have caused fights and stampedes.

Two officers were injured this month as authorities tried to disperse crowds and arrested a 19-year-old on suspicion of inciting a riot. The person is alleged to have yelled profanities at police and resisted an order to disperse as a crowd gathered.

He was arrested on charges of battery on a police officer, incitement to riot and disorderly conduct. Investigators said he failed to leave when officers asked.

Visitors continued to descend on the city despite efforts to restrict activity before the emergency order was approved Sunday.

Miami Beach had imposed a midnight curfew, and alcohol on the beach is forbidden. Tourists were getting cellphone messages warning, “Vacation responsibly or be arrested.”

Doha Madani is a breaking news reporter for NBC News.

Tim Stelloh is a reporter for NBC News based in California.