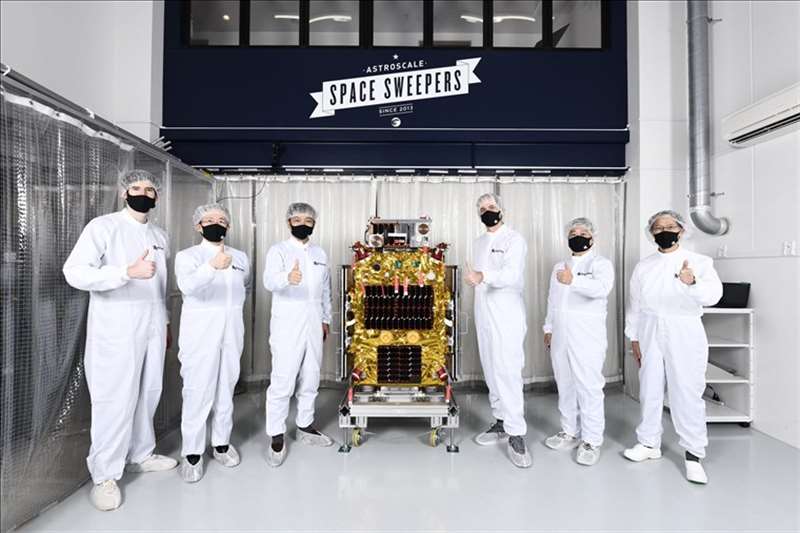 Low-Earth orbit, a narrow band of space relatively close to the Earth’s surface, is crowded with thousands of tons of space debris — objects as large as defunct satellites and spent rocket parts all the way down to nuts, bolts and flecks of paint.

If successful, ELSA-d could pave the way for future commercial services that reduce the amount of debris in space and promote more sustainable operations in orbit.

Bits of space junk, which fly through orbit at up to 18,000 miles per hour, can threaten other functioning spacecraft and pose safety risks to astronauts on the International Space Station.

Astroscale, the private company behind the ELSA-d mission, is hoping its technologies will open up a market for orbital debris removal.

“This is an issue like plastics in the ocean,” said John Auburn, Astroscale’s managing director in the United Kingdom. “We’ve been working for eight years to turn a difficult problem into a business.”

The ELSA-d mission is scheduled to liftoff Saturday from the Baikonur Cosmodrome in Kazakhstan at 2:07 am ET. The technology demonstration will be carried out by two spacecraft launched together: a nearly 400-pound “servicer satellite” and a 40-pound “client satellite” that is being used to simulate a piece of orbital debris.

Over the next few months, the two satellites will separate from each other and then engage in an elaborate game of orbital cat and mouse. In a series of tests, the servicer satellite will attempt to rendezvous with the client spacecraft, dock with the object and then subsequently release it.

“It’s enormously complex because you have to exactly match the motion of the spacecraft you’re docking with,” Auburn said. “When a spacecraft docks with the International Space Station, that’s a very controlled maneuver. But if you’re trying to dock with a failed satellite, it could be tumbling and you have to very slowly come together almost like you’re doing a dance.”

The mission will also test a magnetic docking plate that could be outfitted on future satellites before they are launched, which would provide a way for these spacecraft to be safely removed from orbit after they are decommissioned.

ELSA-d will operate for roughly six months. At the end of the mission, both the servicer and client satellites will be commanded to burn up in Earth’s atmosphere.

Aaron Rosengren, an assistant professor of mechanical and aerospace engineering at the University of California, San Diego, said being able to remove debris from low-Earth orbit will be critical for continued operations in space.

“Even though space is big, the usable orbits where we keep our satellites are quite small,” Rosengren said. “If we have a higher and higher density of objects in these very narrow regions of space, that will lead to more collisions over time.”

It’s estimated that these pieces of debris will remain in orbit for decades or longer, posing collision risks that could further exacerbate the problem.

The International Space Station has been hit by space debris in the past, and over the course of the station’s history, NASA has had to perform at least 26 special maneuvers to dodge wayward objects that wandered too close to the orbiting outpost. In 2020 alone, the agency had to perform three such maneuvers, according to former NASA administrator Jim Bridenstine.

These high-profile events demonstrate the real danger posed by space debris, Rosengren said. Without a way to clean up the limited space around Earth, this valuable real estate could one day become unusable, he added.

“We might already be at that tipping point,” he said. “There are tens of thousands of objects in this region, but we don’t have an understanding of the carrying capacity of orbits. How much is too much?”