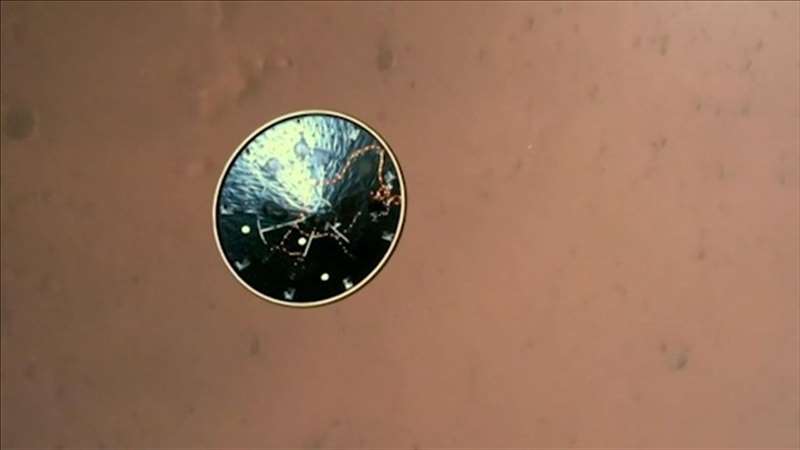 NASA’s Perseverance rover has recorded the first audio clips captured on the surface of Mars, beaming back to Earth guttural sounds of wind gusting on the red planet.

Thomas Zurbuchen, associate administrator for NASA’s Science Mission Directorate, said the new images and audio are “the closest you can get to landing on Mars without putting on a pressure suit.”

The audio clips were captured by two microphones that are mounted on Perseverance. In one, a faint buzzing noise can be heard in the background, which Dave Gruel, the lead engineer for Perseverance’s camera and microphone subsystem, said was from the rover itself. But roughly 10 seconds in, the microphone picked up the low growl of a wind gust, marking the first sounds recorded from the Martian surface.

“Imagine yourself sitting on the surface of Mars and listening to the surroundings,” Gruel said Monday in a news briefing. “It’s cool, really neat. Overwhelming, if you will.”

Gruel added that the rover will continue to capture sounds from Mars as the Perseverance mission gets underway. “We’re counting on both these instruments recording some really amazing sounds from the surface of Mars,” he said.

The newly released video footage included views from several different cameras, including three at the top of the vehicle that recorded the spacecraft as it plummeted through the Martian atmosphere.

Two other cameras on the rover documented crucial stages of the descent: the spacecraft’s parachute deploying, its protective back shell jettisoning, and a sky-crane lowering Perseverance to the ground. Another camera at the bottom of the rover captured stunning footage of Mars’ desolate, rust-colored terrain right up until the rover’s wheels touched down.

The videos offer a rare, first-person glimpse of what it’s like to settle on the surface of another planet. As the Perseverance rover closes in on its landing site in Jezero Crater, the onboard cameras recorded spectacular shots of Mars’ dune-filled, crater-marked vista.

“It is unlikely at this point in my career that I will pilot a spacecraft down to the surface of Mars, but when you see this imagery, I think you will feel like you are getting a glimpse into what it would be like to land successfully in Jezero Crater with Perseverance,” said Matt Wallace, the Perseverance mission’s deputy project manager at NASA’s Jet Propulsion Laboratory.

Jessica Samuels, a systems engineer at the Jet Propulsion Laboratory, said the rover is performing well so far. NASA will check the spacecraft’s various instruments over the next few weeks and upload new flight software so that the rover can begin driving on the surface and collecting data.

The car-sized robotic explorer is designed to roam the Martian surface searching for signs of ancient microbial life. Over the course of its two-year expedition, the rover will also collect samples of Mars rocks and sediments that will be returned to Earth during subsequent missions.

The rover’s landing site, Jezero Crater, is a 28-mile-wide basin that lies just north of the Martian equator. Scientists think the region was once home to an ancient river delta billions of years ago.

Gruel said mission controllers were thrilled by the first images beamed back by Perseverance. He said the rover captured more than 23,000 images, over 30 gigabytes of information, as it descended to the Martian surface.

“People were jumping up and down and giddy and ecstatic,” Gruel said. “It was a great feeling.”

And this early bounty from Perseverance is just a preview of what could be in store, Zurbuchen said.

“Stay with us,” he said. “There is much more amazement to come.”