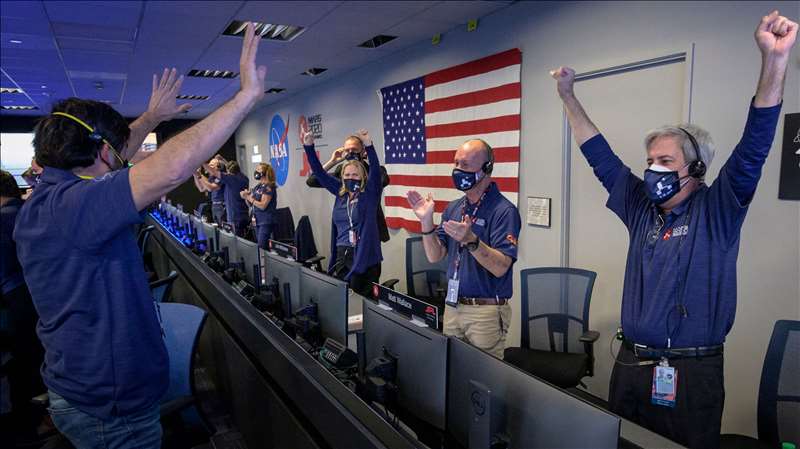 Perseverance’s arrival extends the successful U.S. landing record on the planet, and brings sophisticated tools to the hunt for alien life.

“Perseverance is going about one kilometers per second at an altitude of about 16 kilometers from the surface of Mars. We have entered heading alignment, which means Perseverance is no longer trying to control the distance to Mars, but — to the target on Mars, but instead is flying straight to the target. Perseverance is continuing to descend on the parachute. We are coming up on the initialization of terrain relative navigation and subsequently, the timing of the landing engines. Our current velocity is about 90 meters per second at an altitude of 4.2 kilometers. Touchdown confirmed — Perseverance is safely on the surface of Mars … [cheering] … ready to begin seeking the signs of past life.” “I’ll be moving in, showing you the safe zone that we’ve landed in.”

NASA safely landed a new robotic rover on Mars on Thursday, beginning its most ambitious effort in decades to directly study whether there was ever life on the now barren red planet.

NASA’s earlier missions showed that in the distant past some places were warm, wet and habitable. Now it is time to learn whether there were ever any microscopic inhabitants there.

“It‘s an enormous undertaking that’s in front of us, and it has enormous scientific potential to really be transformative,” Kenneth Williford, a deputy project scientist on the mission said during a news conference on Wednesday. “The question is, ‘Was Mars ever a living planet?’”

A successful test of the helicopter would be “a true extraterrestrial Wright Brothers moment,” said Thomas Zurbuchen, NASA’s associate administrator for science.

NASA has landed a series of rovers on Mars since the 1990s. Each has revolutionized human understanding of Mars.

The Spirit and Opportunity rovers, which landed in 2004, followed unmistakable signs of water that flowed several billion years ago. The Curiosity rover, which arrived in 2012, quickly discovered that its location, the 96-mile-wide Gale Crater, was once a freshwater lake, an environment that was clearly habitable even though it was not equipped to answer whether microbes once inhabited the lake.

Perseverance, by contrast, has the tools that can search for complex carbon-based molecules that could be the remnants of past microbes.

But Perseverance will most likely be unable to provide definitive proof of past life. Another part of its mission is to be the first step in a complicated robotic game of pick up sticks that will eventually bring some of the rocks back to Earth for scientists to study up close.

Perseverance will drill rock samples, seal them in tubes and then drop them onto the surface. A later rover, from the European Space Agency, will retrace Perseverance’s path in order to pick up the tubes and transfer them to a small rocket that will blast off to space. The samples will then be transferred to another spacecraft in orbit around Mars for the trip back to Earth, sometime in the early 2030s.

Perseverance was the third robotic visitor from Earth to arrive at the red planet this month. Last week, two other spacecraft, Hope from the United Arab Emirates and Tianwen-1 from China, entered orbit around Mars.

But NASA’s spacecraft did not go into orbit first. Instead it zipped along a direct path to the surface.

At 3:48 p.m. Eastern time, controllers at the mission operations center at NASA’s Jet Propulsion Laboratory near Pasadena, Calif., received word from Perseverance that it had entered the top of the Martian atmosphere at a speed of more than 12,000 miles per hour. The spacecraft was beginning the landing maneuvers that would bring it to a soft stop in just seven anxiety-drenched minutes.

NASA’s Perseverance rover will attempt to land in Jezero Crater, an ancient Martian lake roughly the size of Lake Tahoe. If successful, the rover will spend years exporing the river delta and making its way to the crater rim.

Mars is currently 126 million miles from Earth. Radio signals, traveling at the speed of light, take more than 11 minutes to travel from there to here. That means that when the message announcing the start of the landing sequence reached Earth, the rover had already been on Mars for four minutes. The only uncertainty was whether it had safely arrived in one piece, or had crashed into many pieces, another human-made crater on the surface of Mars.

The atmosphere of NASA’s operations center — more sparsely filled than previous Mars landings because of precautions required by the coronavirus pandemic — was mostly pensively quiet.

At 3:55 p.m. cheers erupted in the control room when Perseverance arrived on the surface.

As designed, the landing system set the rover down on a flat spot a bit more than a mile to the southeast of the river delta the scientists want to explore, near the boundary between two types of rocks, an area that could tell scientists a lot about the geologic history of the area.

“This is a great place to be,” said Kenneth Farley, the project scientist, said in the news conference after the landing.

Much of the surrounding terrain was more rugged. “We found the parking lot and hit it,” said Allen Chen, the lead of the engineering team that designed Perseverance’s landing.

Matt Wallace, deputy project manager on the rover, described the nagging worries of trying to execute the landing.

“It consumes you,” he said. “It becomes part of you. And in some ways, it’s hard still to believe that we finished it and that we’re done.”

The pandemic had made the task even more complicated as the rover’s teams on Earth rushed last year to meet an unmovable launch date in July last when Earth and Mars were close enough. If they had missed that, the rover would have had to stay on Earth for another two years.

“The pandemic struck and just about the worst time for this mission,” Mr. Wallace said.

Various speakers during the news conference described the difficulties of adapting to the new working conditions, but the team made adjustments, and the mission stayed on schedule.

“About an hour after landing, I got a phone call from the president of the United States,” Steve Jurczyk, the acting administrator of NASA, said. “And his first words were, ‘Congratulations, man.’”

The first few weeks will be spent testing out the equipment, turning on the instruments, making the first few short drives. Then NASA will turn its focus to testing its experimental helicopter.

Over the coming weeks, Perseverance will deploy the four-pound flying machine. If the Ingenuity helicopter works, it will be the first such flight in the atmosphere of another world in the solar system.

Flying on Mars is not a trivial endeavor. There is not much air there to push against to generate lift. At the surface of Mars, the atmosphere is just 1/100th as dense as Earth’s. The lesser gravity — one-third of Earth’s — helps with getting airborne. But taking off from the surface of Mars is like flying through air as thin as that found at an altitude of 100,000 feet on Earth.

Ingenuity is the flying equivalent of Sojourner, NASA’s first Martian rover, which landed on the red planet in 1997. Although it was the size of a microwave oven and just a demonstration of the basic technology, scientists could already see the benefits of driving to explore a variety of rocks and surface features, instead of sitting in one place like the earlier Viking landers.

With NASA’s rover on the surface, space watchers will soon turn their eyes back toward China’s Tianwen-1 mission. As it orbits Mars, the spacecraft is preparing for a rover landing of its own. In May or June, the mission’s lander and unnamed rover will try to set down in a basin called Utopia Planitia. If it succeeds, that explorer will study the ice composition of the region, potentially helping future astronauts understand what resources are available to them should they set off for the red planet.