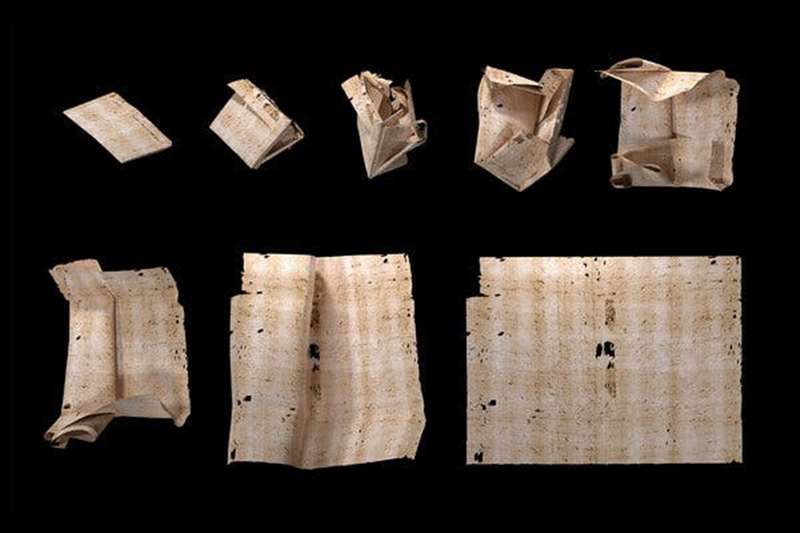 M.I.T. researchers have devised a virtual-reality technique that lets them read old letters that were mailed not in envelopes but in the writing paper itself after being folded into elaborate enclosures.

The new technique could open a window into the long history of communications security. And by unlocking private intimacies, it could aid researchers studying stories concealed in fragile pages found in archives all over the world.

“We really need to keep the originals,” Ms. Dambrogio said. “You can keep learning from them, especially if you keep the locked packets closed.”

The old letters were protected from prying eyes when the sheets of writing paper were carefully folded to become their own secure enclosures.

The first step of their digital opening is to scan a target letter with an advanced X-ray machine. The resulting three-dimensional image — much like a medical scan — reveals the letter’s internal configuration. A computer then analyzes the image to undo the folds and, almost magically, turn the layers into a flat sheet, revealing handwritten text that can be read.

The team translated one of the digitally opened letters from the Brienne Collection. It was dated July 31, 1697, and sent from Lille, France, to a French merchant in The Hague. It turned out to be a request for a certified copy of a death notice. The letter also asked for “news of your health.”

More analyses of the Brienne Collection, the paper added, may enrich studies not only of postal networks in early modern Europe but of the region’s politics, religion, music, drama and patterns of migration.

In addition to announcing its technique for unlocking the letters without damaging them, the team studied 250,000 historical letters that resulted in “the first systematization of letterlocking techniques.” The scientists and scholars found 12 formats of locked letters — the most complex having an overall shape defined by 12 borders — as well as 64 categories involving such manipulations as tucks, slits and folds. The team gave each locked letter a security score.

Dr. Smith of King’s College London, who lectures on early modern English literature, said the art was so diverse that a person’s lock could serve almost as a signature. A letter, he said, “became an ambassador for you and had to embody something of you.”

Without the ability to unlock letters digitally, it took a decade for scholars to conclude that Mary, Queen of Scots, had secured the letter to her brother-in-law with a distinctive spiral stich. Virtual unfolding, the team said, could have documented that step “in a matter of days.”