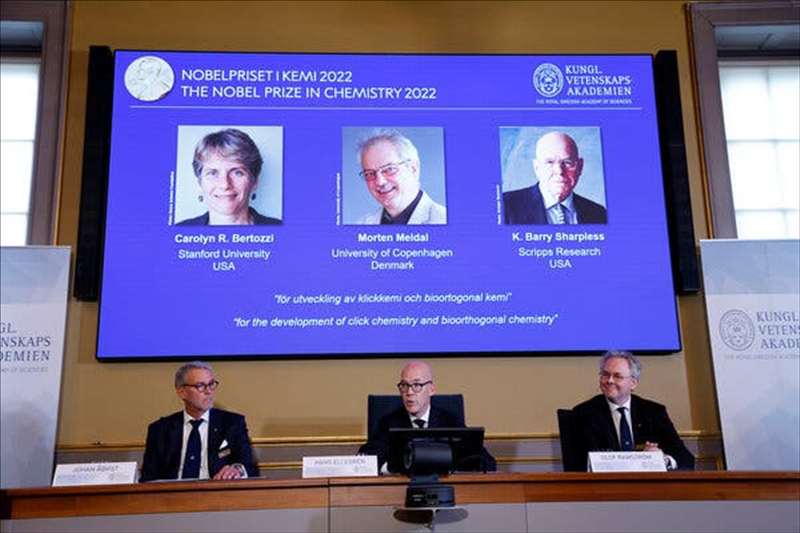 Carolyn R. Bertozzi, Morten Meldal and K. Barry Sharpless were honored for their advances in “click chemistry,” which could have important applications in treating and diagnosing illnesses.

The Nobel Prize in Chemistry was awarded to Carolyn R. Bertozzi, Morten Meldal and K. Barry Sharpless on Wednesday for the development of click chemistry and bio-orthogonal chemistry — work that has “led to a revolution in how chemists think about linking molecules together,” the Nobel committee said.

Dr. Bertozzi is the eighth woman to be awarded the prize, and Dr. Sharpless is the fifth scientist to be honored with two Nobels, the committee noted.

Johan Aqvist, the chair of the chemistry committee, said that this year’s prize dealt with “not overcomplicating matters, instead working with what is easy and simple.”

“Click chemistry is almost like it sounds,” he said of a field whose name Dr. Sharpless coined in 2000. “It’s all about snapping molecules together. Imagine that you could attach small chemical buckles to different types of building blocks. Then you could link these buckles together and produce molecules of greater complexity and variation.”

Shortly after Dr. Sharpless coined the concept, both he and Dr. Meldal independently discovered a chemical reaction called copper-catalyzed azide-alkyne cycloaddition, known today as the crown jewel of click chemistry.

“When this reaction was discovered, it was like opening the floodgates,” Olof Ramström, a member of the Nobel Committee for Chemistry, said in a briefing after the laureates were announced. “We were using it everywhere, to build everything.”

Her work “revolutionized the way we can analyze or see molecules in the living body,” Dr. Ramström said.

By pioneering a method for mapping biomolecules on the surface of cells, Dr. Bertozzi later devised a way to build click reactions, or complex molecules, inside living organisms. These so-called bio-orthogonal reactions have since been applied widely to pharmaceutical developments in cancer, DNA sequencing and material sciences.

“The field of click chemistry is still in its early phases,” Dr. Bertozzi said in a call after the announcement, adding that there were “many new reactions to be discovered and invented,” as well as new applications to be found in industries like biotech, and in treating and diagnosing illnesses.

She emphasized the importance of click therapy in medicine and “drug delivery,” which involves “doing chemistry inside living patients to make sure drugs go to the right place and not to the wrong place.”

“These are areas that will be very strongly impacted by click chemistry, and they already have been,” said Dr. Bertozzi, who earned her Ph.D. in inorganic chemistry at the University of California, Berkeley, in 1993.

The Nobel committee said in a statement that “click chemistry and bio-orthogonal reactions have taken chemistry into the era of functionalism,” adding that “this is bringing the greatest benefit to humankind.”

The key was to find “good chemical buckles,” Dr. Aqvist said. “They have to react with each other, easily and specifically. Morten Meldal and Barry Sharpless independently found the first perfect candidates that will easily snap together, and importantly they won’t snap with anything else.”

Dr. Aqvist noted that click chemistry “can now be used for building drug molecules, polymers, new materials and many other things.”

“I’m absolutely stunned. I’m sitting here and can hardly breathe,” Dr. Bertozzi said after the announcement. “I’m still not entirely positive that it’s real, but it’s getting realer by the minute.”

While she said that she had not yet had time to consider how to use the award money, Dr. Bertozzi noted that “to the extent that the prize casts a light on chemical biology, that’s a wonderful thing.”

As well as Curie, the other double Nobel laureates are John Bardeen, Linus Pauling and Frederick Sanger, the committee noted.

The chemistry prize is the third Nobel given this week, after the awards in physiology or medicine on Monday and in physics on Tuesday. The prizes are among the highest honors in science.