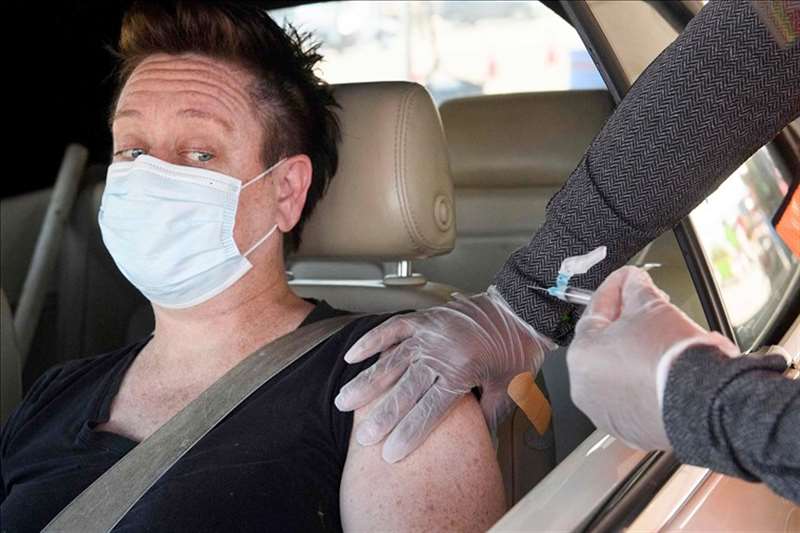 Could those visuals, ostensibly making this all seem routine, backfire?

More than causing squeamish people to look away or change the channel, researchers say such illustrations could hamper efforts to get a broad swath of U.S. residents vaccinated.

Bottom line: Many people don’t like needles, and that could further slow vaccination efforts as winter turns to spring when supplies are expected to multiply and efforts to get the hesitant to sign up for a dose will intensify.

“Fear of needles was one of the barriers that was a significant predictor of people saying, ‘I don’t think I will get this vaccine,’” said Jeanine Guidry, an assistant professor at Virginia Commonwealth University who researches visual communication and conducted a survey of 500 people in July.

And it’s not just TV news using what could be sensitive video footage.

Such “fear visuals,” Guidry said, “get more attention,” and may be remembered longer than other types of illustrations.

Legitimate efforts to encourage vaccination may have also inadvertently sparked fear by showing exaggeratedly large syringes, said Guidry, who urged public health experts to be careful with their messages, too.

“If you use a picture of a huge syringe that looks twice the size of my head, that makes you go, ‘OK, that’s big,’” said Guidry. “I can’t fathom what that would do to someone who has a needle phobia.”

Even attempts to reassure people by showing leaders such as Dr. Anthony Fauci or the president and vice president getting their Covid-19 vaccinations on TV can be triggering, said Hillel Hoffmann, an independent communications consultant and freelance writer in Philadelphia.

Some people avoid needles because of fear of pain, some from fear of fainting.

“I know those pictures are supposed to psych me up for the fact that the vaccine is safe and available, and I’m not worried at all about the vaccines’ safety,” said Hoffmann. “But what I can’t take because of my fear of needles is looking at a picture of someone with a small-bore needle buried in their deltoid muscle.”

But fear of needles contributes to some people’s vaccine hesitancy.

“There’s a perception that people who work in hospitals would be less afraid of needles, because they’re surrounded by them all the time, but one study found 27 percent of hospital employees who did not take the flu vaccine said it was because of needle fear or they did not like needles,” said Jennifer McLenon, an infection preventionist at Henry Ford Hospital in Detroit who completed the study while getting her master’s degree in epidemiology.

Another study found that 18 percent of health care workers in long-term care facilities felt the same way, she said.

“Some people avoid needles because of fear of pain, some from fear of fainting,” said Geller. “And some people do faint.”

It may have an evolutionary basis, said Thea Gallagher, an assistant professor and the director of the clinic at the Center for the Treatment and Study of Anxiety at the University of Pennsylvania. “We know from evolutionary biologists that seeing a sharp object going into our bodies is not something we are supposed to be cool with,” said Gallagher.

But Geller and Gallagher said barriers created by this fear or phobia could be lowered with careful public health messaging, along with self-help techniques individuals can practice or, in severe cases, professional assistance from a therapist.

Public health messaging should avoid drawings that exaggerate the size of needles or syringes, “which are not helpful,” said Geller, noting that the covid vaccinations involve “a small syringe and needle.”

But, as to the effect of those TV images night after night? Well, it could go either way.

McLenon, the researcher from Michigan, said she has heard, anecdotally, that those shots on TV “make people more afraid.” “Can’t we get some pictures of the vials or something else?” she suggested.

For instance, Hoffmann, the writer, said if he were designing the perfect visuals for a Covid-19 vaccination campaign, it would not refer to injections directly at all.

“If I were to drive by a drugstore and it had a poster in the window saying ‘Come get it today for your family. Do it for the nation. Do it for the public good’ We would all know what the ‘it’ is. They don’t have to show it.”

Still, McLenon and others say no one has yet studied the effect specific images about the Covid-19 vaccine have on people because it’s so new. And the desire to get back to a more normal society may help those with a fear of needles push themselves to get a covid vaccine, whereas they might not feel the same way about, say, an annual flu vaccination.

Hoffmann, who said his fear began after extensive dental work as a child, said he intends to get a shot. But when his turn comes, he said, he’ll likely be very nervous; his heart will race and he will sweat. Unlike some people with a fear of needles, he does not faint, although he understands that reaction.

“A lot of people assume that what I’m afraid of is the pain,” said Hoffmann. The worst part for him, he said, is how he can’t control his fear in that public setting. And it’s embarrassing. “I’m not alone when it happens. The person giving me the injection sees it. I can’t hide it.”

Whether it’s one or two shots, experts suggest a variety of steps to help people who struggle get through the process:

You can request being inoculated in a reclined position.

“It’s nothing to be ashamed of. We come by it honestly,” said Gallagher from the University of Pennsylvania. “Anxiety is likely making it into a bigger monster” than it should be. “It’s not worth beating yourself up about.”