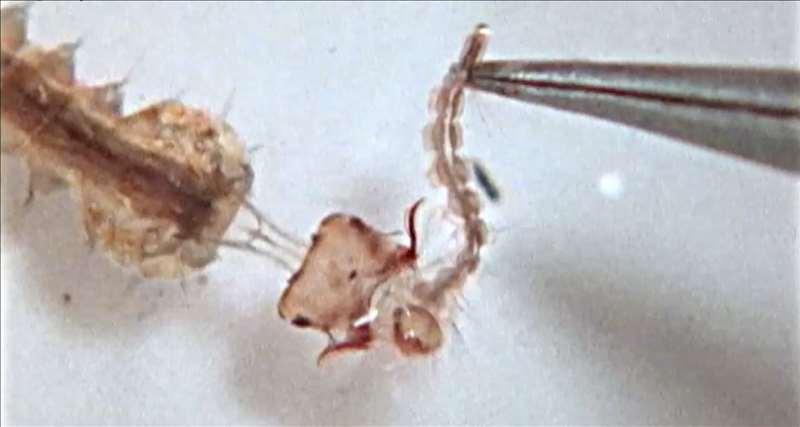 A new study shows mosquito larvae feeding in slow motion, under a microscope, for the first time.

The most recent natural phenomenon brought to light by microcinematography is both wonder and horror and involves one of humanity’s greatest foes: the mosquito.

“Our jaws dropped as soon as we saw it,” said Robert Hancock, a biologist at Metropolitan State University of Denver who led the research. “None of us could believe what we saw.”

“Not only are they large,” Dr. Hancock said, “but they’re beautiful mosquitoes, with different iridescent features, green and blue banding, and they have gorgeous legs that they wave around.”

He began studying the mosquitoes more closely, and noticed that, when they were larvae, living in water, they would hunt other insects — often other mosquito larvae — and eat them fervently. “It looks like one of those contests where they’re shoving hot dogs into their stomachs,” he said.

But the actual moment of capture, when the larvae chomped down on their prey, happened too quickly to observe. Only after 30 years of technological development was Dr. Hancock able to get the kind of detailed footage needed to study that second of action. He also filmed larvae of the mosquito species Psorophor ciliata, which had even more powerful and farther-reaching harpoon heads.

L.J. Zwiebel, a mosquito researcher at Vanderbilt University who was not involved in the new study, compared the larvae to apex predators like sharks and lions. “These are very sophisticated, highly evolved predators, that happen to be larval stage mosquitoes,” he said.

“These ‘simple systems’ are actually marvelously complex,” he said. “And that makes mosquitoes so dangerous — they’re so good at succeeding in becoming large populations of adults that are hungry for blood.”

Toxorhynchites amboinensis mosquitoes actually aren’t disease vectors, and they survive mostly on plant juices. But, as voracious larval predators that feed on other insect species, they have been used as a way to control the growth of dangerous mosquito populations. “Most mosquito-control strategies, and most mosquito surveys, occur when the mosquitoes are in the water,” Dr. Zwiebel said, adding that a better understanding of larval stages will probably lead to more effective management strategies in the future.

Still, he said, to someone familiar with the complexity of mosquitoes, this kind of predation was somewhat expected.

Dr. Hancock concurred, noting that it was really the intricacy of the behavior that astounded him: the elegance of the insects’ movement, the cold precision of their steely harpoon jaws. “At the bottom of all of this, you’re talking to a scientist who’s more of an artistically oriented person,” he said of his own interests. “It all starts with that curiosity and that fascination that so many of us have for the natural world. And then you can sneak in the detail.”

Dr. Zwiebel said, “These are stereotypic programed behaviors that have evolved because they work.” Then he paused, and added, “And, they are beautiful.”