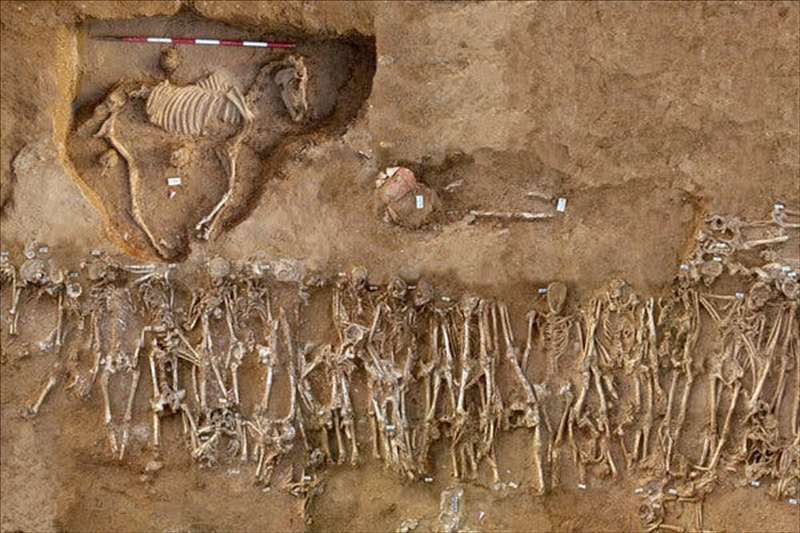 DNA from a 2,500-year-old battlefield in Sicily reveals that mercenary soldiers were common, if not the Homeric ideal.

Wherever there is an out-of-the-way war, there will be mercenaries — hired fighters whose only common bond may be a hunger for adventure. Some join foreign armies or rebel forces because they believe in the cause; others sign on because the price is right.

This was true in ancient Greece, although you wouldn’t know it from ancient Greek historians, for whom the polis, or independent Greek city-state, symbolized the demise of kingly oppression and the rise of citizen equality and civic pride. For instance, neither Herodotus nor Diodorus Siculus mentioned mercenaries in their reports of the first Battle of Himera, a fierce struggle in 480 B.C. in which the Greeks from various Sicilian cities united to beat back a Carthaginian invasion. Mercenaries were considered the antithesis of the Homeric hero.

“Being a wage earner had some negative connotations — avarice, corruption, shifting allegiance, the downfall of civilized society,” said Laurie Reitsema, an anthropologist at the University of Georgia. “In this light, it is unsurprising if ancient authors would choose to embellish the Greeks for Greeks aspect of the battles, rather than admitting they had to pay for it.”

But research published on Monday in the Proceedings of the National Academy of Sciences suggests that the ancestry of the troops defending Himera was not as strictly Greek as historical accounts of the time would have it.

The victory was widely seen as a defining event for Greek identity. But the new study, an analysis of degraded DNA from 54 corpses found in Himera’s recently unearthed west necropolis, found that the communal graves were largely occupied by professional soldiers from places as far-flung as Ukraine, the Baltic region (modern-day Latvia) and Thrace (which today is Bulgaria).

Angelos Chaniotis, a Greek historian at the Institute for Advanced Study in Princeton, said the new study cast new light on the composition of the battles at Himera, if not on their outcomes. “It confirms the general picture that we had from ancient sources, highlighting at the same time the role of mercenaries,” he said. “Mercenaries are mentioned in our evidence, but they are often hiding in plain sight.”

David Reich, a geneticist at Harvard whose lab generated the data, noted that their paper “suggests that Greeks minimized a role for mercenaries, potentially because they wanted to project an image of their homelands being defended by heroic Greek armies of citizens and the armored spearmen known as hoplites.” Presumably, armies staffed with commandos-for-hire would undermine this picture.

The tyrants who ruled Greek Sicilian cities in the Hellenic Age recruited soldiers of fortune for territorial expansion, and in some cases because those rulers were wildly unpopular with their citizenry and required bodyguards. “The recruitment of mercenaries even spurred the use of coinage in Sicily to pay them,” Dr. Reitsema said.

The Sicily of antiquity, rich in resources and strategically located, was home to both Greek and Carthaginian colonies, which for a long time coexisted amicably. But when Terillus, tyrant of Himera, was ousted by his own people in 483 B.C., he called on his Carthaginian allies to help him retake the city.

Three years later, the Carthaginian general Hamilcar Mago sailed from North Africa to Himera with an expeditionary force estimated by Herodotus at more than 300,000 strong. (Modern historians put the figure closer to 20,000.) But cavalry and foot soldiers from two neighboring Greek Sicilian city-states, Syracuse and Agrigento, came to Himera’s aid, and Hamilcar’s troops were routed and his ships set ablaze. When all seemed lost, the general is said to have killed himself by leaping into a pyre.

In 409 B.C., Hamilcar’s grandson, Hannibal Mago, returned to settle scores. This time, the Greek army consisted mainly of citizens of Himera, with few reinforcements. The Greeks were defeated, and the city was razed.

The graves and the western necropolis at Himera were discovered in 2009, during the construction of a rail line connecting Palermo and Messina. The site has since yielded the remains from more than 10,000 burials. To archaeologists, one of the best indicators of a mercenary — foreign or local — is burial in a communal grave.

The dead found in the mass graves at Himera were all adult men. According to Dr. Reitsema, distinguishing the combatants from everyone else required “several lines of evidence.” Traces of violent trauma, such as spearheads lodged in a body, implied that an individual had died in action. “We didn’t find armor and weapons, apart from those embedded in bones,” Dr. Reitsema said. “Those items would have been recovered by the survivors on the battlefield.” The dates of the graves, based on stratigraphy and a few scattered objects, closely aligned with the dates of the historically documented battles.

Determining which bones were Himeran and which were Carthaginian was a matter of location. Alissa Mittnik, a Harvard geneticist responsible for the genomic analysis, said the deliberate burial of the fallen within the necropolis denoted that they were part of the Himeran army rather than the enemy.

“While we know nothing of the manner in which members of the Carthaginian army were buried,” she said, “it was typical in Greek warfare for the victor to allow the enemy access to the battlefield to remove its dead.”

Chemical isotopes in the mercenaries’ bones indicated that the soldiers were born far away and that their parents and grandparents were not immigrants. And the ancient genomes were sequenced and compared to all published genomes, Dr. Reich said: “The ones those new genomes are closest to are those from Ukraine and Latvia.”

Dr. Mittnick speculated that the hirelings may have arrived at Himera with the army led by the tyrant Gelon of Syracuse. Diodorus wrote of 10,000 foreign “colonists” whom Gelon later rewarded with citizenship, although their geographic origins are unknown.

“We know that many of the young men in the mass graves likely grew up outside of the Mediterranean but might have come to Sicily for the promise of citizenship or monetary rewards,” Dr. Mittnick said.

Beyond highlighting the disparate genetic backgrounds of troops, the research showed that genetic ancestry informed which bodies were interred in which graves. “The intentional groupings of foreigners sheds light on the internal logic of the identity constructions of Greek colonists,” Dr. Reitsema said.

Foreign fighters from a variety of backgrounds were buried in the same mass graves: sufficiently respected to be buried in the necropolis but still differentiated from many other persons of Greek descent. The smaller mass graves, in which soldiers probably were Greek, show the signs of greatest care in body placement and burial objects, indicating greater reverence or prestige than the outlanders.

Britney Kyle, an anthropologist at the University of Northern Colorado and an author of the study, said the research demonstrated the power and potential of new techniques to illuminate what life was like in the past.

“Too many studies of ancient DNA focus only on genetic results without fully exploring the biocultural background to contextualize their findings,” she said. “We’ve made a concerted effort to bring together information from historical accounts, archaeology, bioarchaeology and isotopic analyses to contextualize the genetic data. It’s amazing what we can learn when we weave diverse lines of evidence.”

Of all the surprises Dr. Kyle encountered while fact-finding, the biggest may have been the distances over which some of the mercenaries traveled to reach Sicily. “We think of warfare as causing or deepening divisions between people,” she said. “So it is fascinating to think of war as something that could bring people together.”